This was "Semana Santa", Holy Week, when we are supposed to do penance for our sins and prepare for the major Catholic Holiday of Easter. Instead, too many of us hit the beach in a display of secular serious partying (Thursday and Friday are national holiday). Though I assume excess alcohol and sun on your head could lead you to out of body mystical experiences.

So what is a candidate to do if he does not want to offend those still practicing their religious duty or those in serious reveling? Well, for Capriles, you pray at church and visit beach goers.

Capriles went to do his Semana Santa devotions at Petare church  where we are told he usually goes. I am a lapsed Catholic, I certainly cannot confirm you that info. However what we can confirm is that Capriles visit this year was preceded by a scuffle as local chavistas thought it would be a good idea to create trouble for a religious visit. Electoral visit too, of course,  but it was a church and Capriles was not going to hold a meeting. Just your average photo-op. It goes to tell you the degree of nervousness chavismo is experiencing these days. 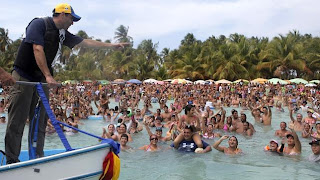 Once his religious duties fulfilled, Capriles is careful to cultivate his image of devoted Catholic, to the Virgin Mary in particular,  he decided that it was time to hit the beaches. But how can you catch the interest of the folks stewing in piss warm water, on beaches where no sand can be seen anymore? You rent a small flotilla and sail in front, close enough that the few that know how to swim can reach for you as a Messiah threading water. Another set of great photo-ops.

I particularly like the one of run down pier where tourists embark(ed?) for Morrocoy. Maduro's campaign is simply unable to create such striking moments. 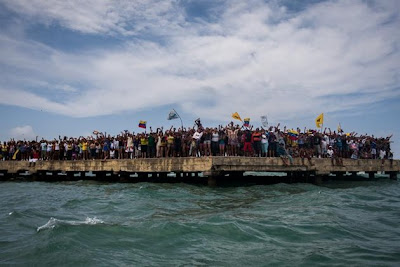 Speaking of chavismo. This one had troubles because,  well, they are in mourning for Chavez. Photo-ops of happy chavistas cheering Maduro at the beach certainly would cause a weird reaction, maybe counter productive. So poor Maduro was left to find "creative ways" to pin down all the evils on the country over Capriles  Yes, he has started mentioning Chavez less in his speeches and more Capriles which is yet another sign that the campaign design is not working as planned and changes must be made.

It turns out that real creativity being in the Capriles camp, this one announced that he will start his official campaign next Tuesday in Chavez home state, Barinas. This has simply been a shocker for chavismo which is still reeling that the Capriles campaign is named after Bolivar (Comando Simon Bolivar). That Capriles is cheeky enough to hit Barinas running is too much.  So what does Maduro did? He accused the opposition to make a campaign of violence. Yeah, sure....  In Barinas Capriles is going to attack a governmental rally with sticks and stones, and cow dung.....

But there is a surprising area where Maduro is trailing badly in spite of all the resources he has at hand  such as the ones to create all sorts of fake Facebook or twitter accounts. On Twitter Capriles has 2.3 million followers while Maduro, after three weeks of campaign  has barely crossed the half a million mark. Same story in Facebook where Capriles has almost 1 million "like" while Maduro does not have a page but his blog has only 26K likes...  Not that it matters much vote wise if you ask me, but it is also a telling sign of poor campaign organization and motivation. Chavez did better.

Thus three weeks of campaign and Capriles is holding the line much better than expected considering the onslaught of chavismo media.  No major pollster, I was told, is going to publish any significant poll before the vote. But we know that chavismo has the means to run polls, tracking or not. There are rumors that the numbers are not good and that the once upon a time wide 14% gap in Maduro's favor is closing too fast for comfort. Of course, those are rumors, not even real leaks, but if you look at the pictures above, you know that something is not quite kosher this Pesach ....

PS: I leave you with this little jewel about Maduro creatively making the opposition the "heirs of Hitler". this of course while he presides over the lone country still supporting Assad in international organizations.