After my post of Monday tossing around some numbers I thought, during the long drive back to San Felipe, that I should be a tad more serious than tossing numbers haphazardly, that maybe an abstention graph like the one Miguel gave last year would be more telling to predict Sunday's result.


For this I decided to start with October numbers, that is 20% abstention and Maduro with Chavez numbers, while Capriles retains his. 1% abstention means that 188.000 do not go to vote. And with absolutely arbitrariness I decided that this 1% divides into 4 shares Maduro's loss and 1 share Capriles loss as he clearly has a more motivated electorate. In short, the graph below starts at 80.5% participation and for each point abstention increase I subtracted 150.400 votes from Maduro and  37.600 away from Capriles. 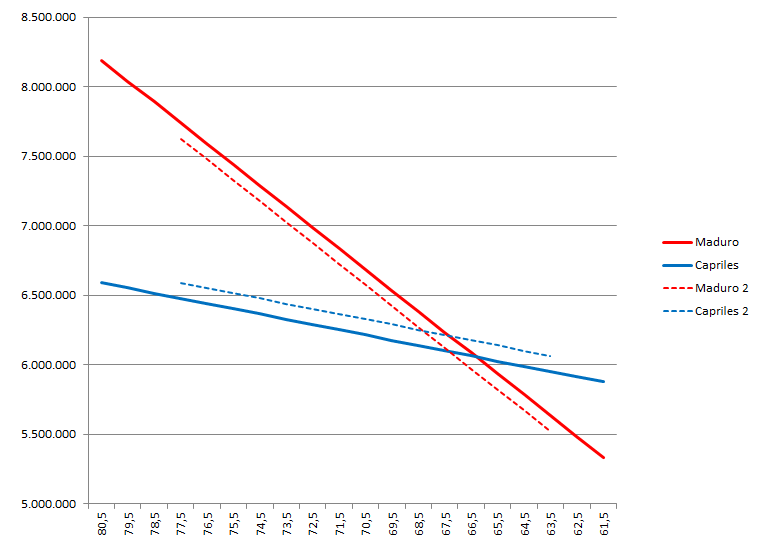 But this is just a "bottom line" of sorts which gives the crossing over at 66%. In other words, if voters vote as the automatons assumed to be above and if abstention is not at least 34% Capriles has no chance.

Now, we all know that this is not right: when you see Capriles in Maracaibo today, you know he will get back his October number while it is a given now that Maduro will not get Chavez October surprise. So let's give him a penalty of 3 abstention points just for himself until abstention starts hurting Capriles too. Thus you have the dotted lines which give now a crossing of the lines at 68/69. A little bit better.

Of course  I can keep playing with numbers at will and improve every line until I get Capriles trashing Maduro by zillions..... For example  not all groups start abstention at the same time and these groups are not the same size. I could say that abstention starts slowly for Capriles as it starts in the country side and he gets bigger drops when cities stop voting? Or that excess heat or excess rain slows down the voting of retirees for Maduro....  Let's not get started.

However we can at least say one thing: no matter how excited Capriles supporters may be, and no matter how many chavistas are willing to cross over, we can safely assume that Capriles needs 30% abstention to neutralize Maduro. Keep this in mind Sunday as you scan for hints. If at 5 PM abstention is less than 30%, get ready for another let down.... The little bit we know from polls do not bring solace, they vary in their prediction from 25 to 35...... In a particularly emotional election, this one may not be decided in the mind of a good third of the country until at least Saturday night.

For those who want more wonkish stuff (I am not a trained statistician though my intuition has proven often more accurate than expected).  You should go, if you can read Spanish, to @YVpolis blog. In his latest entry he gives one scenario (escenario 1, in the third graph) where Capriles can win, and it is with an abstention of 30%.  It seems that either from educated political intuition or hard number gazing from hisotricla precedents, +/- 30% abstention may well be the golden number.
Posted by Daniel at 4:07 AM