I may be away and busy but news come crashing about what an awful country we have become (never mind that my Latino American colleagues at the meeting I am attending feel bad and pitiful towards me and Venezuela...).

Two events marked most than any because they tell us more about how chavismo manages to retain control than anything else we heard recently. And I am not talking vote buying or corruption or repression: I am talking using Venezuelan "culture" to show that chavismo is the way to go .


I am going to start with the easy one: candidate Maduro video where he states that Chavez reincarnated as a little bird, or sent a message to Maduro through a little bird. I am not going to go into how unfit for high office is a professed atheist that finds himself suddenly praying alone in a wooden church. I am not even going into him hearing little bird messages.


I am putting the video because you do not need to understand a word of what Maduro says, I want you to watch the people around him, the hieratic semi circle position of the followers, watching and approving any nonsense from the newly appointed high priest of the revolution.

This of course has also its roots in popular old customs where the guest sat a home sit in a semi circle around the host in deference. One of the many cultural "parameters" that Chavez used so well in his TV appearances, making it a personal reach to each and everyone.

The second is the looting of a broken down beer truck at El Palito highway exchange through which I go at least a couple of times a month in my way to of from Caracas.  An account of the story is here.

The first picture is a general scenery from El Carabobeño. The second one is from Notitarde, a close up of El Pueblo. 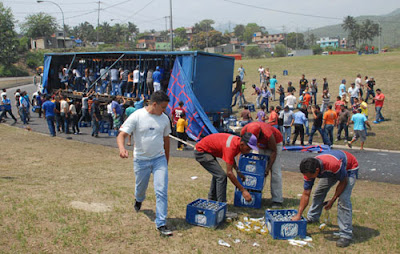 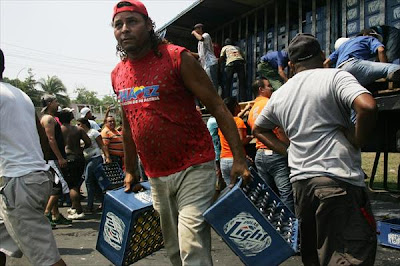 What can we say from these?

First, there is no security, even in a major highway, even near a very settled location where people should know better.

The fact of the matter is that it is now perfectly OK to loot trucks that break down in Venezuela. They should not break down, period. El Pueblo has the right to loot.  Probably the police, if available, prefers to stay away and wait for the end of the looting, the more so if it is a beer truck.  Needless to tell you that traffic stopped and drivers preferred to wait for the end of the looting least they would be looted too.

As for the close up, besides showing a red chavista t-shirt (others in the above picture), you can see what the lumpen chavismo looks like....  even poking holes in the shirt for ventilation  But you also see in the background people, shall we say better dressed, that you would not think would participate as easily in a looting scene.

And this is where I go to the tile of this post. Chavismo has deliberately created a state of anarchy and dependence so as to secure a chunk of the electorate  I do not know whether these people above represent a 47%, or a 10%, or indeed an October 55%, what it is certain from these pictures and the video above is that chavismo has created a mind frame in a sector of the country that acts like that video, loots like this truck.

Romney was wrong with his 47% comment that may have cost him the election  After all, even in the US a chunk of that 47% are expected to work, and do so, people that cannot vote for the Republican party as long as it keeps its positions on gay rights, abortion, creationism and what not. But people that work hard nevertheless, pay taxes, etc.... but are "granted" for the democratic party as long as the GOP does not do its aggiornamento.

It seems unfortunately that politicians are finding it easier to create division, to establish beholden sectors of the population so as to ensure a reliable, unshakable base of votes. And in its extreme from we see what we see in Venezuela where moral corruption is at the essence of the system under establishment, be it the corrupt officials that nod at any inanity of Maduro instead of walking out in disgust, be it the the guy looting a truck knowing full well that no Nazional Guard is going to interfere in this sacred chavista right to loot, to steal, to abuse.

This is our true social inheritance from Chavez.