The electoral future of chavismo as seen in East Germany 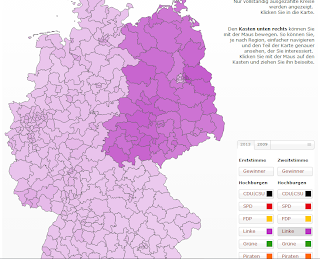 So we had a smashing victory for Merkel yesterday in Germany though it will be rather difficult for her to establish a solid coalition since she blithely disposed of her FDP allies. But that is her problem. What is more interesting for this electoral maps freak are the gorgeous voting maps results published all around.  In Speigel I found this one that made me think a lot: the percentile results for Die Linke.

See, Die Linke is the freak far left party founded by those who never digested the end of commie East Germany. True, they did try to improve their brand with a few SPD dissidents but the result is that contrary to what happens in France with Front de Gauche, no one wants to be caught dead with Linke leadership. Not the SPD, not the Greens and less the CDU of the FDP.


So, the West Germans brought them freedom, repaved their roads, brought real welfare that works even if limited, made sure electricity and heating were available, that there were many bratwurst brands available at the grocery store, etc...  but also brought to East Germany work ethics and the like. Heck, even the Kanzlerin is from East Germany. Apparently that has not been pleasing for many, up to 20% + in some areas (deeper lilac color). Thus East Germany still exists in electoral maps, with a lighter small island of former West Berlin.

This is what I expect will happen in Venezuela where a hefty percentage of the population in 15 years have been told to expect all from the Chavez state with little if any work to be shown for it, besides attending occasional beer drenched political rallies. Thus there might not be a specific red area in Venezuela but there will be for decades to come a red hue all across the country that will try to sabotage any recovery process that we may try once we finally get chavismo out of office.

Email ThisBlogThis!Share to TwitterShare to FacebookShare to Pinterest
Labels: blogging as a way of life, chavismo