Do they really want to vote for that?

I am sorry, but the more the time passes the less I understand why people, even if blackmailed, still vote for this fascist farce that chavismo has become. Today I was doing some errands to try to set up a new TV for my S.O. who has a full month of medical rest at home before he is fit to work again.  So I went to a Compumall store to find some connectors, something that until early November I could always find. This is what I found this time around. 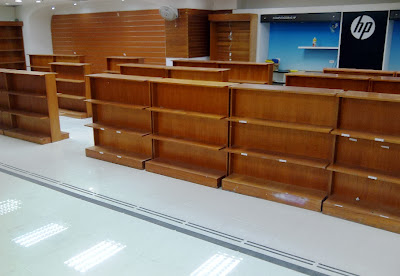 Clearly, the owners of CompuMall, a very decent electronic and office store chain in the past, at reasonable prices, are either unable to replenish inventory or unwilling to do so ( I did buy the lap top I use to type this entry in the Las Mercedes store, this is the bottom of El Recreo store, still open for business for a paltry selection of paper goods at the entrance).

Clearly you can see in this spectacular set the failure of Maduro's November hit on electronic stores. We cannot even find a normal, average, little cable to connect a DVD to a TV set. All is gone except for half a dozen HDMI cable in a corner.

And does el pueblo care?  A couple of weeks ago in San Felipe I went to the bank at the Makro store and the usual line was there. I have already published pictures of this line in previous visits as my bank agency is at that Makro center.  This time I happened to be waiting my turn with a Makro employee and was thus able to get the sordid details. 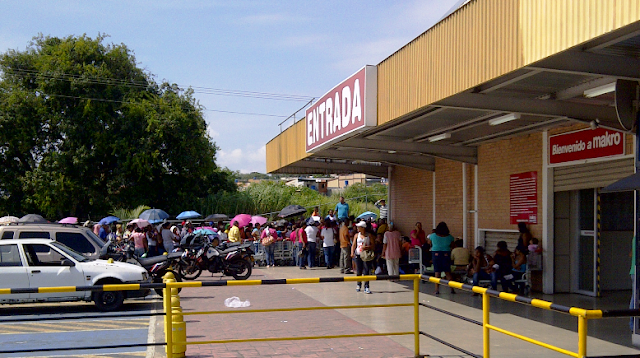 See, Makro has been forced to open a hole in the wall to serve these "customers" that only come from basic staples foods. Since Makro is like a kind of Cotsco, that is, a membership store, it became very quickly a mess to deliver hundred of "daily pass" for people that only came for 4 pounds of corn flour or a small jar of margarine. So in this picture on the right you can see the hole in the wall. Click to enlarge. 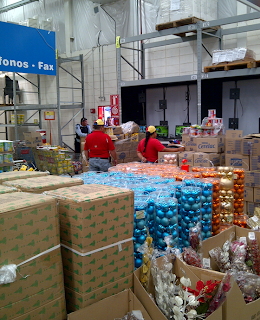 But this is not the whole story.

First. I could not take that picture and I had to hide behind a stack of Christmas ornaments to take that picture, pretending to talk on the phone while they got distracted. and turned their back.

Second, the line is now there EVERYDAY as more and more stuff is delivered irregularly. That day was a good one, Harina PAN, rice and Cerelac.

Around the window they stock the rationed goods which even though billed by Makro ARE NOT delivered by them but by government representatives, duly red shirted with the 4F baseball cap! They allocate to each customer that stood inline under the sun whatever the "catch of the day" is.  Observe also that they have at least 2 computers which is weird since there is only one line reaching the new "window". A simple cashier machine would have sufficed, no? What are they checking on computers? (click to enlarge). Also, if you are a normal customer you have no access to these goods, you need to stand in line. Once upon a time in some other stores those who went for normal purchases were allowed to pick  up the rationed stuff without making a line with those that only came for that stuff. The protest trouble generated by el pueblo made it difficult and normal customers are thus punished in any store.

The conclusion is simple: either you are poor and depend on basic staples and get screwed by having to go through hurdles under the sun and long lines, or you are middle class and are equally screwed even though the nature of the action is different.

Truly: are people going to vote again for people who keep bringing us increasing daily life difficulties?  You tell me, 'cause I am befuddled...
Posted by Daniel at 12:13 AM

Email ThisBlogThis!Share to TwitterShare to FacebookShare to Pinterest
Labels: 2013 elections, abuse of power