Happy shoppers who voted for Maduro

[MAJOR UPDATE]
This week like most business in Venezuela we finished up our years work and closed down until mid January. So I was shopping around these past two days to set up our farewell little Christmas gathering at work and it was a nightmare.  I do not know what happened between Thursday and Friday but San Felipe suffered a nervous break down. There were humongous lines everywhere as finally toilet paper, corn flour, chicken and what not arrived, all together at the same time.  So I have this little photo reportage to show you ONLY part of what I saw Thursday and Friday.

We will start with the Central Madeirense, the lone big supermarket chain in San Felipe. When I went yesterday I could not get in. Corn flour had arrived and for crowd control purposes they only allowed people a few at a time through the BACK DOOR. It did not matter that I told the main gate that I could not care less for Harina PAN, if I wanted in I had to go through the back door!


You may think that the first picture was all the line and you would be wrong. Observe on the picture that there is a cage of sorts with garbage bags. Look for the same feature on the very left end of the top picture so you can tie the two lines. And the people you see at the end are the line make a turn and go down the street. That I did not have the strength to go and take a picture too...  Not also that the line on the top picture also goes all the way across most of the building until it reaches the back door of the store.

But you know what was the worse part? People went through all that ordeal and got out buying ONLY the 4 kilos of corn flour they were allowed to take. Most did that huge line and they did not take the opportunity to buy other stuff, only the corn flour, not even, say, a can of tuna. It was not difficult to see, bags are semi transparent..... UFB!  Needless to say that I passed. But next day was not going to be any better. 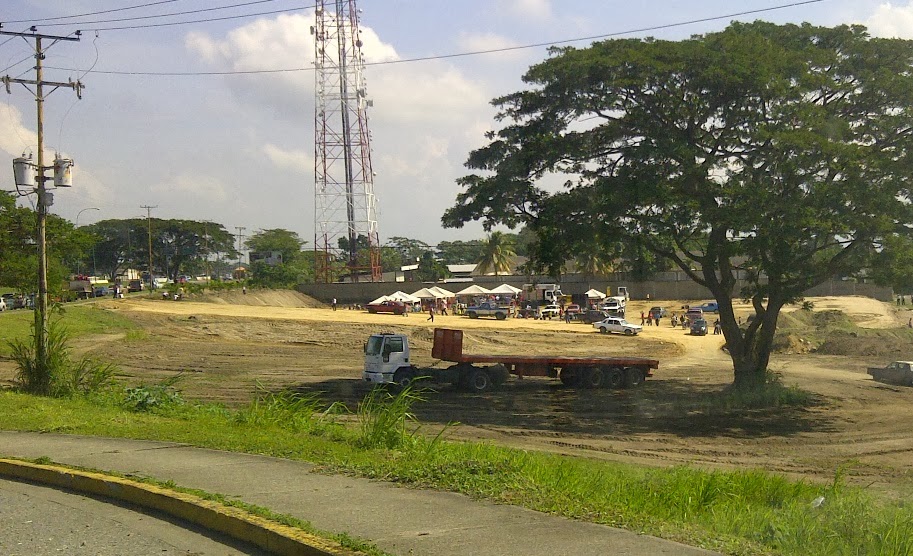 On my way back to CM this morning I observed that in the industrial park of San Felipe the regime had set one of its occasional "operativos", a state sponsored distribution of X,Y and Z. Since it was in a hollow for once I had a perfect view from above, away from the Nazional Guard that may forbid me to take pictures. Thus I went ahead, drove around to find good angles.  The first one above is a general view from the highway ramp.  I took it from my car before driving and park on the top left embankment where the next two pictures were shot. But I am putting this picture above because that tree, which probably will die from root damage due to the leveling of the land they did recently, is a gorgeous tropical tree with enough shade for a big truck. 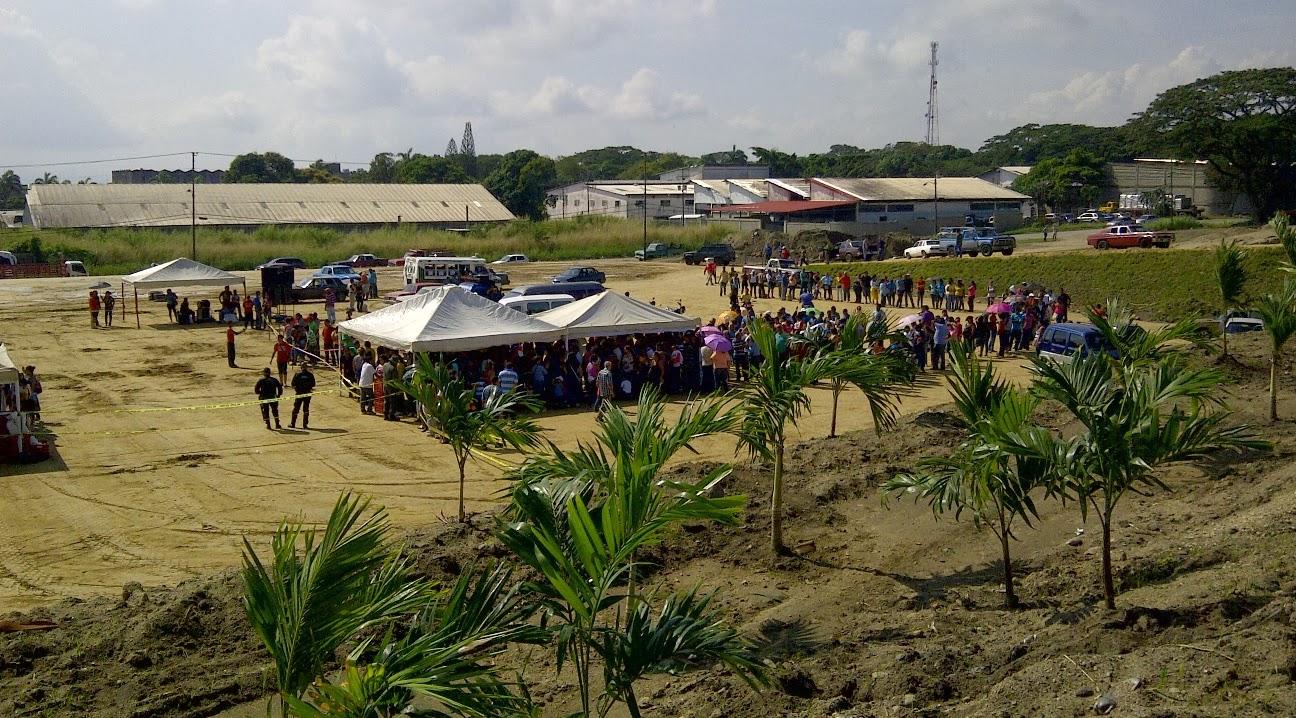 From the road later I had to take two pictures to have the full perspective. There are two selling areas, one was grains and the other rice I believe. From the bags carried by people I could tell it was no brand name whatsoever, just some stuff imported or repacked by some governmental office. People there mostly come by foot or public transport: this is lower quality stuff, cheap when not a gift if you have a state coupon or something. Note that there is a tent in the back with huge speakers so you have loud salsa music all the way to the highway where I am parked. They would not want you to think while you are in line under the sun.  Notice also (click to enlarge) that there are Nazional Guards and militia to make sure that rioting does not start, in particular if the food stuff ends with people still on line.... By the way, the land has been recently cleaned up and they even planted in a hurry some palm trees in the embankment. Dare I suggest that the project is to make this a fair ground of sorts for food rationing distribution?

This picture is on the left of the above one and people can go there once they are done with the first one. Hence the absence of line. Well organized rationing if you will.  Since I was in a rush I could not stay to observe longer to see whether there was services offered, propaganda, etc. something that I have seen in other instances. But form this you can gather for yourself that the regime may be unable to run the country but it is quite organized for activities that bring in the vote.

My return to CM was a nightmare. This time around I could enter but at 10 AM it was crowded as hell: toilet paper had arrived!!!!  And I saw people staying in line for an hour or so just to buy toilet paper, nothing else. And it was not a matter of lack of money for may of them: they looked like they could buy whatever they wanted in the store. No, it is just that the standing in line for a given item has entered their everyday routine.  I could not deal with it, so I went back to work, got somebody to help me and had that person stand in line at the cashier while I fought my way through the CM aisles to get what I could get. Of course two of the items of my list were unavailable. 2 out of 8. Not bad actually.....

And yet in all that driving I saw many lines at other stores. Of course I could not afford the time to check in, but there was the one at a store called Mikro that worthy of two more pictures for this report.  The picture above is the street entrance. Observe that some are in line umbrella and all and that many are sitting in the shade, probably taking turn with people in line to refresh some. Observe also the white large door on the far left, it is the point you will connect to the next picture.

This was all for a single day. There was also a big line at Makro, just as the ones that I have already published in previous posts. All in all, I counted a dozen sites with big lines in two days, and I was not looking for them, they just crossed my path in my errands.  The whole thing had a feel of war relief effort finally arriving............

All of these people should be happy, no?  They all voted for Maduro last Sunday.

Today El Universal publishes front page a poll on what people think causes shortage. We get some numbers:

Besides the funny side of the one decimal precision on this type of survey (Venezuelans seem to believe numbers the more decimals this one has) it is quite clear that the scarcity, the shopping lines, etc. are the responsibility, the fault, of the government and yet one week ago the regime got again 50%+ of the vote.