Will Venezuela default on its debts? 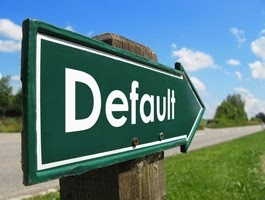 The question that has become "the question" since last Wednesday devaluation is will Venezuela go into default. The question is not idle because any half brained analyst of economical matters like yours truly can see that even though the regime has announced it does not have money to pay for the private sector debt it still has a few measures it can take to avoid default and honor that debt, even if late.  The problem here is that the regime is debating internally to go into default more as a political measure than any actual economic reality. What is discussed, in short, is a politically driven default.

To understand this better let's look at some short term options quite accessible to the regime without creating a major social upheaval.

The regime has already started limiting travel possibilities. This absurd that subsidized overseas travel has been should have never existed. The regime should have sent outright airplane fares and foreign usage of credit cards at a higher exchange rate coupled with a tax to avoid revealing the true nature of devaluation. For example, as Ramirez announced Wednesday, you could buy your plane ticket at 11,3 VEB for 1 USD plus a 25% "luxury tax" which would have given you an implicit VEB value of 14 (1). Easily a billion or two of USD can be saved that way. The majority of people upset by this would be people that do not vote for Maduro, anyway.

Gas can also be hiked to still cheap but to a level where it starts becoming again an expense.  Say, 20 cents of a dollar to a liter. By US standard it is still dirt cheap (and a gift in EU standards) but at least at that price gas contraband with Colombia lowers, people with jalopies need to service their car betters, etc, etc. We can expect another 1 to 2 billion in savings for 2014, until further gas hike are politically possible. This saving would be coming very simply from gas we would not need to import anymore and give for free.  Admittedly here a portion of chavista constituency is touched but the inflation is going to dissolve the gas hike effect anyway and at that level it is cheap to offer bus drivers a slight subsidy to avoid fare hikes (gas today does not represent much more than 1 or 2% of the bus fares).

The regime could also cut down for a year any weaponry purchase. The regime could limit travel by public servants. The regime could close a couple of dozen embassies that are of no use for Venezuela like those in Africa with which continent we do not even have a direct flight from Caracas. The regime could place certain imports like booze on a 25% luxury tax and make their rate of import at 14. Electric bill and gas bills which are only paid by the middle class can also be boosted at more realistic levels (I pay, with an ALL electric household, barely a couple of dollars a month in San Felipe, in Caracas it reaches a meager Hamilton or two). Easily a couple more of billions of dollars appear and as we sum it all, voila, at the very least half the genuine debt of the private sector is covered while remaining social Misiones flagships like Mercal or Barrio Adentro remain untouched.

So why must we contemplate a default on the private sector debt?

The big, BIG, regime problem is to maintain the financial support to its ideological allies, even though some of them have been sort of dumped already. Namely, the biggest bill of all is the one for supporting the agonizing Castro dictatorship. Let me give you a simple example that I know as a fact. In the former "luxury" Hilton of Barquisimeto, duly expropriated by the regime a few years ago, there are a few stories (2? 3?) which are occupied by Cubans. These Cubans are not engineers or space scientists, they are construction workers for Mision Vivienda. Not even Maître d'Oeuvre, construction workers, paid in dollars, with an even larger amount in dollars paid directly to the Cuban government . You will not find paper trail, just go and talk to them. When things like that happen, how can we evaluate truly what portion of our income is sent straight to Havana? At the direct expense of the chavista worker, by the way (2).

If we take as true the number that Venezuela may be sending almost free of charge to be at the very least 10 billion of USD a year to Cuba, we could solve a lot, A LOT of problems by simply cutting that one in half. But the regime does not want to do that. Why? The Cuban outflow is, to begin with, a source of graft for the regime which in turn gets a lot of Cuban help in civilian control and power abuse. Inside chavismo there are many that truly want to work for the Castros at all costs, who truly think that the Cuban revolution is an admirable tyranny, who think that sacrificing Venezuela for a wishful eternity of Fidel's dicta is a very small price to pay. Since this is as close to religious sectarianism as you get, we cannot be surprised when these people think that the current crisis is also a good opportunity to get rid of private enterprise. That Cuba is getting back towards some form of private property, or that the iron curtain fell decades ago or that China is the most capitalistic country in the world does not cross their minds whatsoever. After 15 years of mental masturbation there is nothing we can expect from that crowd.

A default of private debt offers a genuine opportunity for the regime to bankrupt any private sector business it wishes to bankrupt, to force into a partnership those that are willing to cede to or share control with chavista operators in order to survive. In short, default is a way to nationalize the private sector without publicly announcing it. And not paying the owners the value of their business since debt payment will be the price they'd be forced to accept to save their good name. This official robbery should not surprise anyone, it already started last October when for political reasons commerce was looted while this week we also got the "legal" instrument which allows the regime to seize business under any excuse such a mistake in price labeling.

That is why we can state that at this point any default by the regime is politically driven much more than financially driven. But fear not, a real default will come soon enough anyway.

1) The real value of the VEB is found in a black box. On paper, considering how much is in circulation the parity should be 60 to 1 dollar US. But if you travel and compare prices its value would be around 30. Obviously this subjective value varies according to travelers and the countries they visited. Yet, if we assume that the real value of the VEB should be 30 for the USD (and not the 70+ absurd value of the speculative black market) an exchange rate of 15 for travel is already big subsidy to travel and serious travelers, those that do so for business or to visit family can understand that real well and raise no objection.

2) Another dirty secret of chavismo is that many foreign companies, in particular Chinese ones, have their own workers laboring under different rules than the ones for the Venezuelan workers, rules that have dropped the productivity of the Venezuelan worker calamitously since Chavez reached office. A simple slight liberalization of Venezuelan labor laws, which are flouted anyway through corruption and bribes, could not only save a few hundred of millions of USD but would also help greatly lower unemployment.
Posted by Daniel at 6:57 PM