Altamira then and now: a Venezuelan spring?

Condemned to immobility in my little Podunk I decided to rest most of the day rather than anguish. After all Maduro was trying to do his counter offensive with a big rally in bolivar Avenue (which was not a success no matter how many public employees were forced to attend). So there would be cadenas, Saturday morning shopping, etc, until action started, if any, late afternoon.  It did, in Altamira square, again.

As I was perusing twitter to get the news (reminder: airborne media is censored in Venezuela) I observed quit a few twitters hysterical about Altamira, that it did not work in 2003 and it will not in 2014. Some chiming in that should know better. So, since this is a history minded blog I thought that as public service I should remind people that History has a way to look like repeating itself but it never does.

For the third night in a row there is open battle in Altamira, one of the most emblematic sites of Caracas. One of the criticism thrown at students protesting there is that it is an easy target for the regime provocation, that it is associated with the bourgeois opposition and what not. Maybe there is a grain of truth, maybe it is time to organize better the protest, to coordinate it and move it elsewhere, etc. But it still remains that Altamira today is not Altamira of past days.

The Altamira of 2002-2003 was led first by dissident military. It was an isolated event in the country. The Altamira of later years, with also large repression, was also often an isolated event. But the Altamira of today is not isolated. To begin with the current protests STARTED IN THE ANDES region before the fuse got lit in Caracas. Protests today were also held in at least 3 other areas that I am aware of, regardless that today is a traditional shopping day in the provinces, and thus a bad day for protests.

Yes, it is true that in Western Caracas nothing stirs, yet. But it is also true that many from the West go East to protest. It is also true that in the West we have a heavy dependency on regime's handouts, a lot of blackmail and a lot of survival instinct in the willingness to stand in line for meager allotments of Harina P.A.N.  But the only different between East and West Caracas is that the fuse is different but it exists in both sides. What is scaring the regime a lot is that the fuses seem to be merging already in as single one outside of Caracas and that is what makes all the difference with the protest this week against those of years past.

I also want to point out that no matter what the regime tries to do in pointing the responsibilities for the trouble to Lopez, this one has not been seen on any barricade since the 12.  He hardly can be considered the leader of a set of protests in almost a dozen focal points of the country. In fact, he leads nothing.  This is spontaneous anger at a situation that is not changing whatsoever, or getting worse. This is a Venezuelan spring that will create its own leadership at some point, if any.

We are past the point of discussing whether these protests are worthy. They may not be successful in toppling Maduro, he may succeed in repressing for a while, but something new as started. To be continued.

A little bit of cheesiness may be helpful here :) 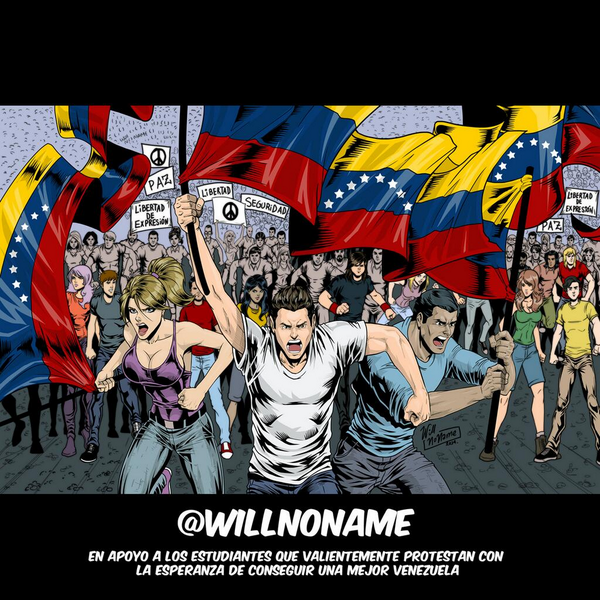