Is any one surprised?

There is no telling the funk I am this morning. Never in my life I thought that I would have to live in a declared dictatorship. But after last night, this is what it is, a bona fide fascist dictatorship.

Now, the only thing that surprises me is that there are people that are surprised, people that try to minimize, people that have no clue yet.  Truly, de Nile springs eternal.

Where to start?  Well, with me, since charité bien ordonnée commence par soi même. Which means that to survive and help others you need first to ensure that yourself will survive and be in conditions to help. Since there is little that I can physically do here in San Felipe, I can only suggest that to survive the onslaught of dictatorship you need to have your mind clear about what this means.

This time around I am going to write "I told you". I told you because as far as I am concerned Venezuela has been an official dictatorship since the last trimester of 2010 when the outgoing Nazional Assembly neutered in a decisive and permanent way the freshly elected assembly so that this one could not fulfill anymore its functions. That the opposition never made this a war cry has always befuddled me. Today we are paying the consequences.

But the opposition for some obscure reason has always wanted to hide from itself the true nature of the regime, a corrupt and increasingly narco directed mafia. This could have been seen way back, in 1999 when so many supported what was an illegal referendum on a new constitution that I am proud to say I was in the lone 10% that voted NO.  A second warning was made in December 1999 when between Christmas and New Year the judicial system was taken over by chavismo. This is when the dictatorship we start suffering in full this month started its slow but steady development.

And then we went from mistake to mistake in the naive hope that at some point so many people were going to be for us even electoral fraud could not be enough to save the regime. Well, in April 2013 victory was stolen outright from us, and the opposition denounced adequately the electoral fraud. And that was that, we started preparing the municipal elections of December to validate our claim of April. Of course lost in December 2013 as the opposition electorate was profoundly demobilized and its leadership criticized.  And now we are in this mess because people got fed up enough to go to the street and prove that we are a majority. We are the majority because I do not see anyone defending the regime besides its hired goons and professional tweeterers that are actually becoming quite silent if you ask me.

I do not want here to blame Capriles or Lopez. For better or for worse they did what they did and now they have to pick up the pieces of their mistakes, mistakes that have been duly written about and not only in the pages of this blog. I do not think they are clueless, that they did not know: they just did not make the right political choices and there is a price to pay for that. Unfortunately Lopez is in jail and the regime is trying to put right now as I type the whole country in jail. We are left with Capriles who has now to prove once and for all of which timber he is made, just as the regime is preparing to put in jail all the mayors of Voluntad Popular, Maria Corina Machado and who knows how many other politicians, journalists and, why not, bloggers.

But cluelessness does not reside only in politicians.  It is also in the media, from major media to bloggers that prove once and again that they are only consistent in their inconsistency.  A worst offender this time around is the envoy of BBC in Caracas who writes articles using the exactly same cliches used over 15 years. For example rich versus poor, without stopping for a second to wonder that the millions that are protesting cannot be all rich otherwise chavismo should be getting an Economy Nobel prize!  Does BBC shops and see the empty shelves or do they come with their care package of Stilton and scones?  Fortunately BBCMundo is more on top of things. Maybe they should talk.

I do not want to defend the foreign press but they are tired of us, always the same story for 15 years. They need now a good dose of necrophilia to come back to us, and they are getting it. Maybe not as Ukraine does, but just you wait.  At least we can count with the Washington Post who has been clear of years, with yet another spectacular editorial. The Wall Street Journal also does good stuff but they are on pay and hint too much of economy whereas the WP is sharply focused on Human Rights. And the New York Times? Well, it is not quite the same since Romero left.  European press goes from the ambiguous Guardian to blissful ignorance, or courtesy footnote. But at least they have a provisional excuse, Ukraine and Putin are at their door. Spain is something else, as chavismo lost almost any support there long ago, very long ago.

The only one that has come through, and that because they have to, is CNN en Español, the Spanish language version which is much better than the English one if you ask me with insufferable people like Anderson Cooper, gay or not. CNNE has been excellent at letting regime personel dig their own grave. anyone with a modicum of intelligence and education can only but be shcoked at the interviews made to Chaderton, Jaua or one of their underlings.  Even Maduro was caught trashing CNN while they passed live his attacks, confounding the rascal.  This morning after the night of terror that we suffered CNNE transmitted live the speech of Capriles that is blocked in any TV or radio of Venezuela.  Let's see how long it takes for CNNE to be booted of the cable grid as it happened for Colombia's NTN24, who also came through for us, for as long as it could.

So here we are. Now even people like Teodoro Petkoff are going to have to use the D word.  This is a dictatorship and there is no excuse for anyone anymore. It does not please me to have "been right" for so long because I am trapped in the same shithole as the ones in denial are.  Heck, I am not even expecting an apology!  What I expect is that we all do our duty, call spades "spades" and act accordingly.  For better or for worse Capriles is our leader right now and spoke accordingly reminding people that tomorrow, after we pick up the bodies assuming that the regime succeeds in its repression and sends us back home in fear, the economic debacle is just starting and the regime so far has done NOTHING to stop it, preferring to seek political confrontation to run away from it, classical fuite en avant.


The country is about to suffer economic collapse.

This is the way I followed the highlights of Capriles speech, since he is not on TV and my Internet is too feeble for watching it on line.

Now you all stop crying, all stop complaining, all stop telling the student what they should or should not do: it is time that we all assume our responsibilities and act according to them to the best of our limitations.  The time of surprise is gone, the time of reality is in. We are past de Nile. 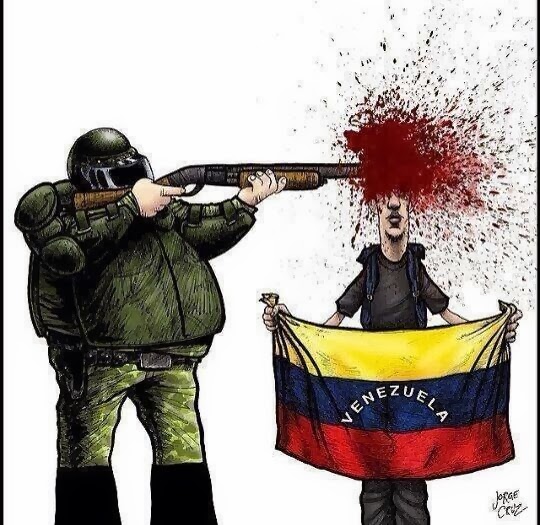