The fascists in charge of Venezuela want to kill the press, while banging students

Maduro yesterday said that he was willing to risk being called dictator but that he was going to restrict press reporting on stuff he does not like it to be reported on.  Let's start with clearing up something: Maduro is ALREADY a dictator because he claims he has won an election that he has refused to verify as the opposition demanded then last April. That the rest of Latin America has decided to screw the opposition (and democracy and human rights) and recognize Maduro anyway does not detract from that fact: the opposition has documented extensively the electoral fraud of last April and the judicial system of Venezuela has simply decided NOT to review the case. The complaint was simply not received. Henceforth, as far as I am concerned Maduro is an illegitimate president, hence a dictator.

This being cleared let's look at the reasoning of Maduro.


The basic reasons for Maduro latest outburst/threats is very simple. Crime is far from going down. Protests are starting pretty much everywhere. They are still rather small and still involve only the traditional opposition and students who are always against official order, the more so when this one is of a dictatorial nature. That "el pueblo" is not joining these protest at this point is more due to them having to stand in line for food rather than any political sleep or lack of awakening. But the fuse is there, and the powder is abundant considering that there are no jobs, not much food, very poor services and inflation and extensive black market in "el pueblo" living areas. The black market is being operated by regime hacks, the "consejos comunales" working hand in hand with motor bikers getting food from distribution center by force (well, they pay but get more than the ration allowed), and reselling the items to "el pueblo" in the barrios at 2, 3 times the official regulated price. Police or Nazional Guard usually close their eyes on this because they get their cut, when not actively collaborating.  Newspaper are not keen reporting on this, but you just need to talk to any service personnel in Caracas to get the gory details. And of course, eventually newspaper are also going to report on this when even standing in line for hours does not guarantee that you will get the feed you seek (not a misspelling).

The problem for the regime is that in spite of controlling, say, 90% of the airwaves and in many areas 100% (yours truly has stopped watching TV except for the occasional show on Vale TV) information circulates. The opposition relies now a lot on Tweeter or newspapers that still publish too much negative stuff for the regime's liking. Chavismo does it through word of mouth and eloquent silences. Thus it becomes essential to muzzle once and for all the press. Already rationing print paper has been tried but it has created an uproar that is not very good, and probably makes people to want to reader papers even more and those to print more damaging charges before they go out of press. Nest step, unavoidable in fascist regimes is to, well, censor.

The attack is almost classical fascism.  For example Maduro says that no one living outside of Venezuela should own a newspaper, recalling a past anti Murdoch charge. They are not original.  Not to mention utterly dangerous since once that precedent is established I can even seize your home since, after all, you do not live in Venezuela right now, even if you keep your house if you want to return, or to let a relative stay, for example. That foreign charge is directed at the owner of El Universal, the most independent paper in Venezuela, the one that has opposed Chavez ever since 1992 (El Nacional flirted with Chavez extensively in 1997-98-99).

Not to mention that El Universal is the lone Venezuelan paper with an English section, and also publishes stuff today such as Capriles demanding that the regime stops the violent repression against the students, or that Venezuela is now one of the highest financial risks in the world while Toyota stops its operations in Venezuela (in English). Amen of its own Internet TV in progress.

This is fascism. If Maduro were a true commie he would simply decide to expropriate all newspapers and that is that. But fascists have an urge to show their power to transgress norms, to prove that they can do what they please and that the others cannot.  True, the end result is the same, we all end up in some form of Gulag/Camp, but the way there is somewhat different. Thus the fascists in charge need to pretend that they forced into that because they are respectable while the other side is scum. The commies do that in the name of "el pueblo". Both repress heavily students, there is no difference there.

This is the picture that accompanies the El Nacional note (EL universal has not written anything yet, probaly in deep sessions wish lawyers). 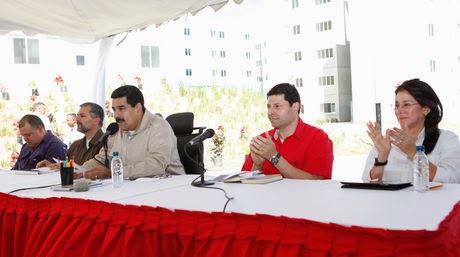 From left to right.
A fatso reading his texts.
The minister of habitat, a true fascist caught on video threatening to fire whoever did not vote for Maduro.
Maduro the wanna be dictator but who is in fact a mere Cuban proconsul in Venezuela.
The presidency manager, a guy so corrupt that even Chavez refused to have him run again as governor of Trujillo state.
And the wife, who has the biggest record on nepotism in Venezuela history. Only Gomez may give her a run for her money.