Toward insurrection? Do we still know what this is all about?

The country has awakened a mess. A delivery I was sending was returned because it could not pass through the Moron area. I have no details yet, waiting for the driver to return to San Felipe but that area which never voted less than 75% Chavez is able to see a barricade speaks volumes. And this is the problem the regime is facing, even chavista areas are starting to get upset as food is more and more absent. Even PDVAL, the state food distribution system, announced that people will be limited to one day shopping a week. Food ration card surely must be next.


Let's not be afraid of words: parts of the country are in almost open rebellion, like Tachira, and other parts are getting there.  There are already reports of killed in Tachira and the chavista governor, Vielma, has started to take its distances with the regime this morning (1).  Then again if Caracas Eastern part is blocked this morning, stupidly I have to say, the Western part of Caracas is business as usual.  Apparently the people think that blocking the Cafetal arteries are going to make the regime fall while people there cannot attend their business in a time of crisis. If they want to have an impact they need to march down to the valley and close down the "Autopista". But what do I know....

Whatever it is today I cannot follow. I have barely 100 people I follow who tweet and I am flooded, my reason put to test. For example I receive a picture that is supposedly coming from a rebellion in Tachira and I doubt very much it is in Venezuela. I mean, those flags.....


Another picture is more serious and more believable, the more so form the source. Those are pro Maduro motor bikers driving around Plaza Venezuela this morning, threatening with weapons in hand. There was supposedly going to be a small opposition even there which I assume is now canceled.

But to help keep you in the right thought process I have this picture that I lifted from Buzzfeed a few days ago. I love it because it is the best I have found to illustrate what is our real problem: it is not about black versus white, rich versus poor, it is about people that have lost their future and try in every possible way to explain that to people that have given up on their future, preferring to settle in the false security of following orders. You know, I think they both understand what the problem is. 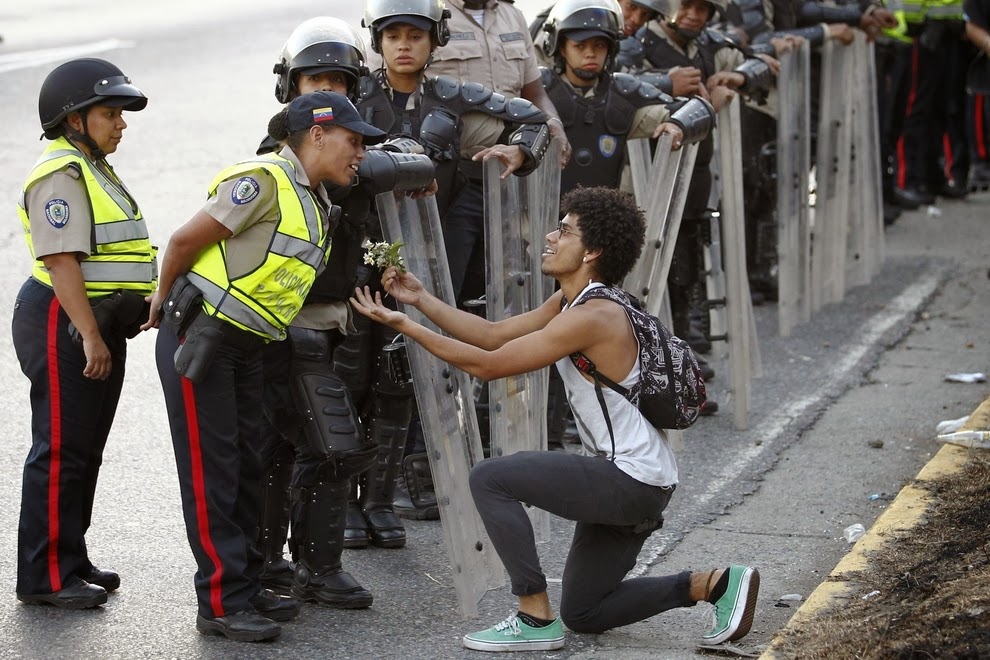 1) Vielma Mora has said that repression is too heavy and that putting Lopez in jail is not a good idea.  How do we interpret this? It is at the same time a lame attempt by Vielma not to be the one left with the bag of the consequences of repression in Tachira, but it is also a sign that inside chavismo things are coming to a head.

We should not dismiss the Vielma words today as only an attempt at cleaning his name. It is too late for that. But at least we should respect his late coming courage when he was the one that started the is whole mess by overly repressing students now almost a month ago. Vielma  is smart enough, he is probably one of the few chavistas left with more than propaganda in his brain. He was dispatched to run for Tachira governor where chavismo was sure he was not going to be elected. He was, in one of those historical accidents which may at first have benefited chavismo but could end up costing chavismo a lot.

If there is a chavista that can rise to the moment, it is Vielma Mora.  Let's see how sincere he is in the next days.  And before anyone writes that he should resign if he were sincere I am going to add that the responsible thing is NOT to resign, otherwise it would be a perfect excuse for Maduro to appoint a military governor through a state of exception.