For many personal reasons I have simply not been able to go to any of the marches in the two weeks that I was in Caracas. But today was the day, the more so that one of the marches passed close to my living quarters in Caracas.  I joined it for another reason. Marches that start from Plaza Las Americas directed towards Chacao are the ones form the hard core opposition. Usually they are not representative of the nation but the one today had potential to be a very telling march. See, after a month and a half of protests there is no better tester than a march through El Cafetal to see what the mood of the opposition is. I was not disappointed, these people are in for the long run.

Follows an unusually long entry with two dozen pictures including a close encounter with Nazional Guard (without any harm done because El Cafetal is a peaceful crowd).


Boulevard El Cafetal (also known as Raul Leoni, possibly one of our three best presidents) is a long avenue that runs for about a couple of miles from Plaza Las America to Chuao and then Chacao. The aim of the march today was to protest the Cuban interference  (more on that later). Another big march was starting in Chacao and the two were to meet at the entrance of La Carlota Air Force base to send a message to the army to ditch the Cuban colonial master.

I had to wait for about an hour for the march to reach my waiting area. I enjoyed the wait revisiting for the first time in years on foot sections of the Boulevard which used to be one of my youth playgrounds. I had forgotten how well designed for enjoyment the Boulevard had been conceived. Large walk areas, now half covered in shade with huge trees (I remember when they were tiny, just planted). If it were not for years of neglect (in part due to the regime sabotaging municipal budgets for over a decade), the chocking traffic (the regime has not even started studying a light underground subway that should be near completion today had Chavez never been elected),  Bulevar El Cafetal would be truly a magnificent residential avenue. 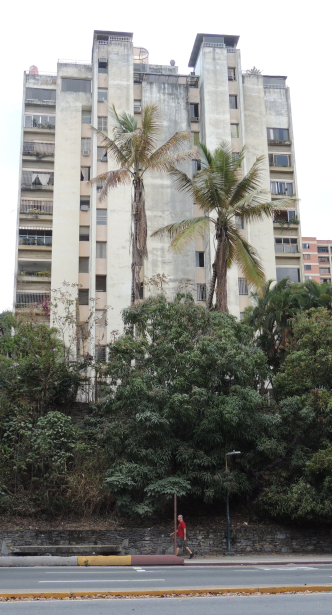 Alas now there are sign of decays in the tropical splendor where some buildings simply do not have the means for adequate maintenance, that even tall coconut trees cannot hide. A pre Havana decadence feel..... 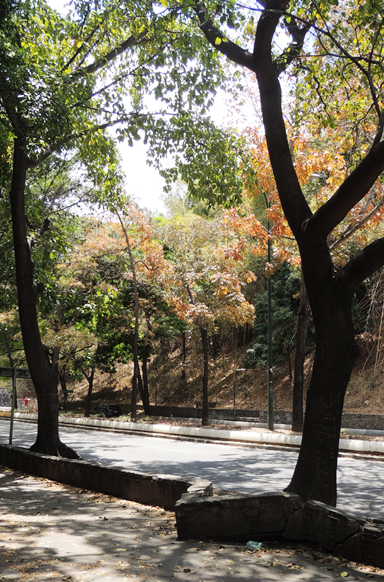 It is also the mid of the dry season, rather tough this year, and even the boulevard trees used to find plenty underground leaking water are ditching their leaves for an autumnal feel.

But I digress.  Below is the intersection of Santa Ana, the one just before the Plaza Las America Mall that tall trees are now able to hide.

At each major intersection (Santa Ana, Santa Paula, El Limon, San Luis, Caurimare, Santa Sofia, Santa Marta) there were crowds waiting that came down from their neighborhoods to wait for the march to pick them up, creating quite a flow by the time we reached Chuao.  The picture below is from the distance when we reached Santa Marta. Observe the tightly packed white wall in the distance, ahead of the truck leading the march: those are all the Santa Marta folks. 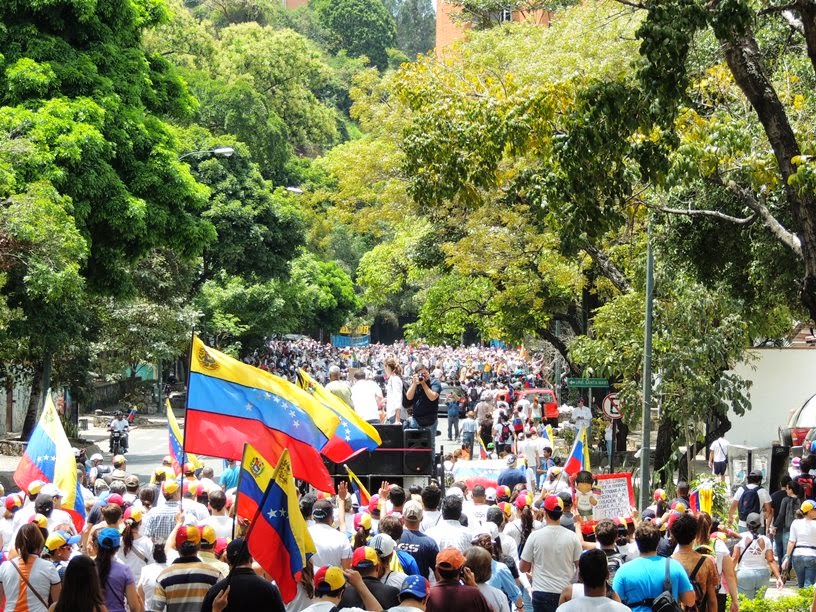 I would like to note something that the sharp observer may be already wondering: not a flag from any political party. None, I have seen none!!!!  In the two hours that I walked along, and back home. This is not about politics, about who should represent the opposition. This is about millions of Venezuelans that have had enough of chavismo, that want to reclaim their future. I have mentioned it more than once in recent posts and believe me, I could see it today in the streets. These people are primed and Maduro is going to have to kill a boatload of us if he keeps trying to impose his will against more than 50% of the country (the latest DATOS poll tells us that 64% have abandoned the regime and that now the opposition is real majority in polls of the first time in a decade). 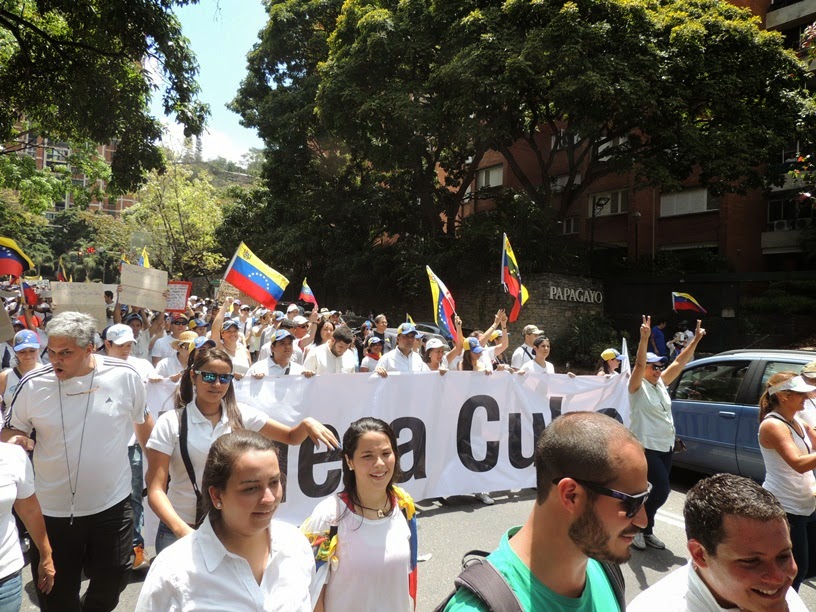 The pic above is the official front of the march, with El Hatillo mayor, Smolanski of Voluntad Popular, in attendance.  It reads "fuera cuba", Cuba go home.  I think I need to make a small comment here. In Venezuela we have had too many Cubans imposing on us and those are, well, with Fidel. The bulk is not deserting, the bulk tries to make a killing to bring stuff back hone to their families, So we have lost that distinction: they are a bunch of collaborators for whatever reason they chose to have.  Of course, we do not forget that it is an awful dictatorship, that there the likes of White Ladies and Yoani Sanchez, but we are past such niceties: the bulk is worthless and should be booted out ASAP.

Which brings us around to the Cuban embassy, a mere two blocks away form the march and HEAVILY barricaded by Nazional Guards, mobile barriers and blinded vehicles while from the truck leading the march we were begged not to approach. 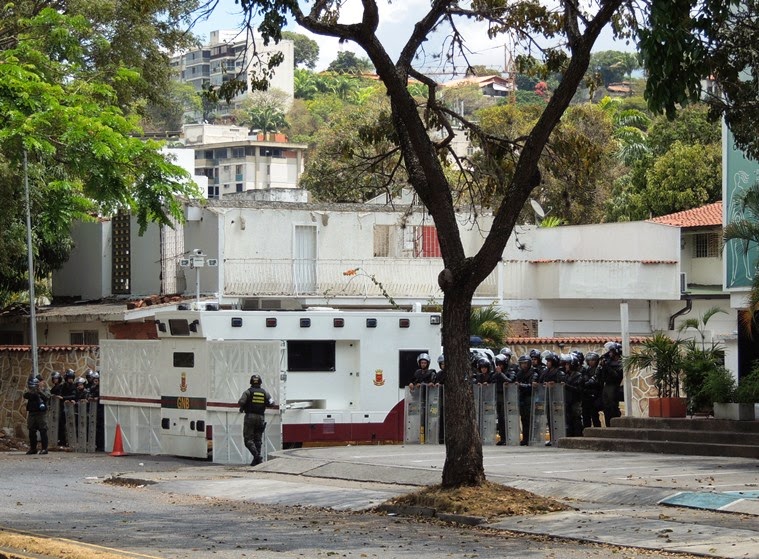 With my zoom I got a good look of them as they looked towards us nastily. I am pretty sure that the Nazional Guard selected for Cuban protection have received enough indoctrination to hate us and hurt us as much as they can when given the order.

And we reached the area of the Rio de Janeiro avenue that crosses above the Güaire river to reach the entrance of the military base. Sure enough the road was blocked by a not very strong barricade and 5 Guards. 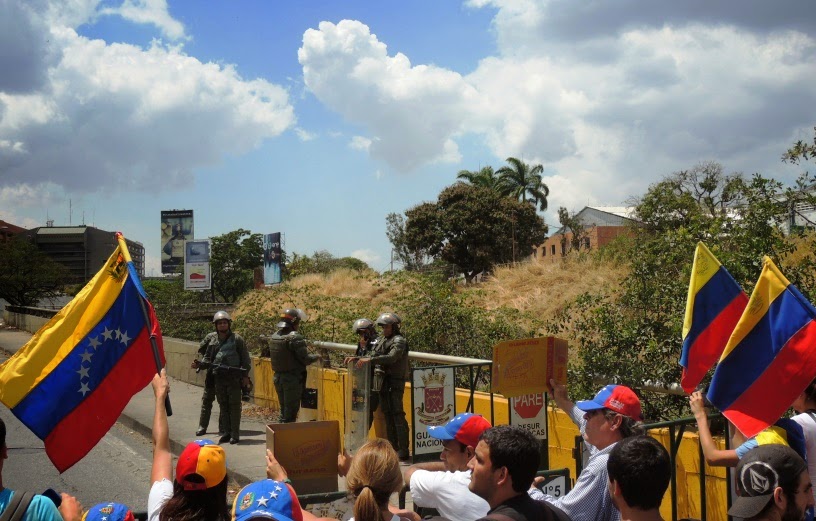 And sure enough one guy had to jump the fence immediately followed by journalists seeking hard core pictures that will reflect "the violence" of the protesters once the regime sees them. The repression of the Guard for us. But the journalists do not care, they get their headline. 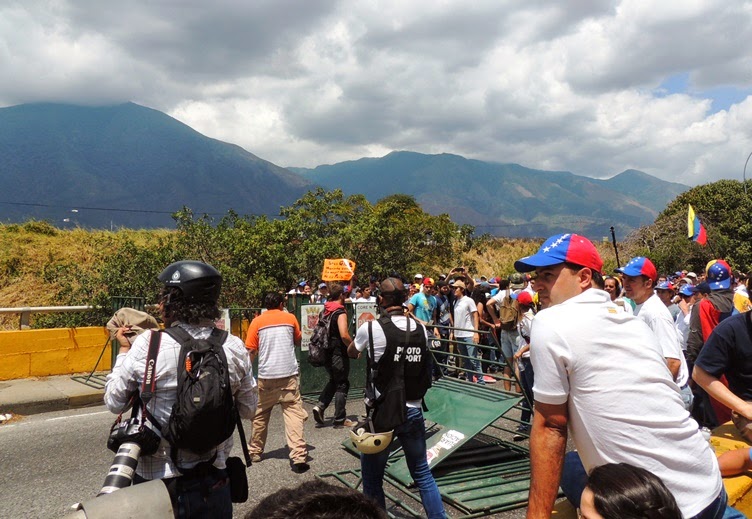 The Guards retreated to a second weak barrier, the real one being the third obstacle. Almost as if they were wishing a confrontation, you know... 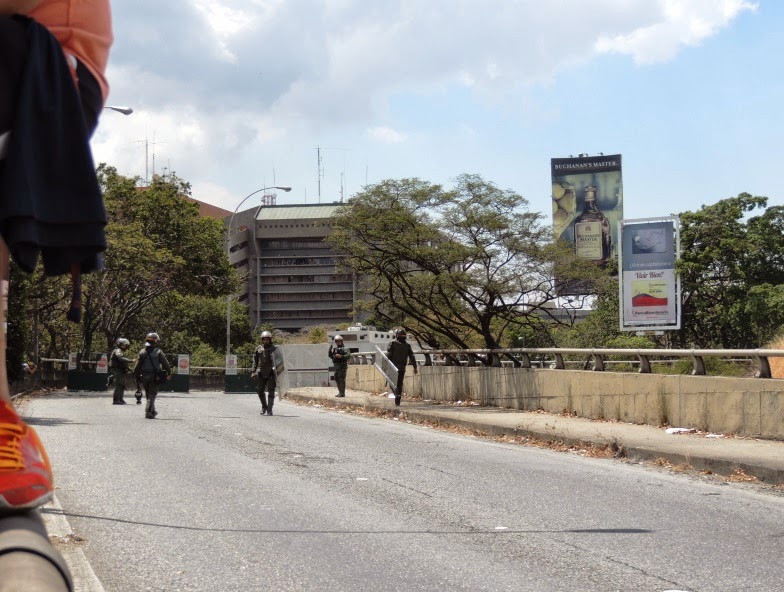 I walked along and I got this shot which when I looked at it at home showed how one of the Guards was filming all the guys that were threatening to jump the barriers. See, a month and a half of protests have created quite a few habits.  I wonder what will be the nature of the segregation list that the regime will enforce once this is all over if it manages to survive. 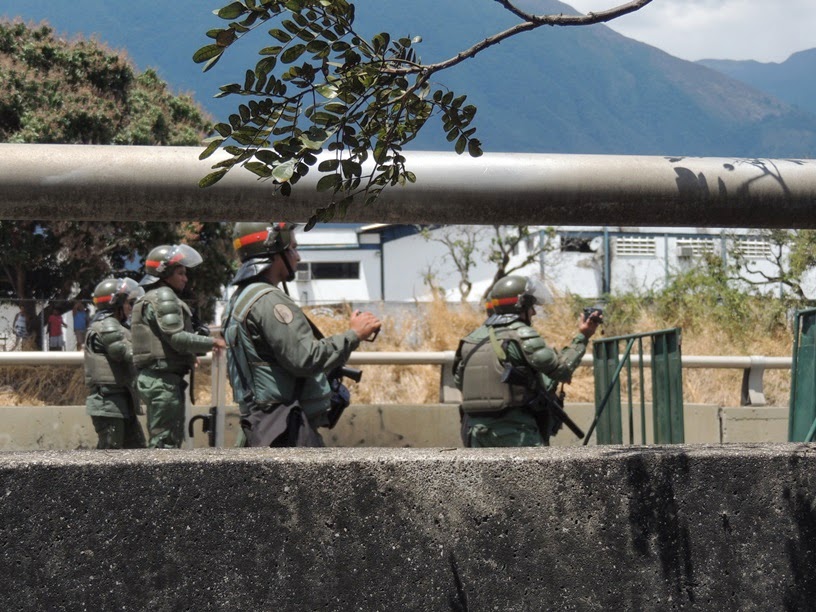 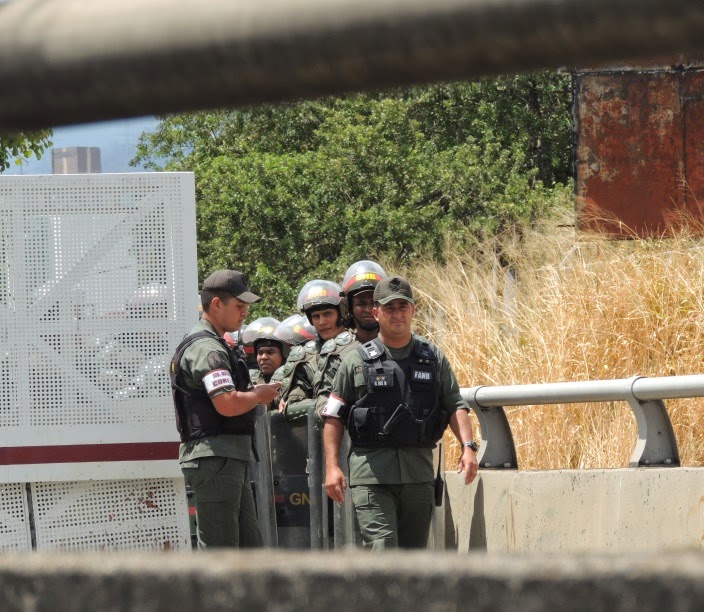 The commanding SOB officer pops from behind the real barricade to see what is going on.

There is another bridge that was also blocked. You can see the special armored trucks they have that have barriers that open wide to block. 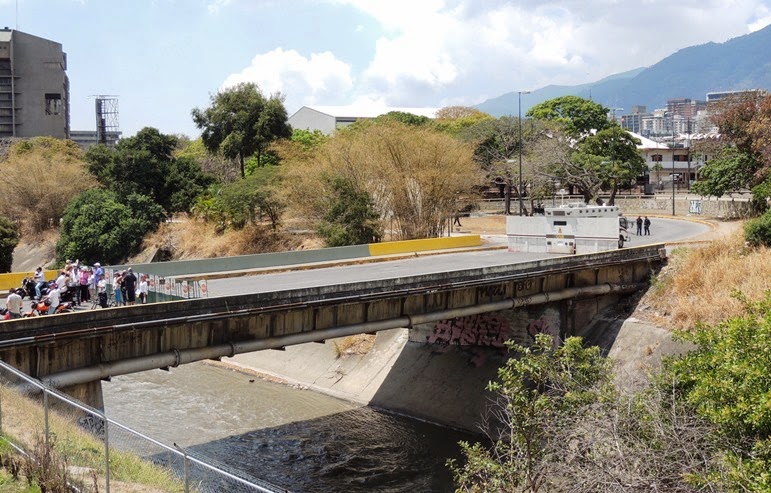 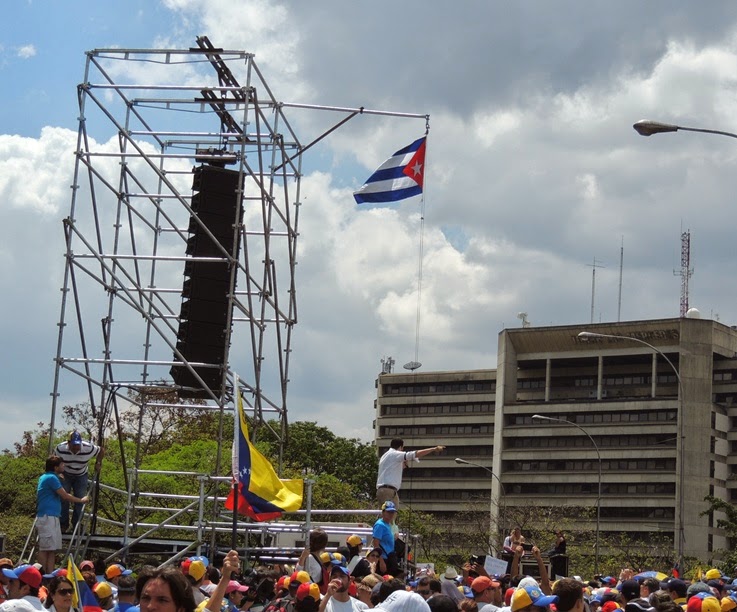 On top of that bridge there was the grand stand, that we had reached, still waiting for the folks from the Chacao march.  The part of the speech I heard was telling us that the Cuban flag would be symbolically lowered, and the Venezuelan one raised.  That we should not hate Cubans, that they were planning at their life risk for a march to support Venezuela in April. 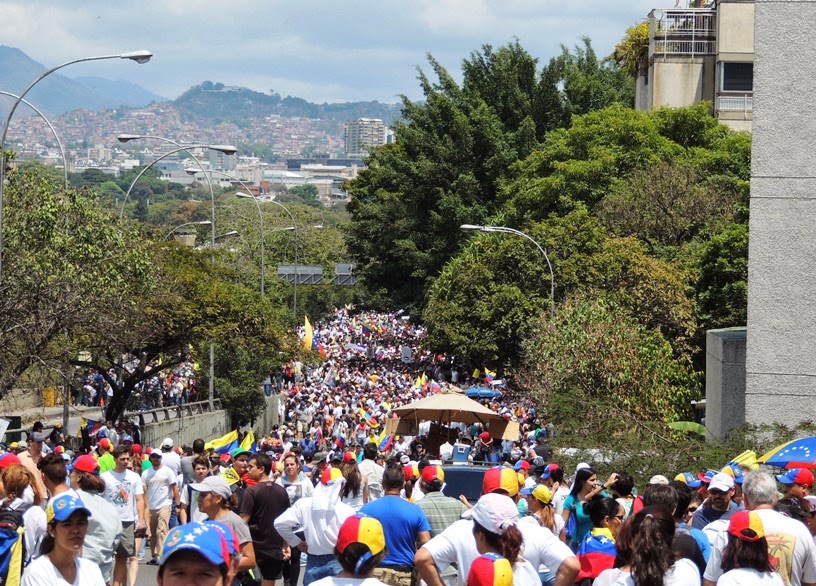 From there, I took a plunging view of the march behind me. And below a closer view of that blocked bridge as people arrived. But the Nazional Guard are waiting in the shade of the trees, which proves that they know nothing will happen, that we are not violent fascist contrary to what the regime is trying to drill in their heads (and in the rest of the world heads for that matter). 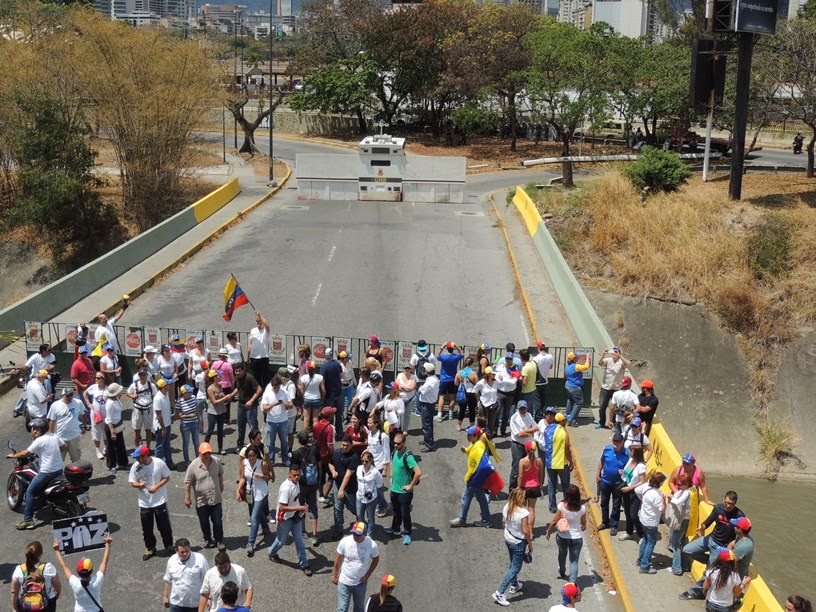 As I was starting my return, having no intention to wait for the other march, I saw when a couple of girls, a couple of photographers in tail, that jumped the second barrier, were talking with the commanding officer pictured above. Nothing came of it, the girls told him who knows what come florismo they say in such circumstances and the officer must have behaved nicely enough to convince them to go back, letting the photographers with bloodless pictures. 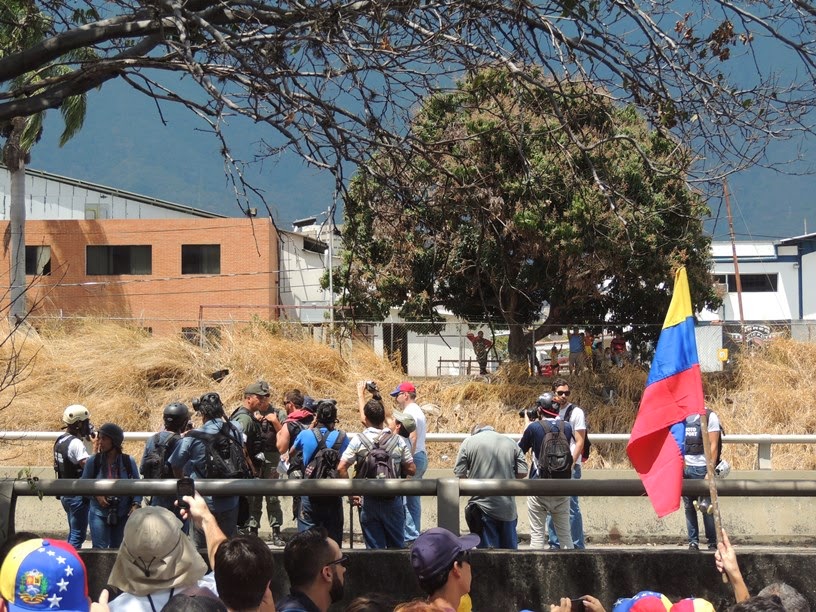 And on my way back I took yet another tropical  "fall" picture in Santa Sofia. 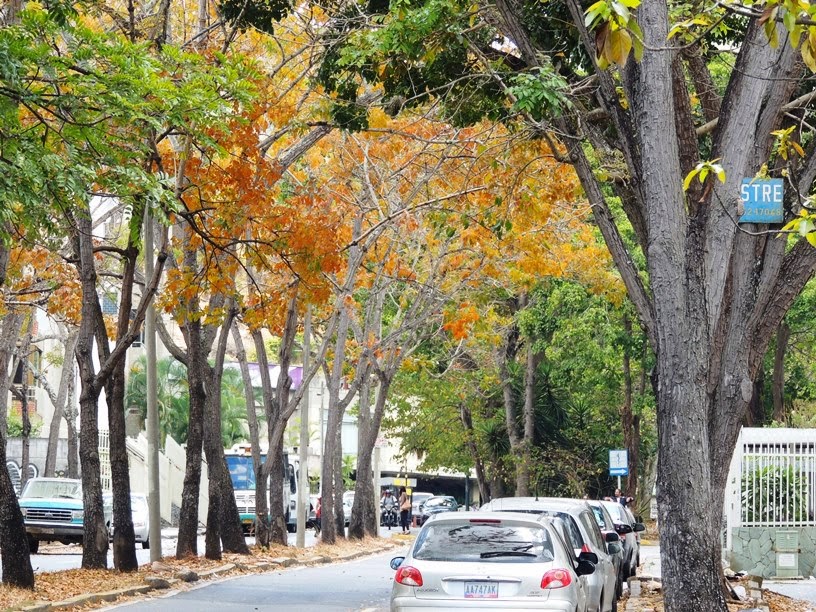 - a large part, at least, of the violence is provoked by the regime. In the hard core El Cafetal, where at least 10,000 went to march, nothing went further than what I showed above, at least as far as I know.

- I suspect that there are two type of Nazional Guard, those that control marches like above, and those that are trained hard for repression, probably by Cubans, like the ones in front of the embassy or at Altamira every night. I do not want to say that the first group is nice, they are just less evil, should we say.

- The opposition keeps its motivation. If on a Sunday you manage to get more than 20,000 to attend a portion of a march, that speaks volumes.  I wrote 10,000 above because I reckon the march was about ten blocks, a thousand people a block. But keep in mind that all do not walk the whole distance as I did, that many are just on the side walks and maybe accompany the march for a couple of blocks. Thus 20,000 total is for me, EXTREMELY conservative attendance number which after a month and a half is, well, exceptionally high still !!!!

- But most important of all, Maduro is going to fail because he cannot build a nation when more than half of it refuses to follow him. This is now an open dictatorship and these people marching with me today all know that and will fight it in any way they can. None will have their mind changed by any speech or any collusion of Maduro with creeps like Dilma Roussef, to name one.
---------------------------
One thing that never fails wherever you go, is the sales person. This one got 200 Bs from me for a cap (I forgot mine in San Felipe) on condition he allowed me to take his picture. 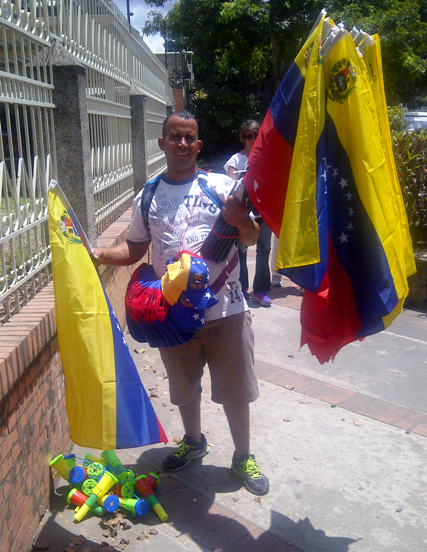