Tourism in Venezuela, uncomfortable and tacky, with the occasional glimpse of past splendors

So, I decided that I had to use my resort week now because I risked not been able to use it later this year.  The S.O. being stable, work crisis being their chronic self, I left for Margarita, alone, for exercise and "me" time. A chronicle of sorts follow.

The first thing is that my plane fare was cheaper than the cab ride between Caracas and its airport. I know, I use a safe taxi system which is somewhat more expensive. But even if I used an airport taxi or teletaxi , it would have been almost the same and when I add the cab fare in Margarita, I do spend 1.6 times in cab fares than air fare. That tells you about the distortions in prices in Venezuela.

Amazingly my flight left on time. So used to delays that may be of 2, 3 or more hours, I had pleasantly sat down half an hour before takeoff to for lunch. But they boarded on time and I had to wrap up half of my lunch to board and finish it inside the plane. Still, for once, I have something positive to say about the national terminal at the airport: food choices were better, stores carried all the papers, opposition included which is not always the case in some airports. Too bad toilets had no water and walking in front of them, well, you knew.

Margarita keeps decaying. Stores are sparsely set. The little bit you find in stores is as expensive as Caracas, with as little choice as in Caracas.  The only booze left to be found with some choices is Scotch which is basic staple for chavistas. Puerto Libre is a fading memory.

One of the pleasures of going to Margarita in the past was to get some foods that could not be found in Caracas. This is long gone. This time around I did bring food with me. That is, knowing that there is no milk in Margarita I brought powdered milk, something to heat up water and my choice of teas. And my morning cereal to have in my room. That is right, in Venezuela you are often better off, if you can, to carry with you the basics to make your own breakfast since you never know what you will find. Lunch and dinner you can manage but breakfast is dicey as there will be a lack of either coffee, milk, arepa, empanada, and often more than one of them at once. 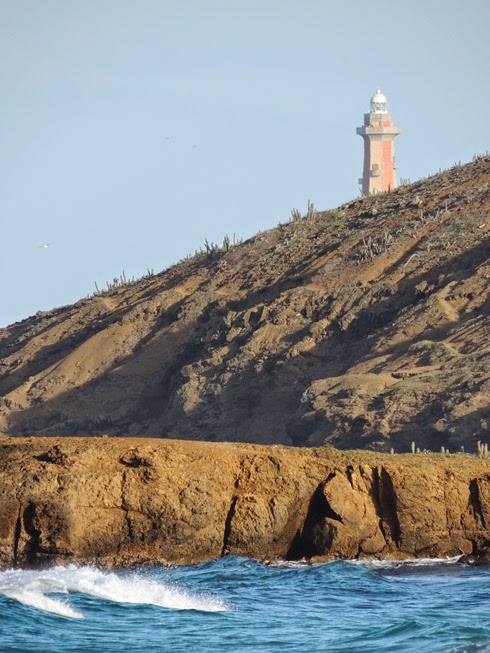 The resort where I have my yearly week keeps decaying. The swimming pool is closed, the family pool is of dubious water quality. So only beach it is. I had a power outage for three hours and regular bounces in current that turn off TV and AC. The hotel smells moldy. The room cleaning staff is, well, not overworked. Internet goes at turtle pace.  Caracas newspapers do not reach the convenience store anymore.

And yes, this is still considered a fine resort in Margarita. See, all are run down because there are no supplies for pool chemicals, the new labor law limits services that can be offered, there are no spare parts for many things, starting with beach chairs, etc…

The tourists have changed. Once upon a time Margarita was a big destination for Europeans. Then they came in lower and lower numbers, being replaced by Trinidad, Barbados, Argentina and the like. Then these ones stopped coming and now tourism is limited mostly to Venezuelans and Colombians. Both of the nouveau riche and not that rich quality, I am afraid to say. Not to be empty, resorts dropped prices, and dropped service along.

One morning around 10 AM I was on the resort cart to take me to the beach. In front of me was sitting a couple. The woman, overly made up for such an early hour on the way to the beach, was lost in texting over one of exceedingly priced smart phones. The man was holding a bottle of Buchanan’s 18 old year scotch. He was filling one of those metal travel mugs which by noise I deducted contained ice only, for the on the rocks feel. Of course, I had to ask how much he paid for it, this being Margarita, last haven for scotch buyers. He paid 3700 Bs (from 587 USD to 74 USD depending on your preferred currency exchange rate). Now, I love my Scotch too but I am a mere soda and Dewar white label lover, switching straight to single malt when the occasion arises. I would never spend 70% of a monthly minimum wage on Scotch, to be drunk at 10 AM in a travel mug, holding the bottle in hand in public, still at breakfast time. Sorry, I am no chusma (brown trash? this being a racially mixed country…)

Sea pollution in Venezuela is getting really bad. There is absolutely no control left and I am sure many a tanker or other boats have no qualms cleaning up in Venezuela waters knowing well that no one cares. The Eastern coast of Margarita is exposed to such contamination and the government does not care about cleaning up. As a result the sand is turning black with tar. I dug with my hand and it was at least ten inches of tar sand before the pink sand appeared… 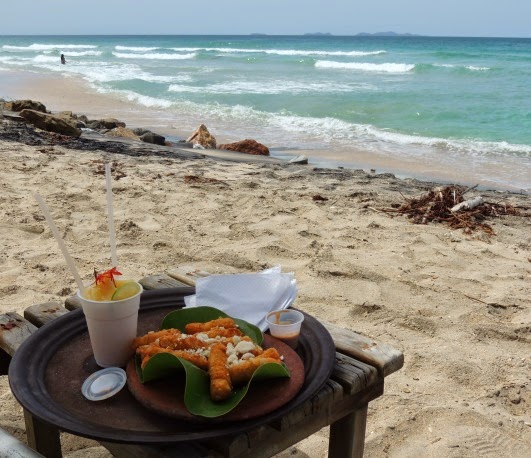 One of the few pleasures left is that you can get at very reasonable prices delicious tequeños brought to your beach chair with a glass of piña colada. For a price that goes from 3 to 7 USD according to your favorite exchange rate. Or patacones if you prefer, large toasted green plantain filled with coleslaw salad.  Nothing says more hedonism in Venezuela than booze in public by the shore with tequeños, those refines cheese filled fried pastries.

Still, there was interesting reading to be had while lazing at the beach. The book is tome 3, I think, of the memories of Tejera Paris, one of those notable public servants that the Venezuelan state used to have until Caldera 1 term, when corrupt officials started to reach top positions. Today they are all corrupt, but that is another story. 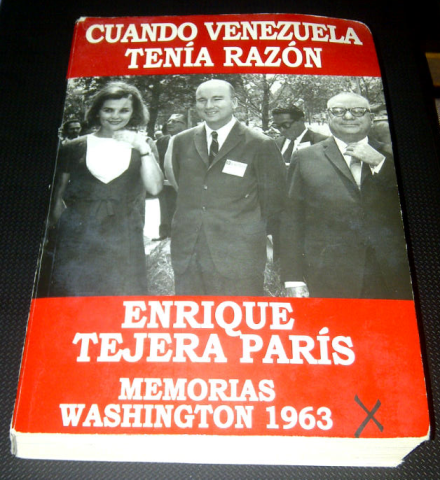 It is worthwhile read these memories if you can have access to them (in Spanish only). Tejera Paris was named to many positions and ambassador to Washington when Kennedy was president.  This volume is mostly about that first year in Washington of the 4 he spent there. If you factor in the occasional self-serving paragraph (aren’t they all self-serving to begin with?) it is a rude reminder to read that in the 60ies Venezuela was actually considered as a serious partner by the US. Today it is a nuisance, like a gnat is.  And reading today fresh anecdotes of Camelot…

Though the book clearly could have used a much better editor (Tejera is quite elderly now and it shows in the time sequence of his anecdotes that amazingly are repeated in the book) I highly recommend it, if anything to remind folks that at least the first two terms of the democracy, 1958-1968, were high waters for Venezuela, before ebbing to the current cesspool.

On the last night there was an impromptu meeting with three of the known 4 readers of this blog in Margarita. There may be more but those are the ones that replied either in time or to the “picture quiz”.

The meeting was very pleasant around drinks. And the conversation so predictable: "what is going to happen?" . Though we had time of a little bit of gentle blog gossip. I thank my company for visiting and next time I will try to do an early warning so maybe we can gather all of us in Margarita.

Return to reality was painful. If the plane left on time from Margarita, Caracas airpost was in chaos.  While I had to wait for almost an hour my bag I had an out of body experience of sorts. There was that French guy speaking over the phone with a Friend. In his 60ies, or a worn out 50ies. The conversation was in French so the guy felt safe to tell his friend about his week vacation in Cuba and the girls he bedded there. All superb, much better than the Venezuelan variety.

This would have been OK to a point were it not for what was his companion, looking for their bags, a much younger Venezuelan woman.

I am surrounded by all types of chusma.


And why not a pic of the patacones to conclude this entry? Not on the same day, I am not a pig! 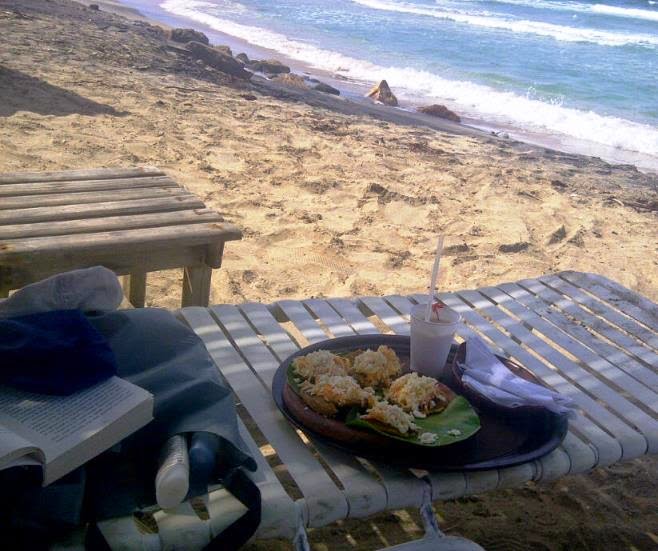