The road from Deadend to Rockbottom passes through Deadbeat & Co. Caracas'offices

Well, my friends, it seems that this time we got what we saw coming. Well, some of us saw it coming long ago but that is a small consolation.  I am going to give you a few of tweets from The Telegraph covering the latest OPEC meeting.


Why? There, in two tweets.


Qatar oil min leaves smiling but saying nothing. Seems Saudi has won a rollover at #OPEC but nothing official.
— Andrew Critchlow (@baldersdale) November 27, 2014


and the real meat


Translation: My "dollar today" app has been updating its "cucuta" currency more often than usual and last time I checked it was 149,73 Bs. for one single US dollar... For memory I was writing last Wednesday a horrifying post where the USD was still at what would be today a balmy 137.... Venezuela has to be the only country in the world where there is a run on its currency and the government does not notice.

Real Translation now: Ramirez left red faced because 1) he finally realized that Venezuela has lost any influence in OPEC, or the world for that matter; 2) probably someone at the meeting told him that the OPEC was not there to solve the mismanagement problems of Venezuela, that if the Middle East producers had been able to create sovereign funds of billion dollars, why did Venezuela not do the same? 3) because Ramirez, of all people, knows where the wasted money went and he knows that at the OPEC meeting they all know he knows; 4) because Ramirez has to go back to Venezuela with the good news that we are bankrupt and that it will take too long  for prices to go back up enough for the regime to survive in its current state; and finally 5) Ramirez knows that when real history books are written his name will go down in infamy as perhaps the single worst offender after Chavez, the one that destroyed willfully Venezuela for ideological reasons, personal resentment and what not. Then again Ramirez may be too far gone to realize, yet, #5.

To conclude fast this post, since I feel more like crying than writing, let's just say that the crows have come home to roost, that we are now all but officially bankrupt, that 2015 will have a truly major economic crisis and that the only hope the regime has to survive is brutal repression, of the kind that leaves hundreds of death. And not necessarily opposition deaths as many of today's chavista will feel hungry soon.

Of course there are solutions to attenuate the damage and avoid the worst; but the regime cannot take them. That will be for another post, once I regain some composure.

PS: from a second article of Critchlow we get the following, say, money quotes:


But in too many cases throughout Opec’s turbulent history this vast oil wealth and control of the world’s primary fossil fuel energy source has been abused, simply to support regimes with, at best, questionable political legitimacy and, at worst, the brutal juntas of despots such as Colonel Muammer Gaddafi, Saddam Hussein and Hugo Chavez. 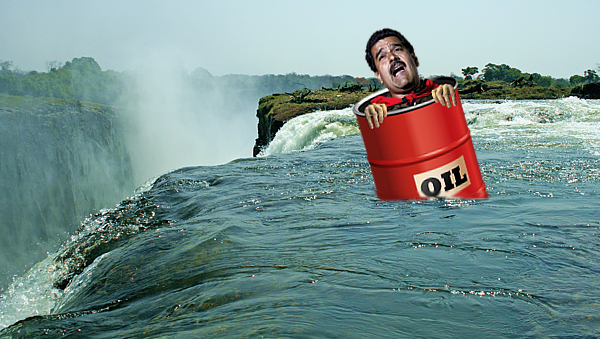