Another day, another constitutional violation (UPDATED)

It cannot be any clearer (my emphasis)


Article 279 of the constitution states clearly that the three holders of "citizen power" are to be named by a 2/3 vote of the national assembly after a lengthy process of selection. If the assembly cannot reach a 2/3 agreement, a list of three candidates will be submitted to popular election to fill the 7 year terms.

Using as an excuse an obscure ruling, unconstitutional of course, of the high court the National Assembly today elected by a simple majority the three holders for the next 7 years. 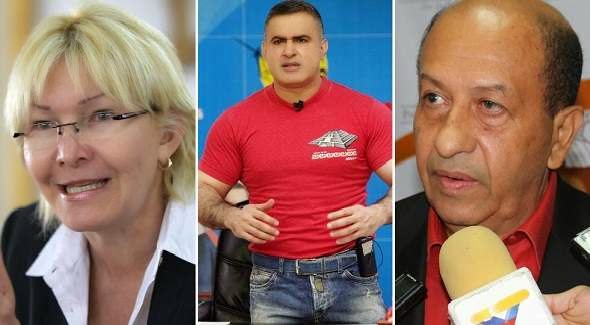 Infamous Luisa Ortega, the nazi-like prosecutor of the regime, a woman so degraded, was of course renewed in her tenure. At this point she might as well hold to it: sort of shooting her victims herself, how much lower can she really go?

For ombudsman or "people defender" a total Chavez apparatchik was named with Tarek Saab. In this most delicate position that requires equilibrium and an absolute lack of partisanship the regime has put someone who used to be close to Chavez but was pushed aside the inner circle by putting him as governor of Anzoategui. After leaving the state he was in sort of an oblivion until his resurrection this week, all steroided up.  The funny thing here is that before Chavez he used to be known as a human rights defender, but once Chavez made it to Miraflores Tarek became a promoter for the theory that human rights only existed for chavistas.

As for the third one, the "republic's comptroller" a quiet discreet figure was appointed to make sure that the boat of corruption shall not be rocked. Manuel Galindo, close to the current power structure, knows very well where the corruption is, so we can be sure he will know how to hold his agents and how to unleash them when the regime needs a purge or something.

There is of course no surprise in the whole thing though even at this late in the game we still manage a little bit of amazement at the brashness of the whole thing.  But there is a simple explanation for yet another constitutional violation (and more to come in the next days for the high court and electoral board appointments). The regime can read polls and knows that even naked electoral fraud may not save it from a new National Assembly next year, controlled by the opposition. Never mind that the economic crisis will get worse by the day.

Thus the regime is preparing itself in any way it can to hold to levers that will attenuate as much as possible a putative opposition victory. A national Assembly voided of significant power in a system where all the controls of the state operate to further annul its action is an option for the regime that it cannot pass on.

NOTE: I assume that there will be elections that will be held in conditions that will allow for an opposition victory. But of course, the regime can find lots of excuses to postpone or void elections, for example through food riots sponsored by the regime itself.

At any rate, if any one thought remotely that there was the possibility of dialogue in the country, today they were set right. Now, what is the opposition going to do? Nothing, that is  my bet.

UPDATE: Bruni gives a perfect explanation, in Spanish, of the high court ruling that allowed for the constitutional violation.