Gay marriage, at long last (but not here)

Yes dear readers, I did cry a little when I saw that picture. I do not know why, but it had that quality. 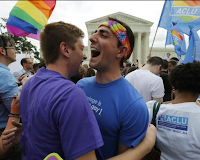 Today finally the United States Supreme Court bowed to what was unavoidable, to what civilized countries in the world had been granting one by one over the last two decades. Any two not directly related adults in a stable union should all have the same rights.

It is THAT simple.


I suppose that since I lived many years in the US and since I did participated into many of the gay rights fights when I was over there I am particularly sensitive to that moment today, even more to the one when France granted marriage two years ago. But this blog has never been about my personal life and this one has only surfaced on occasion, when appropriate or relevant to the moment. Today it is such a moment.

In Venezuela, the Bolivarian revolution which was supposed to be a liberating one has turned out to be a repressive system. And gay rights have not escaped. The more so that the uncouth military nature of the regime has exacerbated that posture. Homophobic comments have come from Chavez already though he refrained from the worse letting his underlings who had no qualms for that. Maduro/Cabello have been the worse.

Not only gay rights are not recognized but unions even less. To the point that the regime has asked embassies from countries that do recognize such unions to refrain from holding such unions inside Venezuela. Thus the French embassy could not marry me even though my S.O, and I have been together for now 16 years. They could only give us a PACS, a civil union in French law. Which is, by the way, causing me grief as I do not have some of the benefits that I could expect if married now that we have to deal with the painful disease of my life partner.

In Venezuela this has dire consequences for us as I am legally NOTHING for him and I only rely on the good will of people we deal with. His doctors are fortunately educated in the ways of the world but if we were to have a sudden emergency with new personnel, well, I might be barred from participating and his relatives would have to step up to let me in.  As for legal procedures, of course I am a nobody. Fortunately I have a good relationship with his family but I fear for those in my case who do not have the luck to be in speaking terms with the other's family.

So, if you ever cross path with the dwindling crowd of assholes that still defend the regime and the Bolivarian farce I suggest you forward a link to this post and demand them to explain why this revolutionary farce is so far behind in real Human Rights.

PS: the Venezuelan opposition does not fare much better, by the way. The only group that has an active pro gay rights platform is Voluntad Popular, the Leopoldo Lopez party. Just so you know.