Argentina and Uruguay to investigate business with Venezuela

They say all roads take you to Rome. Well, here in Latin America, all roads lead you to Chavez.

When Mauricio Macri was elected, Argentineans started to find out some of the comings and goings of the Kirchner government. For example, take this poultry farm called Red Crest (Cresta Roja), which just went bankrupt and fired 300 workers. It exported to Venezuela and received a 650 dollar subsidy for each ton exported. Also, they were paid by the government for selling their produce underpriced to the local market. And gave them billionaire credits which they can´t pay back to the Bicentenary Bank, due to the fact that Venezuela is not paying its debts. So, in spite of all these benefits, it went broke. Money loaned went to pay for the K political campaign, not to cover up for Venezuelan lack of payment. They did not count on losing the election.

This is just one example. There are many others. And the new Government has vowed to look into them, including Antonini Wilson´s dollar-packed suitcase.

On the other side of the River Plate, a Parliamentary Investigation in Uruguay dealing with the state-owned petrol monopoly – ANCAP, has also lighted red lights in the opposition, as well as public opinion. The company has a deficit of more than one billion dollars and most of them are directly or indirectly connected to business with Venezuela. That´s a lot of money for a small country like Uruguay, with a 3 million population.

In the meantime, the opposition has also found out that the main spokesperson with Venezuela is Daniel Placeres, newly elected to the House of Representatives by the Popular Participation Movement (MPP, for its initials in Spanish), Mujica´s party. Not only that, he actually lives in Mujica´s ranch. During the past three years, Placeres admits visiting Caracas for 85 times. Of course he denies influence peddling, but that is hard to believe. He´s just a cover-up for Mujica himself. A percentage of all trade between Uruguay and Venezuela goes to the MPP chests. During these trips he was received personally by Maduro at his Miraflores offices. This is not a normal procedure for ordinary businessmen doing trade.  So you’ll be hearing about Aire Fresco S.A. (Fresh Air) in the nearby future. That’s the name of the trade company that was created for business with Venezuela.

The National opposition party is in an “investigative vigil”. Relationship with Venezuela has been a constant worry for the Party, both politically and commercially. After this summer truce, one expects next year to be complicated. Circumstances avail that.

This audio in Spanish explains some of the matters that are being considered. An article in the Panam Post in English will give you a further insight into this problem.

Just before the Parliamentary elections in Venezuela, General Padrino came To Montevideo for an official Mercosur meeting of Defense ministers. He took a day off to spend some hours with Mujica at his now famous ranch.

Since the meaning of “padrino” in Spanish is Godfather, I associate that figure as Pepe Mujica´s role in Bolivarian world. One presumes that their talk was to build post-electoral strategies, since the tweet that came up from that meeting is till echoing: 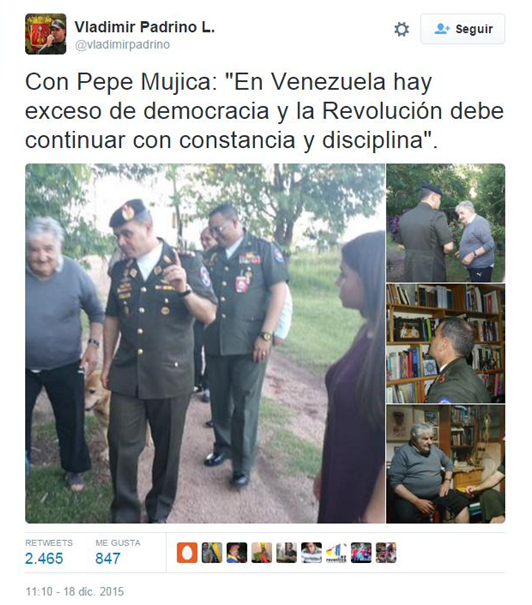 Meaning: “In Venezuela there´s an excess of democracy and the Revolution must go on with perseverance and discipline”.

Such hypocrisy and double standards! We all know these characters cannot afford to open the Pandora´s box that would disclose their corruption. It would be the fall of the Berlin wall all over again.