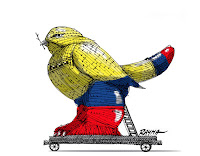 Second, the shock of the NYT and many other pundits lulled into quite a lot of confidence of a SI result in a country notoriously wrong in its polling folks. Does anyone remember how Antanas Mockus was a shoo in against Santos 6 years ago? But even if we assume that polls are better in Colombia than what some past mistakes may want you to think, the "shock" reflects also an inexcusable ignorance about what moves people in Colombia. Here in Venezuela the regime was careful not to embark in excess optimism, for once. The opposition, if anything, was shocked that the SI rode high in the polls. We all knew better. The cartoon on the side tells you what we thought of the Trojan dove.

So we come to the explanation of what happened.  I had decided not to write about the whole peace process much because, well, I have other priorities these days. But inspiration came tonight. Let's first go into the errors of Santos,

We can start with hubris, thinking that because he defeated the FARC as Uribe defense minister he was the hawk that could make peace credible. He got so enamored of this role that when things started becoming difficult he was unable to backtrack and forged ahead until today's crash.

Then came the choice of Havana and Castro's guidance to negotiate with its allies, the communist FARC. If at first there could be a case written for it, if anything to guarantee the discretion that the Cuban jail brought, it soon became clear that Santos was negotiating on the FARC turf, on the FARC mood swings, etc. But it got worse. As Venezuela started to unravel fast, that this one was a guarantee of the process became a minus. Colombians simply could not help but think as to whether an agreement with the FARC, made in Havana under the eyes of Venezuela's colonial masters, had a Venezuelan like future in store.

And there was Santos reelection problem. For many reasons having been elected the first time by right wing votes he got his narrow reelection courtesy of  weak left wing votes. That gave back some strength to a left that most thought Colombians had outgrown in its ideologies and appeal. Many did not appreciate.

I suppose that a mix of all that, plus an economy not performing too well in recent years pushed Santos to make concessions he should not have done. But the man wants a Nobel and a blessing by Pope Francis, so a special judicial court, and special political rights, and no jail terms were a low price for the "surrendering" FARC. In fact, I understand that some thought that the FARC got it easier than what the paramilitaries got in the much criticized deal of Uribe.

I for one always thought that the NO would prevail. I was surprised to hear that polls gave a significant lead to the SI,  but "Mockus" I thought! Then again I found it fishy that one week before the vote Santos had in Cartagena a massive signature ceremony with all dressed in white and coming from all around the world, including the UN secretary. Before the vote?

My surprise, if you ask me, is that the SI went as high as it went. But I understand that the campaign conditions were grossly unfavorable for the NO side . I suppose that rubbing often with FARC and Chavistas has taught Santos a few lessons on how to "win" elections.........

I am not going to speculate on what happens to Colombia next. Already all parts have announced that in spite of all the electoral threats and lies, they are all going to work together, now, to improve the current agreement. Which at least leaves me the satisfaction of shutting down fast a lot of creeps saying that Colombians are warmongering idiots.

What is interesting for this blog readership is the effect on Venezuela.

First, Santos has been way too kind on Maduro even if he obviously dislikes the regime. But he needed Venezuela support to secure the deal, understanding full well that a chavista Venezuela would be a haven for renegade FARCs wishing for a return to action at some future time. Never mind the drug traffic now using Venezuela as its main base.  This is no more. Now that penalties, even if not severe, will be applied to FARC leadership crimes, a secure base is less crucial for Santos or the FARC (if a deal is eventually reached, of course). Thus I suspect that Santos, in front of a totally unpalatable Maduro, will be more strict with Venezuela's abuse, and when done on Colombians in particular. In addition, being tougher on Venezuela (which is, face it, an increasingly irrelevant country) will bring him dividends while negotiating with Uribe folks the rewriting of the peace agreement.

For Venezuela itself we are getting rather bad news, The safe havens inside Venezuela are now well set and if anything Castro and the FARC are after today going to insist further on their safety and intervention in Venezuelan affairs. Maybe a little too much for the military taste. Maybe a little bit too much to make the necessary changes to avoid general starvation. Maybe a little bit too much for foreign countries who were made a mockery of in Cartagena a few days ago and now may want to make sure it does not happen again, in Cartagena or Caracas.