50 days of street protest, and then this


Saturday 20 it was the 50th day protests started. And far from people getting tired, or scared because of increased repression, the opposition did a massive show of force that overwhelms any attempt the regime could do to counter.  The street now belongs to the opposition, the world saw that yesterday, unless you report for Telesur or some paid for propaganda channel.

Someone managed to fly briefly a drone, something forbidden by the regime on opposition marching days so that no documentation can be done on the extent of the rally, or the repression. But I suppose that if you limit your drone to go up, take a shot, and go down fast you can escape any tracing of your device. Whatever they did, this is the biggest on record pic of any march/rally ever held in Venezuela. If there is a bigger one from the regime surely the pic would have been released long ago.

But before I comment on what the political situation has become, let me tell you what my experience of the day was.

I did not take any chances, tired of many things and a burning sun. I walked for about three hours and only went around what could be qualified as the speaker's corner, all around the Los Ruices exchange. It was enough to document it in awe. You can already see the panorama from the bridge above, with the end lost in the far horizon.

The first video from my small Samsung on arrival. The rest are on my J7. Sorry, cannot afford iphones. All pics videos mine except for the drone thing, of course.

But if the expanse and depth of the rally were impressive, the density also was impressive. 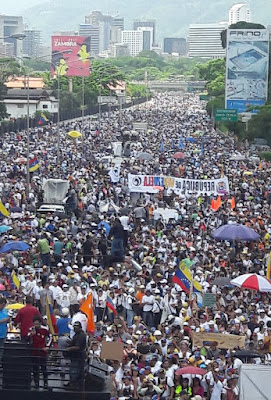 There were other sights. One was a stand selling the old pre Chavez flag, 7 stars, horse going on the right, and the Chavez flag of 8 stars and commie horse. You draw your conclusion as to the intent of the sales persons.... 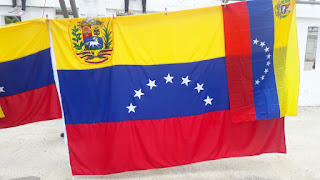 Then there is a panoramic video of the speakers corner. And a still, might as well. Note that further down there are sound relays so that you can hear the speeches several hundred yards deep. 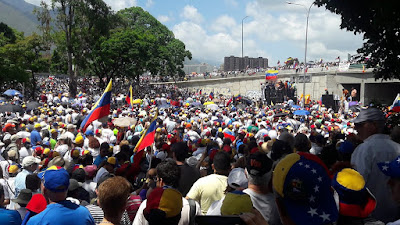 Which called for all sorts of crowd gestures like this show of hands. 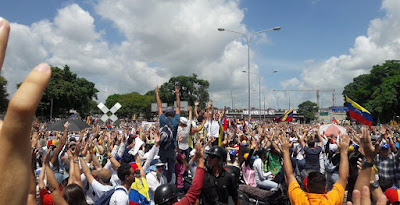 Behind, on the other side of the bridge there were people but lesss. However there were barricades so that the nazional guard could not take us by surprise, giving us time to escape. 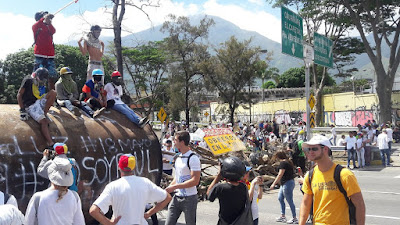 There you have it, warriors and all, leaving you with the question on how did they find and carry that old rusty tank.