Of course, I did not go out to vote. So I was trying to figure out whom to go with to the scheduled rally late morning to take the main Caracas highway. This was not going to happen. Already around 9 PM I was hearing loud explosions from Caurimare through where I was supposed to pass to reach the highway. Eventually the rally was cancelled due to the intense repression of the regime that would not even let embryos of rallies take place.


What to do? I took my camera instead of my cel for pictures since after all the odds of being shot by a nazional guard were higher than of being mugged out of my fancy camera in an area full of barricades where thieves simply could not go in daylight. I suppose there are advantages to be on strike with road blocks.  So here is my walk to Caurimare where I barely avoided massive gassing by tear gas.  And learned never to go alone again to a protest march and never to go without at least a mask and a tiny bottle of a bicarbonate solution. 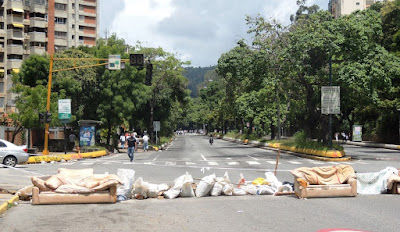 The walk was pleasant enough on the way. After all the day was rather cool. I met first the neighborhood monument to the fallen, which had an empty bottle of beer in front. Venezuela….
Then I saw the cars ready to evacuate the injured, sporting one of the white flags with crosses from diverse colors depending on the use, I understand (officially the red cross is not involved in local fights). 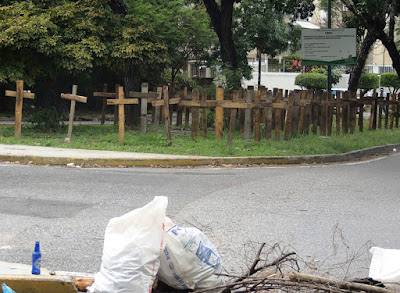 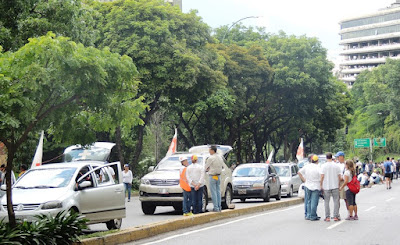 What was stunning was that the barricades at Caurimare are next to a major health center, Clinica Metropolitana, that the regime has no qualms in gassing abundantly as needed.  Though now that I think of it, after this Sunday maybe I should change the word “regime” for another one. Tyranny? Dictatorship? Gulag-in-waiting? The people did manage to bypass the parking entrance of the clinic and went to the decks to take the view from above.  I am sure that at some point they would be targeted…. 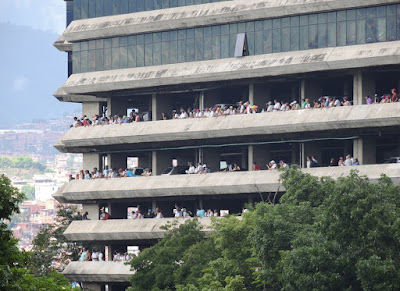 I decided to be adventuresome and try to get as close as possible from the front line. After all some of the barricades were solid enough that one would have time to retreat because the bikes of the regime would need to stop to take it down before pursuing you.  Thus I can post views of the crowd and the nazional guard in the distance. 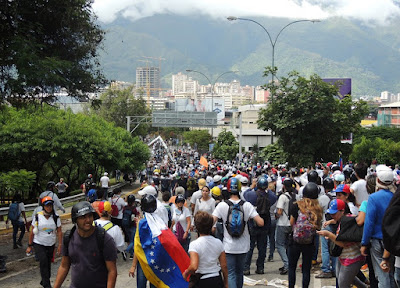 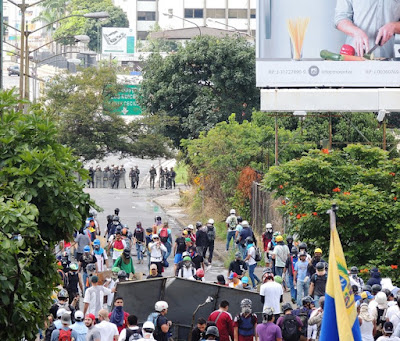 By the way, this was the view from below of THE barricade protecting those not that adventurous.  After taking that picture I realized that most people ahead of me where way younger, way better equipped than me. So I thought that maybe it was time to go back. 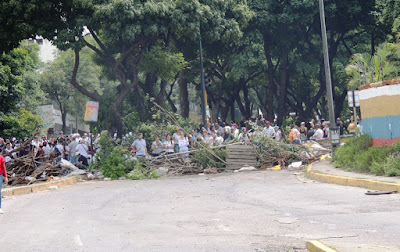 On the way uphill I stopped to talk with some folks. And that was when we heard the balcony of the clinic erupt in screams of warning. The guard had started its move. So I tried to run up the hill but well, I am not in good shape. Looking back I could see the clouds of smoke coming and detonations which, this close, are rather scary. The more so if you are alone and without a mask.  So no time in trying to take a picture, sorry, I had to reach uphill without spitting my lungs. I managed and I felt safer. The folks had started fighting back with Molotov cocktails, and gas bombing had momentarily stopped. While I was catching my breath the fumes made it to me even if diluted enough not to be visible. I started spitting my lungs and decided to head back home. Enough for one day, I am too old for more than that. Or at least need to equip myself better as most people seem to do now.

---------------------------------------
On my Timeline in Tweeter I narrated a summary of my S.O. own experience. He was forced to go and vote. I actually encouraged him because as a public employee with an incurable illness he cannot afford to lose his job and health insurance. There is neither Obamacare here nor civil rights protection and there are only so much health expenses we can afford. He sent me a long letter in Spanish that I may post below later when I have Internet at home, here I am at a neighbor’s sufferance.

The summary of his experience was that his normally crowded center, a big one downtown Caracas, was empty. There were not even the normal number of attendants. There was no control except a quick glance to you ID card just before the vote. There was even political propaganda distributed INSIDE the voting area, a major rule violation in electoral law. But nobody cared, nobody monitored. He sent me a scan of some of the propaganda pro regime he received. 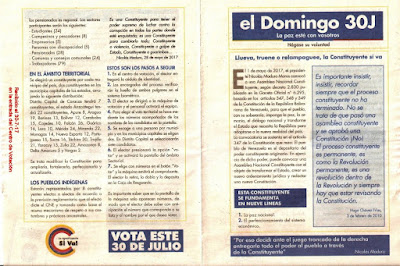 In other words at noon we both knew first hand of the regime intense fraud, him from voting and me already from the noises of repression that I would soon encounter.


PS: I heard detonations all the rest of the afternoon after returning home.  As late as 11 PM I could still hear an occasional explosion.
Posted by Daniel at 2:18 AM