Primaries: where the trends are

My favorite Pollster, Keller, has his March study out.  Note: he is my favorite which does not mean he is the Bible of Venezuela polling, but he has the merit to have the best trends in the business even though his actual prediction record is not the best, though not bad.  Not to mention that he does not promote himself like, say, LVL....  Second note: I am passing on all the voting patterns, etc, because,one, it is too early to bother with that and two, Chavez had a major populist onslaught through April and today's result could be significantly different, though certainly not reversed, yet.  I have thus kept three slides that drew my attention: two on the understanding of the country misrule by the people, and one about voter preference for a primary candidate within the opposition electorate, the one that really matters for a primary.


Lies that do not fly

The first two slides I want to draw your attention to are important because they reflect clearly that in spite of the huge propaganda machinery of the regime some of its "truths" simply are not being bought anymore (though some others seem to be bought quite easily yet, as seen through the long lines this week end of people hoping to get housing now, and for peanuts).

The first slide gives you number of people who think that  current inflation is due to the late December devaluation from 2.6 to 4.3.  49% think it has a lot to do, and 24 % think it has something to do (73% total).  The 22% in the right column are those who get all their news from La Hojilla and Alo Presidente.


The result is without appeal: people do associate current inflation with the devaluation. We would have liked to see a question about linking inflation to the bad policies of the regime but such a number gives us hope that a majority are aware of that tie.  Thus the political line of "a currency adjustment" did not fly, all know it was nothing but a brutal devaluation.

The next slide gives you a division of sorts between real opposition, knee jerk chavismo and the diffuse NiNi world in between.  People were asked why is it that we have so many problems?  From people protesting everywhere, to rotten food and what not.  I am sure that the answer must have surprised more than one since the big winner with 36% is the government incompetence.  I suppose that in a way people are sophisticated enough because this is not even the fault of undigested socialism (24% think so, that it cannot work).  People pinpoint clearly the root of the problem: chavismo is mismanaged by crassly incompetent people (a question on corruption associated to this one would have been welcome)


The third option is there for a laugh: 26% think that all the problems come from opposition sabotage, reflecting like above the 20+ % of the population who belong to the chavista cult, watching mass Sundays at Alo Presidente and doing prayer circles nightly with La Hojilla.  In spite of all efforts the "es que no lo dejan trabajar" is not cutting it, besides giving hope to the core base of chavismo, the lone objective it could ever fulfill anyway.  60% of the population in Venezuela simply do not make excuses for the regime anymore, it is not a matter of sabotage, of not letting Chavez work, it is a matter of erroneous concepts applied by incompetent people.

Just with these two slides the MUD has its basis to build its electoral program!

Primary first reading
This slide is really more for entertainment value than any ground breaking information.  In it, in an obvious multiple choice question, Keller asked the opposition electorate who they like better among the rumored or official candidates.  As such this is strictly a beauty contest about who looks hot and sexy at the starting blocks. 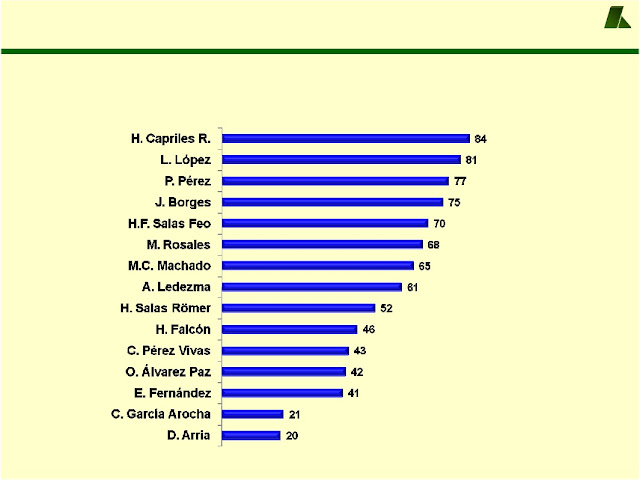 For those of you savvy enough, you know that 10 months in politics is a life time and deflation of a given name can be mercilessly fast....

The first thing to say is that I need to pat myself in the back because it is a confirmation of my first evaluations on this matter.  Namely that there were really only two groups that were clearly above the 20% of solid vote: the COPEI heirs (Capriles, Lopez, Borges, etc...) and the AD heirs (Ledezma, Perez, Rosales etc...).

I wrote then: [update and comments in brackets as needed]


Capriles is ahead, and will remain so for as long as no other group comes up with its candidate. But right now he would not get much more than 30%. [He is apparently getting high now but do not forget that he is hunting the same grounds as Salas Feo, Lopez, MCM, etc...  So it is fair to divide in half, at the very least, his whopping 80+%]

The only serious potential rival to Capriles will be the "social democrat". If Perez gets the nod, he could even win as right now, just with Zulia, Perez would get a 20%. [What this beauty contest reflects is that the social democratic option trails the, let's call it by default, formerly called christian democratic option.  Lots of people hunting there too, including the democratic left, so it is fair to divide by 2 and more these preferences, or rather, leave them at 10% behind Capriles and Co&., as I did in April]

In third but really with no chance, would be Falcon if the democratic left were to unite. With Lara, Aragua and disgruntled chavistas he could well reach a 15% right now.  [applying the same logic as before we see the Falcon camp 10 points behind the social democratic camp, though let's not forget that for the time being Falcon does not seem to want to run, preferring perhaps to let this doomed third option to Ismael Garcia, while he builds for more favorable times.  thus that third position is really up for grabs right now]

The rest right now have no chance. The only two which I see becoming a remote possibility are:

1)Leopoldo Lopez if he can run since right now he would get a healthy 15%. [He is the most "likeable", explaining the discrepancy I see in this case.  Not to mention that he is not allowed to run, yet]

.....  [The "independents" actually look a little bit stronger than what I had expected them to be, but still quite far behind even for a beauty contest].

Again, the campaign is long and history books are littered with front runners that died politically before election day. But that is not the point of this post: the idea was to let you know why by December 2011 there will be at most 5 candidates still running and why by February 12 2012 that number might have gone down to 2 or 3 at most. [Based on this beauty contest, it seems that the game is going to be between the social democrat and the christian democrat with maybe a third tier spoiler, unless of course Lopez is allowed to run, and for long enough to tip the scales.  Note, Lopez hunts on the grounds of both front runners]

So yes, I am happy, I am on track :)  BUT AGAIN: this is just starting and there is no way to have a more reliable prediction for at least 3 more months.  Right now only a trend is being set but that trend could change dramatically if Lopez is allowed to run, and not necessarily in his favor as it could quickly become an all against Lopez.
Posted by Daniel at 5:36 PM