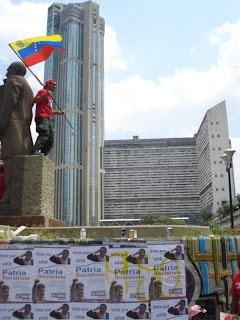 The official campaign may have ended Thursday night but the regime has been blithely breaking the law and keeps campaigning all the way until today, on the excuse of commemorating the April 2002 coup. The electoral umpire? The CNE sees nothing wrong....  Which forced Capriles to go a press conference tonight that sounded almost campaign like. It will be interesting to see if the CNE dares to criticize Capriles  or if the electoral "acompañantes" (cf. Carter Center) will have anything to say about this.  I am not holding my breath.

The last week of campaign has not offered any surprise. Capriles has kept motivating his base, offering us the biggest rally ever in Caracas political history.  Apparently all in the foreign press did not seem to catch on that, but then again the recent reported problems in the Capriles media system can be blamed in part for that.

Still, the momentum is clearly in the Capriles camp, chavismo unable to find the adequate one liner, unable to offer a political rally without loading bus after bus of public workers forced to attend.  My S.O. had to go last Thursday to Maduro closing march and rally and I am putting a few of his pictures through this entry for decor. You can interpret them, according to your pre electoral mood, as the last days of chavismo or the dawn of the official Cuban era in Venezuela.

Last minute polls of doubtful origin or accuracy coincide at least all in that the gap of two months ago between Maduro and Capriles has been narrowing. Will it be enough for Capriles to win? reply in less than 24 hours.  Which bring us to the need to write a brief overall summary of the whole campaign.

The campaign has had two phases: the first one from mid December until Chavez official date of death in March, and the second phase until today.

During the first phase of the campaign, the opposition could do little since officially Chavez was still supposedly alive and recovering. During that time the regime used all its possible tricks to promote the heir apparent, Nicolas Maduro.  The regime even went as far as promoting a constitutional coup on January 9 so that Maduro could be proclaimed officially in charge once Chavez did not show up for his swearing in. For the regime it was akin at cursing itself as all went down hill, revealing that Maduro was unfit to be president. Among some of his major blunders was to call for a double devaluation of the currency when he could have waited until at least April 15.  All of this while food shortages were becoming a recurrent hardship and inflation went up.  Never mind that scenes such as native american repression took place, scenes that I am sure Chavez would have never allowed or at least would have managed better. 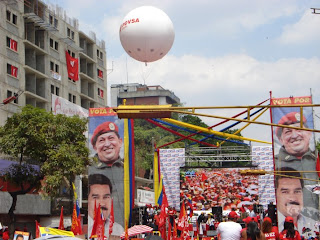 Then Chavez death was announced and we went immediately into the active campaign phase, started right there, next to Chavez coffin. The regime sensing that the situation was not all that favorable for its intention of perpetuation, decided to gamble it all on Chavez decision to name Maduro, on Chavez memory, on the need to honor Chavez, to be loyal to him.  Chavez has been everywhere in the campaign themes of chavismo, sometimes even alone in the poster, with Maduro's name appearing just as an afterthought....  Chavismo may have overreached in this.

The surprise came from elsewhere: Capriles. After appearing to hesitate, for effect, he threw his hat in but announced a very different type of campaign. His gamble was simple: facing a flash election without money to spend and in front of a regime that had been stockpiling ammunition since last December he decided that he had expressed the reasons to vote for him last year and that this time around he should go on the offensive, attacking Maduro, a candidate that is weak but that counts on all the resources of the state at his disposal. Thus Capriles faced this most undemocratic election of our recent history with the resolve to expose the fraud that Maduro was, supported by a regime turning fascist quick. And the Capriles version 2013 has paid off. His numbers went up in the polls, Maduro was forced into making errors after mistakes and tomorrow Capriles who had no chance in hell in January could pull off tomorrow one of the biggest comebacks in political history, not only of Venezuela political history.

Is Capriles victory possible? Yes, it is, but I am not predicting it, the deck is too heavily slanted in favor of the regime which has committed so many abuses, starting with an electoral board openly favorable to Maduro to levels that even our jaded selves were not expecting. There is a serious risk that tomorrow Capriles may be forced not to recognize the results as the CNE simply opened itself up to tremendous charges before the first polling station opens.

I have simplified in the two tables below months of numbers gazing. I have divided again the country by regions because the abstention will be more regional than national. For example I expect Maduro not to recover all the Llanos vote chavismo lost in December because Chavez was a Llanero and Maduro, well, nobody knows really what he is.

Below, a regional summary of how the votes evolved from October 2012 to December 2012, in K.  Since Caracas/Libertador did not vote in December I assumed, for the sake of the argument, that it would have voted exactly as it did in October, hence the green color. In red, the amount of actual votes lost in between elections  Note: I simplified, did not include embassies vote, etc, so numbers may not reflect exactly what the CNE said, but differences would be minuscule and do not change my point.

In this next table I try to figure out which is the possible best scenario for Capriles avoiding all the hoopla heard in recent days. My basis are simple: Capriles manages to reinvigorate his base and recovers almost his October 2012 number. Maduro fails to recover the Chavez number of October and in fact barely recovers some of the votes lost by chavismo last December. All very conservative of course. 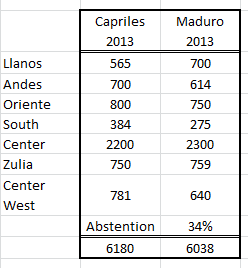 The opposition suffers some penalties because it lost at least two major states in December, Zulia and Carabobo. So I assume that Capriles may have energized its base but the lack of local logistics weakens him some. Also for simplification I assume that chavistas having voted for years for Chavez are not going to go straight to Capriles and instead will sit it out.

Llanos: Capriles recovers more than what Maduro does, but Maduro wins comfortably in Chavez bastion states.

Andes: Capriles recovers more also but not as much considering that Tachira was lost. Then again the new governors have been dismal enough so far that Maduro is really not benefiting.

Oriente: the loss of Nueva Esparta is overcome and Capriles should win there as in the Andes. Maduro has not been campaigning that hard there and the pictures of people he had to carry with the ferry to his Margarita rally have circulated around.

South: another Capriles win as the fraud in the governor election of Bolivar should exact its toll in that state.

Center and Caracas: a narrow win for Maduro because mostly of the loss of Carabobo for the opposition   But it is also the area where it is more likely that some chavistas will cross over to Capriles as more electorally sophisticated than the rest of the country; that is, I have in mind blackmailed public employees that decide to avenge themselves.... The surprise, if any, will come from these states and Caracas.

Zulia: a razor thin victory for Maduro, the defeat of Pablo Perez has consequences.

Center West: Lara governor, Henri Falcon, as a manager of Capriles campaign is coming from his personal success trashing Reyes Reyes in December and can very likely offer a nice present to Capriles.

The end result of my last and hurried visit to the numbers is that the race is too close to call, the 150.000 votes advantage for Capriles can be easily powdered off by the CNE (it did something like that in 2007 as the final results have never been published).  The advantage of the regime machinery is simply too big, too many people depending on its benefits, too many people blackmailed, too many people idiotically into Chavez cult. So I am sorry to stick to my projection of Maduro winning though now it will be by a narrow margin, no more than 52 to 48, which will give him a very debilitated seat, a position that will be immediately challenged inside chavismo. In short, Maduro will not be able to rule as Chavez did and he will have to chose from the start between repression and compromise. Bad choices from his part and the civil war will start from chavismo division, not from a revolt of the opposition which is these days out of resources whatsoever.

There is certainly a last minute possibility for a Capriles surprise  But the only encouraging result would be him winning by at least 53 to 47. That is the minimum advantage that Capriles needs if he wants to pry away a sector of chavismo so as to be able to rule and start recovering the country. Anything less than 53% and chavismo may be tempted to use the CNE for an open fraud, or let him take office to overthrow him within months, as soon as he is forced to take painful corrective measures. Measures by the way, such as gas hikes, that Maduro will be forced to take also. The irony.....

That is the shortest possible summary for the flash campaign and its possible outcomes. We could bemoan that the campaign was a new low, that no issues were ever seriously discussed, that Maduro avoided any debate,  any questioning. But the reality is that this is the case for all short snap elections which are always called on one single issue: recover a parliamentary majority over a program or set a new president. Searching for substance in snap elections is a waste of time because those elections are always run on raw emotion, sheer adrenaline; and this one certainly has fitted the bill. The discussion will start Monday 15, if it does. 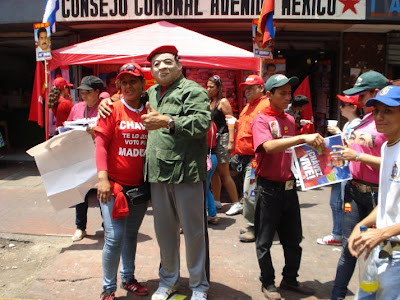