Public service announcement: get ready to starve in Venezuela

This is a public service announcement for readers living in Venezuela: you may be running out of food within a month. I know that because I have heard through my clients and business partners that the regime has been holding reunions frantically to try to negotiate, at least with the food sectors, a minimum package so some basic stuff is produced while the regime comes up with some new cockamamie plan. The common feeling from those I spoke to is that the regime has little idea of what to do. The regime spokescreeps, in a wonderful case of military self sufficiency, went as far as suggesting casually that we should negotiate (blackmail?) with our providers to accept a cut in our debt... and have them keep sending us stuff anyway (sigh!)


The news this morning are not good. We start with the business organization, FEDECAMARAS, telling us that the situation is not a matter of laughing.  This because the new head of the SUNDDE is a certain Andreina Tarazon, a militant hacks of the PSUV that came to there to fame in 2007 during a certain arranged "debate" at the Nazional Assembly. In short, this woman has absolutely no experience in what it is to determine what production and sale prices should be for business. I mean, she has never held a job in her life except those political ones such as proposing that all women should breast feed for months and months, as if it were possible in Caracas to hold a job and go home twice a day to breast feed... As far as I know she is not a mother. (1)

It is to be noted that Tarazon said the following in an interview:


"They make us laugh and they deserve mockery, one should not even pay attention; it is like a thief, a rapist, a conman asking the annulment of the Penal Code, those are awful crimes that affect the stability of the country"

This came because FEDECAMARAS decided to exert its right to demand a revision of the constitutional character of the the law decree that created SUNDDE. Thus, the words of Tarazona, in her supine ignorance, must be interpreted that she is in that job to shut down the private sector.  I must make a note here: the regime is trapped in a judicial contradiction. On one side there is a pervasive system of price controls with some prices blocked now for a year or more in spite of an acknowledged official inflation reaching 60%.  On the other the new SUNDDE law claims that costs of EVERYTHING will be reviewed and people will be allowed to earn as much as 30% (the final rate to be defined at regime discretion). So what is going on here? Do we lift price control and apply SUNDDE or do we keep price control and apply SUNDDE (and its horrendous sanctions) only after they have reviewed prices?

But a wit could say that this is not too bad as long as stuff keeps hitting store shelves. But they are not.  And from El Universal we cannot be optimist. For example, now importers will have to sign an obligation, and pay "in advance", as a bail bond, whatever they plan to import, never mind that the regime may decide not to pay, or return the money months later after a hefty devaluation cum inflation damage. In short, the regime also implies there that the private sector is a whole bunch of criminals. You can imagine that all of this will only have for effect a further slowing down of the economy and production... Meanwhile contraband with Colombia flourishes uncontrolled and fueled by the disparity in currency exchange.... So even less food for Maracaibo and the Andes regions.

Anyway, to let you know that the proverbial s..t is hitting the fan already I have some pictures from last week end. The first one is a line to enter my local grocery store in Caracas. The first time in 40 years my family has lived there that we had to stand in line to enter our local grocer. Never mind that people in line were, well, not locals, coming on motorbikes from all around. Mercal, Bicentenario, PDVAL anyone? 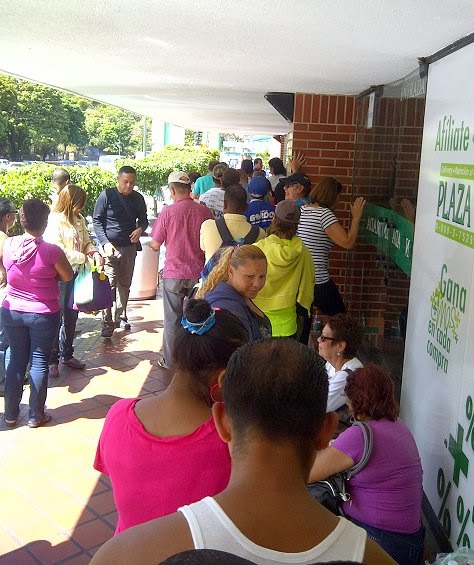 The next two pictrues are 1) the cheese department which, I should nto complain I suppose, has still two varieties, down from the dozen or so it used to have and 2) the meat and fish section which are, well, empty.  Not that cheese was replaced by olives in an attempt at not looking too empty while some hams were dropped in lieu of meat.... 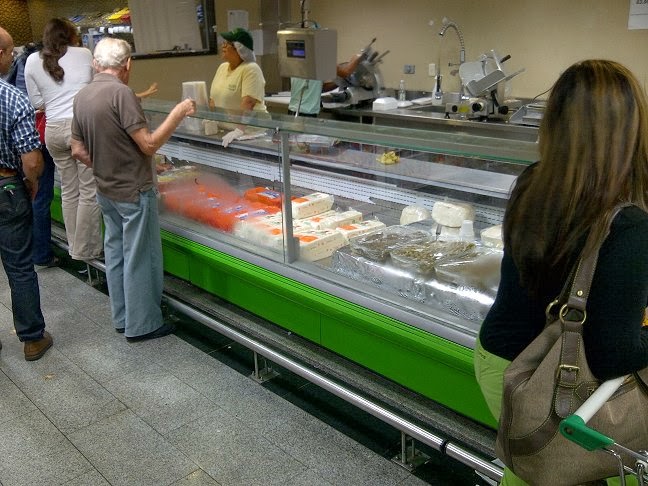 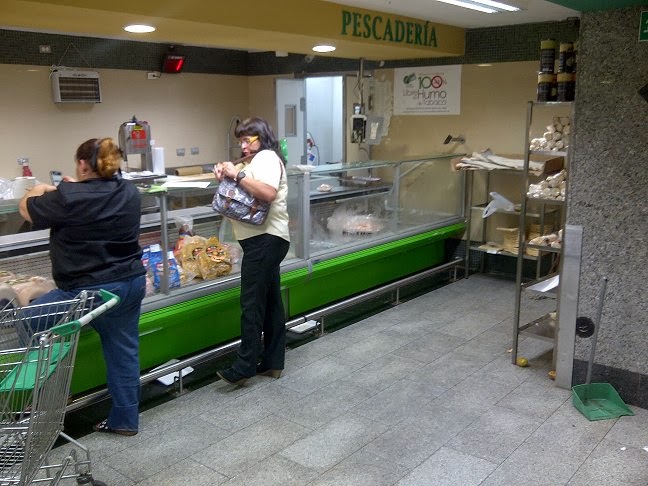 In another store, some scarcities do not even bother to follow price control as imported toilet paper that arrived in small amounts is quickly sold with a "temporary" price.... 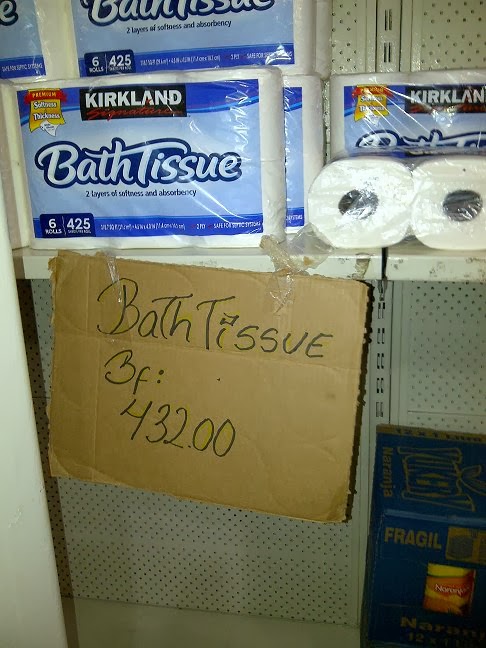