More pictures on the Yaracuy vote in Venezuela

As promised, I have taken a few pictures today to show how San Felipe has been gaily redecorated for the electoral campaign. But let me start first with two pictures on how we vote.

The first one is one you arrive at the table and you are greeted with the choices, to the right of which there is the button that will activate the voting machine.

Then when you are all cleared up you are faced with two "membranes", on the left. The same choices as before but now on a touch sensitive device. 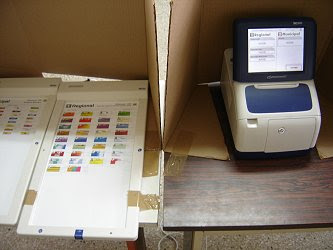 On the screen your choices appear. If all is right you push a "VOTAR" on screen button, there is a loud beep and the machine prints a paper receipt that you go and deposit in a box. Of course, you do check that the paper does reflect your choices...

Now, for the electoral decoration.

Graffitis of course are everywhere as it seems to be the preferred form of political advertisement. What is notable when we look back is how much people respect each other advertisement now, and how creative they are. Of course there must be a provision made for people who hold office who seem to have more money to spend in adds.

First an example of coexistence. This large Gimenez, the pro Chavez candidate, had on the right side a Victor Moreno painting added later. 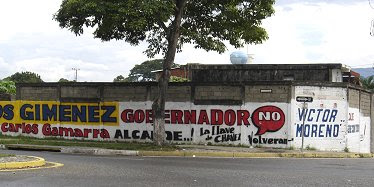 But respect is important. In La Independencia where Gimenez was mayor before running for governor, Lapi and his candidate for Mayor can paint an important street corner. 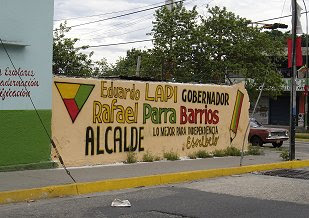 One thing that is interesting is the creative streak experienced, in particular by the pro Chavez side who has a rich tradition of grandiose murals from the diverse leftists regimes through history. We have thus either the "cartoon" example with a Yaracuyano "bourgeois" very upset as he is about to turn "chavista" once Gimenez makes it to office. 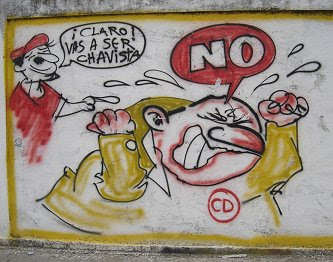 Or the more "heroic" style, strangely reminding run down Havana in the picture I took.. However, this been Venezuela, the land of misses, the women do not have heroic workers clothes, but rather skimpy outfits showing their voluptuous figures. You can be hot and red it seems. 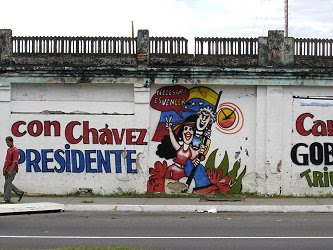 The left has always liked glorified big posters and even Yaracuy does not escape this genetic marker. The townhall of La Independencia had no qualms posting a huge portrait of Chavez supporting Gimenez. Not even Lapi would have dared do such a thing when Caldera was president. Besides being tacky, it is illegal. But law of course is a very relative term in Venezuela. 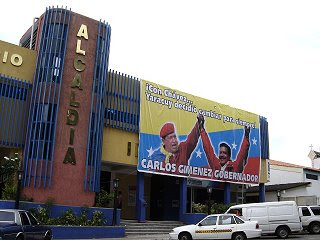 But all in all, this leaves us with gaily festooned streets where the pro Lapi and pro Gimenez propaganda coexist in a rather pleasantly surprising manner. 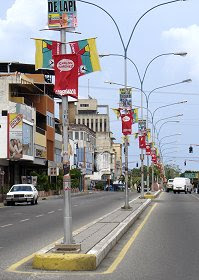 Definitely, living in the provinces has its nice advantages.