Sunday night I was working on a post on Chavez foreign policy, mentioning among other things the ridiculous proposal of UNASUR.

Well, today editorial of Tal Cual goes way further in criticizing that initiative of Chavez, wondering if it is not some type of middle age crisis that Chavez is suffering (Is it that enfant terrible syndrome that haunts this 50 Y.O. guy that make shim act like that?)

This with the perfect picture for random diplomatic violence, our new tropical Terminator. 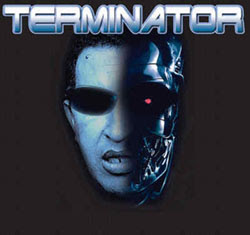 The translation of one choice paragraph at the end.

Latin America has been generating mechanisms of political and economical articulation(Group of Rio, Central American Common Market, Mercosur, ACN, Andean Parliament, Latino American Parliament, all sort of summits) that little by little, and with a few contradictions, have been strengthening the regional profile for its better insertion in the global village; and to be able to face with the outmost political and economical efficiency the challenge meant by being so far from God and so close from the United States (1). What Chavez proposes, in this case, seems to have been suggested by George W. Bush himself. For the gringos nothing would be better than that for the latinoamerican conuco to remain wide open to the ALCA river without any dike (2,&3). Operation "Trojan Horse" could be named the Chavez proposition in the coded language of the CIA.

This blogger is quite happy to see his ideas on the front of a most influential paper not to mention pushed even further as this paragraph so eloquently exposes. He is just sorry that it was not already there on Monday...

(1) allusion to the famous words from Mexico as to why all of its problems: we are so far from God ands o close to the United States.

(2) ALCA is the acronym for the free trade intitiative proposed by the US to transform all of the Americas in a single barrier free market.

(3) "conuco" is the subsistence farming plot carved directly from the jungle in Venezuela, preferably close to a stream of water to facilitate some irrigation. It has become the pejorative symbol of an archaic mind "conuquero" or very rudimentary technology, of course open to any flood that can easily sweep the harvest away.