Meanwhile, with a GDP 14% increase Christmas shopping does not seem to be very strong....

That is right, in the middle of a civil war the Colombian economy keeps seeing investments and growth while its trade balance improves to the point of becoming a problem as the local currency increases 17% against the US dollar, making exports too expensive.

Meanwhile across the border the Venezuelan Bolivar went from 1600 in February 2003 to an announced 2150 in the next couple of months, with currency control and a 14% GDP growth. That would be, say, a 30% drop to the dollar. And a near 50% drop to the Peso? I think one does not need to be a rocket scientist to figure out that the Colombian economy is better managed than the Venezuelan one.

Michael Rowan has an excellent little article on a US congressional investigation over the NED money. I quote:

Congressional hearings in 2005 on these issues would be an eye-opener. As opposed to the Chavez regime, the U.S. Congress looks at facts before coming to a conclusion. The Chavez regime can present its case for which it has no facts, only political conclusions that satisfy its anti-American prejudices. The result is going to be a big surprise for the Chavez regime, which is accustomed to a rubber-stamp national assembly and pliant supreme court to obey their boss.

Weil on the New Year

After his pessimistic Christmas cartoon, Weil does an even more pessimistic New Year cartoon. 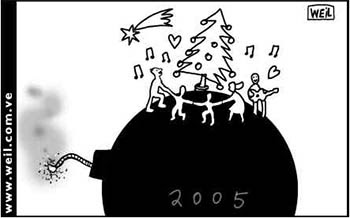 Let´s see. Packing of the court. Media control. Lack of private investment. Corruption galore with officials carrying 40 K US through US customs like any vulgar capo de mafia. Decentralization a thing of the past. A new police law in the works. A modified penal code to make it more anti terrorist (read: repressive). More and more military everywhere controlling everything. Etc...

Yep! No reason to be optimistic!