The chronic problem of informal street vending in Caracas has reached a new height today. But fear not, the escalation is just starting.

A few disgruntled street vendors were chased away by Caracas Police, namely Libertador district under the ineffable Bernal. Assuming this role is a novelty for a Police more known for its expertise at hampering opposition marches. I suppose that with no more opposition marches they have to find something to justify their paycheck as crime seems not to be their main preoccupation. Street vendors of course got very upset and in the grand tradition of Venezuelan protests they decided to burn some public transportation. 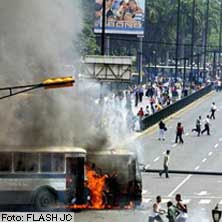 This is not the time to discuss the informal street vendor problem in Venezuela. Suffice to say that downtown Caracas has been taken over by a sea of stands that occupy and destroy most sidewalks. From the mouth of the vendors themselves it seems that there are all sorts of mafias that charge for spots, protection, pseudo-"taxes" and what not. Classical exploitation of the powerless applied by this government as it has always been applied in the past. And probably directed from some obscure corner of townhall who by its tolerance admits its role.

No, what should attract our attention is that this happens in the first day of the "gag law" and no images of the downtown violence has been shown. Actually, I turned on TV at a quarter to 6 whengot home and I only learned on Globovision about the trouble at 7:15, which made me check things out and write this post. If I want to see images of the event I will have to wait for 11 PM. Or edited images earlier. But how do you edit a burning bus and people throwing stones from behind?

PS: 25 were hurt and at least one is dead, on the latest news. So, we are talking significant disturbance, worthy of coverage.