Alo Presidente is back

The Sunday talk show of president Chavez is back in the air after an interruption of a couple of months "for redesign". The show used to be an itinerant affair that lasted from 3 to 6 hours where Chavez occupied the front scene, only relieved on occasion by some video or some "guest" making some form of expose. Alo Presidente was of course a must see of the political class as most of the maneuvers of the regime were announced previously from its set.

Well, the step to a formal TV show with Chavez as the host has been crossed (a dream come true?) 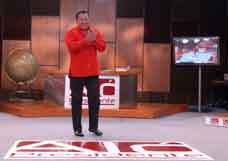 In that picture you can see the central desk (altar?), a huge globe where I can imagine Chavez will describe the numerous excursions that the intends to make to preach his anti Bush gospel, a fancy flat screen TV for videos on the right, and a large Alo Presidente inked on the floor with plenty of red.

The accompanying article in El Nacional let us know that the show will now be always broadcast from Miraflores palace (no more visit to the provinces?). There is a set to show entertainment such a musical performances, a set for interviews, a toll free number and a web page (with plenty of pictures with children). And of course all these changes in format come after "consultation" with the audience, err, I mean the people.

After I recover from that one, I will try to cover the real important news of the week end...

PS: added later. I checked the Venpres web page for more pics of today's show. I was not disappointed by the photo gallery. I have picked, in utter disbelief, two.

The first one is the bench where the ministers must sit through the show. Chavez likes very much to have a few ministers with him wherever he goes. But on Sunday most of then tend to be there (or else, we are told). What a perfect way to illustrate the autocratic style!!!! 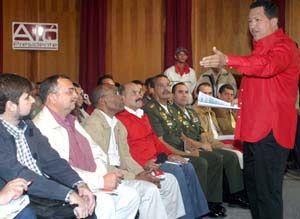 The second one speaks for itself. Maybe it is made for television, but really.... 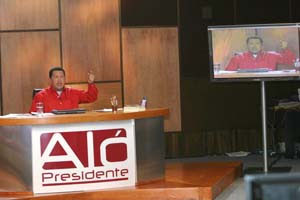 PS2: Much later. Truth is stranger than fiction. I have added this one because of the comment by Thomas. The interactive blog where the audience drives the input!!!!! 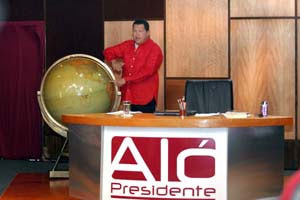 And I found tonight this poster of the famous Chaplin icon movie, ever so actual, "The Great Dictator". Sorry, I could only find the complete Chaplin with the French title for the movie, in English it was only part Chaplin and part Paulette Goddard :-) 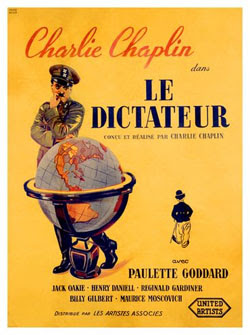 Disclaimer: any coincidence with real life is purely accidental and never intended by the writer of this blog. It is well known that truth is stranger than fiction. Besides it was the idea of one of the readers (see comment section), the writer not being smart enough to come up with anything that hilarious.