Land seizure and the deliquescence of the Venezuelan state

These past days have been rich in demonstrations that the Venezuelan state is sinking fast into some type of tribal units ruled by weapons. Sunday's papers reflected the marvelous contradictions in which we live, making Gabriel Garcia Marquez an illuminated amateur.

I wanted to start with the latest on the seizure of El Charcote, that X-thousand acres ranch in Cojedes part of a group of ranches owned by British interests. I use the X as a number since the true extent of the land owned, and by whom, has become the mystery du jour. And the source of quite a fight even before the Brits are expelled in what is the new Cojedes parody of independence war, with flown in chubby governor and all.

Apparently the governor of Cojedes, Yanez Rangel, had to come by helicopter as the roads were blocked by chavistas. Blocked by chavistas? Well, it turns out that there are two groups of people that want to lay their hands on the Charcote estate. Those that already grabbed a few acres 4 years ago, pretty much ruining the production scheme of the property. And those that the governor wants to give the land to, some cooperatives whose origin and function (and control) is not quite clear. However, those that have been sitting in on the land apparently will have none of it and accuse Yanez of trying to plug in his friends.

Where have I read such stuff? Oh! I remember! I wrote a few days ago about that possibility myself! It seems that I am not the only one that suspects that the cooperatives are only a front for some chavistas to make good with land. You set the cooperative. The cooperative conveniently goes bankrupt a few years later and some governmental official buys its land for a fraction of its real price. Incidentally that standard operating procedure has not been invented in Venezuela but seems to have a promising future here.

Miguel has already posted a few pictures to illustrate this high in color moment. But there is one that I want to repost in this page. (And by the way his translation of an interview of Carlos Machado Allison musing on the technical nonsense of it all is a must read) 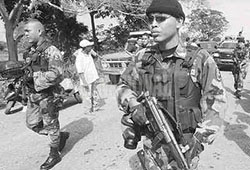 These were the soldiers sent. To control what? The docile management which has claimed that it wanted justice, which has already had to fire 60% of its personnel as the invasions have maimed production by 2/3? What gun power could possibly have 50 rural workers against even the body guards of the Cojedes governor? No, these "tonton macoutes" were sent because the factions between Chavismo forced the governor to come by helicopter. I find this picture quite symbolic of the degradation of the public power in Venezuela when a small state governor needs the Army to protect himself from "his" followers.

But if you want more degradation of public institutions you can read the editorial of Teodoro Petkoff coming back from vacation today. And what a come back! This lengthy editorial (posted here in Spanish) explains how Danilo Anderson has come from the revolution first martyr from a putative victim of a war between extortion groups. The only thing that remains to be settled, or so it seems when one reads the editorial, is whether Anderson was part of one of those rings, whether he was just a conduit for information and notoriety, whether the General Prosecutor knew anything (and, this blogger adds, whether Isaias Rodriguez was crying on Danilo's remains at his funeral or crying on something altogether different). All of this while Isaias Rodriguez acolytes are investigating who gave inside information to the noted investigative journalist Patricia Poleo instead of verifying whether what she denounces is true or not.

To close this post two articles quite telling on what lays ahead of us. Michael Rowan, in English, muses on the unstoppable wave of corruption due to the nature of the regime.

Corruption is reduced by institutionalizing independent checks and balances in the ministries, monopolies and enterprises of government, reducing the discretion of individual actors with great power, and eliminating secrecy altogether. Corruption is a function of the system, not the people who use it.


And yet another delicious article by Manuel Caballero yesterday in El Universal. There he muses on the declaration of totally discredited Pedro Carreño (of Montesinos and Direct TV fame) where he said that Chavez was the only "indispensable" within the MRV.

This is not only a confession, it a whole philosophy of power. Chavez is not only the coat which tails allowed to reach parliament and other offices people who not even in their most delirious dreams ever thought of reaching places of influence for which they were not prepared nor ever bothered to get prepared for; but if it were not for Chavez that political group would not exist.

I trust the reader to be able to tie it all up together.