Death by asphyxia in Venezuela

To all the diseases that we once thought were all but eliminated in Venezuela but who in this past 6 years seem to be making a come back (Malaria, e.g.), add a new one: death by asphyxia in Venezuelan public hospitals. Yesterday the big news was that in the night of Tuesday to Wednesday four people died of asphyxia at the Magallanes de Catia hospital as the supply of Oxygen run out. A media firestorm erupted. One side blamed the victim and the suppliers of gas and the other side blamed the total anarchy of Caracas public hospitals administration and the huge debt accumulated by the state to its doctors and providers; these can only be expected to hold the hat for so long until they just cannot provide their services anymore.

There is no point in arguing this case as the guilt of the state is only too obvious, such incidents multiplying fast as the collapse of the radiotherapy services in public hospitals reported in recent weeks demonstrates. It seems that all intentions and cash go for Barrio Adentro, the public relations program touted urbi et orbi for propaganda purposes while the hospitals infrastructure and services keep degrading. Unfortunately for Chavez, his propaganda tool of Barrio Adentro, for all its possible virtues, cannot go much more past some aspirin and simple stitches: it is a basic primary health care and it cannot perform the complex functions of hospitals, or even “half way” hospitals such as our “ambulatorios”.

But let’s look at the government excuse of budgetary constraints. Two characters to examine.

Barreto, mayor at large of Caracas, claims that the monies are not coming through (for which declaration he surely will be reprimanded severely!) This admission of how the Venezuelan budget has become Chavez personal purse where the states and cities cannot even get the share imposed by law shows the evil of centralized power. But even if we were more than willing to grant Barreto this excuse, the way he uses the monies that reach him are simply abject. Last July Barreto was involved in some totally un-transcendental dispute about the true name and foundation date of Caracas. This made him order a few paid 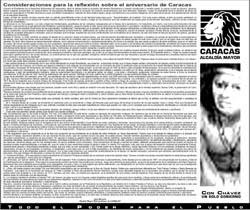 advertisements in Caracas newspapers, including even a FULL FOUR PAGES in El Nacional, on August 2 if memory serves me well. I regret that I have not saved it or taken a picture to use it today as it could not be found in El Nacional. However Miguel did send me this picture attached which shows already a half a page paid add. By the way you can observe just by the composition the pamphlet nature of the add.

This picture by itself cost, I am told, 6 million bolivares. The four pages which were at national level cost at least as much. And there were more, in more papers. So, let’s not be nitpickers and say that all his little campaign for massaging Barreto pseudo-intellectual ego cost Caracas town hall 15 million. I am told that the oxygen bottle that were missing cost 400 000 each. A simple calculation shows that Barreto’s ego trip could have bought 37 oxygen tanks. How many people could be saved? The reader can draw its own conclusions.

But some might say that I am unfair with Barreto, the mayor of such a large metropolitan area cannot be bothered with oxygen tanks inventories. So let’s look at Asia Villegas, the one in charge of medical supplies in Caracas town hall. That woman, instead of looking into how many Band-Aids were needed for Caracas hospitals did manage to pick up a feud with the US embassy. The reason? She was refused a DIPLOMATIC visa to go to the US for some women’s right conference. The embassy quickly pointed out that since she was not a national government employee she was asked to justify the reasons to demand a special visa when she could apply for a normal visa like this blogger would do. She preferred to make a big stink out of it, probably considering that as the sister of the ambassador to Mexico and of the star anchor man of the state TV, VTV, she should be treated like royalty. Such a revealing glimpse into the mind of chavismo!

There is no conclusion needed, the reader’s intelligence is enough to decide.

PS: This post although written by me has been researched and discussed by Miguel and myself. It is thus signed by both of us and will later appear in Miguel’s blog. The outrage must denounced in a single voice. You are invited to copy and paste in your own site and add your signature.
Posted by Daniel at 7:34 PM