In a breathtaking breakthrough, brisk and bright anti Chavez blogger Daniel Duquenal was unmasked as a pro Chavez agent. Apparently he has been writing all these years to confuse the silly opposition readers who thought he was some kind of guru, a dispenser of wisdom on how to tolerate the Chavez regime, even offering suggestions on how 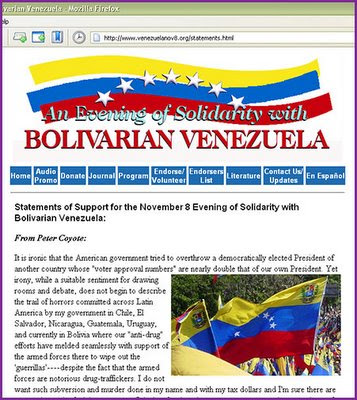 to sabotage that benevolent administration, but of course in a very inefficient way that these silly saboteurs did not detect.

The evidence? The photo to the right. This web page called for an Evening of Solidarity with Bolivarian Venezuela in New York City. In attendance a who’s who of lefties left out by the times and some Bolivarian circles related folks: Circulo Bolivariano Alberto Lovera, Ramsey Clark, Noam Chomsky, Peter Coyote, Marcia Campos, Danny Glover, James Petras, Congressman Jose Serrano, among other luminaries. Well, this distinguished company advertised using the Venezuelan flag, inserted on the quote by Peter Coyote, which looks incredibly like the Venezuelan flags that could be found on the top right of this blog for the last three years. There is no other explanation: Daniel Duquenal must have given copyrights of this picture to the event that was also a fund raising of sorts. It must have been his contribution after all the monies that he surely got through the VIO. And thus he is unmasked.

This picture was taken by yours truly in the first big opposition march of 2003, the one that made it to Los Proceres where it was ambushed by chavistas, supported by the Nazional Guard. This picture was taken on top of the elevated bypass of Las Mercedes as Daniel likes to take pictures and would not have missed a chance to benefit from that plunging view of a sea of flags.

Yes, that is right, the picture used by that pro-Chavez call to fundraising is actually a picture taken form a march that gathered at least 100 000 people bitching at Chavez. Now, that IS egg on your face for the organizers of the event, people that were unable to find pro Chavez flags among so many multi million marches that chavismo has claimed. How come, guys?

And yes, I do have the original picture which is larger and was trimmed to fit in the glorious position it has occupied, welcoming readers wanting to know more about how chavismo is degrading the moral soul of the country, including intellectual and artistic property rights. So I can prove what I am saying and bring further embarassment if necessary.

Not that it matters much, I have lifted material myself to illustrate my blog, but I was always careful not to pick up material from the other side as if it were from my side… No, it is just hilarious to see how incompetent these guys are, be they in Miraflores or in New York City! And also how closely my blog is followed by chavistas. Welcome guys! Hope you learn something!

Something else, not quite related but perhaps appropriate for this occasion. I have been discrete about it, but last October 8 Harry’s place, one of my favorite leftist blogs, published a simple but meaningful internet interview of Teodoro Petkoff. Yours truly helped to set up the contacts and translate the replies. I did not announce it because, well, I was traveling at the time and it was really Gene’s idea. And, besides, I am not a name dropper and I do not take credit for other people work, EVEN if I actually have a significant input. But I suppose that this is why I am not a chavista. Thus, it had to wait for more than one month, it had to wait for prodding by such antics from a silly Bolivarian circle to finally bring me to claim my part in that work of Gene. Hope you understand Gene! Great job and I hope we will work on an additional and more complete interview when Teodoro finally runs for office.

Ah! Blogging can really be fun on occasion!

Hat tip, Mora y Leon, of all people, for unmasking me!