Our daily “cadena” , plus bonus Venezuela versus Mexico

For those who are coming late to this blog, I have the sudden urge to describe what a “cadena” is. The reason is very simple, it is 8 PM and Chavez has decided to force upon us a “cadena”. That is, ALL TV bands, ALL radio stations, all airborne media MUST transmit simultaneously the speech of Chavez for as long as he wishes, on any matter he wishes to, without anyone being able to interrupt him and confront him on anything he might fancy to utter.

So, without further ado, a simultaneous blogging of a cadena.

It is 8: 15 PM, suddenly Grado 33 is interrupted and from afar I hear a chorus chanting the national anthem. Cadena! I think immediately in that exquisite conditioned reflex we have developed in the last 7 years as cadenas are a on average a several times a week fixture. That I did not hear the official announcement means that Globovision was late in joining the cadena. Hopefully it will not be fined.

8:20 The chorus is over. A voice announces that the program will be announced. Apparently it is a cadena of some formal event. The spokesperson of the housing ministry announces that this is a non partisan event, it is an event where the bankers and the government are sitting together to announce new measures to help people acquire housing, a joint effort to benefit ALL Venezuelans. Groovy! National reconciliation must be starting at last!

8:25 The announcer also adds that the usual formality for such an event will be discarded and it will be a dialogue. And the first person who is invited to speak is Chavez. End of the dialogue…

8:26 Chavez starts talking. He does not start with housing. He starts with the Mar del Plata fiasco. He starts by saying that he brought videos with him from over there, videos no shown by the main stream media, videos that will reveal what rally happened there. I suppose that the building destructions at Mar del Plata have some relevance to the new housing program about to be announced? Then Chavez starts qualifying Mar del Plata as a real hard fought battle. (Applauses, that will be, by the way, punctuating any cheap patriotic moment or Chavez glorifying incident).

8:30 But the criticism received by Chavez o 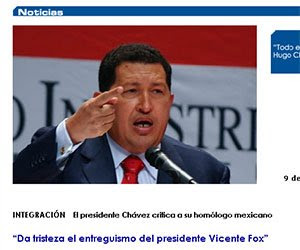 n his actions on Mar del Plata must have stung. No mention of Maradonna or even of the rally at the stadium! Just a very generic “we did this and that”. And to support that Chavez is pissed off, really pissed off, he started attacking Mexico Fox. His words against Fox, I kid you not, are worth of a breakup within the countries. Fox is simply accused of been a coward at the service of the US. Well, maybe it is true, but it certainly not up to Chavez to say that!!!!! I was simply stunned. Not to mention that he would resort to such a vile maneuvers to distract from his own failures, from refusing to admit that 29 countries were on the opposite side of Chavez and only 5 on his. But then again arithmetic have never been Chavez forte.

8:40 Then the cadena moves on to national policies. Unemployment is down, interest rates are down, reserves are up, etc… And the attacks against private properties? Not true! Look, they are all negotiating with us and some have even told us that they indeed have too much land and that they should give it away. But my favorite! International reserves are up thanks to the good economic policies of Chavez. Without mentioning at any point that there is a stringent currency control exchange. But I should have known better, it is all a simple excuse to discuss how much excess international reserve Venezuela has and thus how justified is Chavez to dip in them for social programs and projects (let call them all social programs since we are on election period).

8:55 After miscellaneous self aggrandizement, then the projects started. My favorite so far: the problem of the Marcaibo lake are all due to entering of salt water. All the sad “lemna” invasion (an algal thing overgrowing everything on the lake for the past two years), oil spills that pushed the government to forbid private planes above the lake, etc… is all now excused and forgotten: it was the sea. I was in such shock that I even failed to hear the solution he offered (well, the phone rung also).

9:00 Now that I ma back to listen to it, he is talking about railroads all over Venezuela. And he shifts to all sorts of promises.

Now it is obvious where this is going on and the reader will understand why I have a hard time going through even half an hour of a Chavez cadena. Today I did good, I was not watching it (I cannot stand the grimaces he makes when he talks, and even less when he insults people that cannot defend themselves from his unfounded accusations; such cowardice sickens me). But even if I listen to it from my computer, answering my phone, picking up my nose, there is so much I can take.

9:04 It has been already 45 minutes of “dialogue” and only now we are finally reaching the housing problem. He starts by congratulating the private sector present to the ceremony. Do they have a choice? Don’t they need those contracts?

9:18 I was on the phone. He is now telling us all the new credit measures he is taking (or was that re-taking) to promote housing construction. All of these measures have failed so far, I am allowing myself to be pessimistic. But the atmosphere is warming up, now that the has emptied his disgust at his Mar del Plata failure, he is more genial and he is making silly jokes on people forced to live with relatives after their marriage. Whenever he announces the numbers of the credit rate depending of your income, people applaud as it it were a great novelty. All of this is warmed up form about 6 months ago.

But the fact is that this cadena has already shown its objective. It is a naked electoral propaganda imposed on all of us, in a way that the opposition cannot counter, that the CNE will not punish. It is an completely unfair tactic, an unspeakable advantage, for the chavismo electoral campaigning just as a few days ago a few youth of Primero Justicia were arrested for posting tracts.

You know what, I had enough of this shit, I am turning off and going to bed. The smart reader will know what to think about it.

PS: observe that at 9:34, the information/propaganda ministry was already publishing the criticism to Fox!!!! With photo included of Chavez during the cadena, which of course this real time blogger even put up with the caption! You can even appreciate the accusating finger! All planned, all manipulated news, all the time.

PS2: I have received a BBC link where you can go and vote as to your opinion on Chavez. Comes with a Petkoff participation. Plus a meaningless but ever so delightful beauty contest among South American presidents.
Posted by Daniel at 2:44 AM