The politics of cultural ridicule in Venezuela

A political culture based on sycophancy degenerates fast. Predictably Venezuela is taking the path to adulation of El Supremo, and his sayings, as the only valid form of cultural expression, and I am being lax with the use of the term "cultural". Thus what better way to start this article but by posting now a familiar sign in the highways of Yaracuy, where governor Gimenez, barely a year in office, is creative enough to use Chavez to promote his own self image. Living around here I can assure that Gimenez needs all the placards he can post around to stop the fast degradation of his image, as he is revealing himself as lousy a governor as he was a mayor. But Chavez wanted him and that was that. 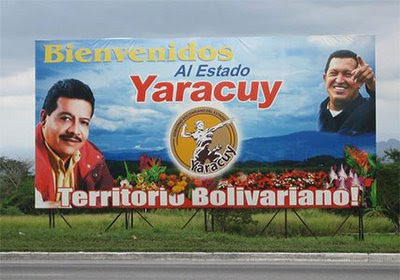 Observe the appropriate propaganda items. Chavez is on top of the mountain, modern day Moses, pointing the right way from his left hand. The choice of the Venezuelan flag colors for the welcome message. The recovery of the statue of the Yaracuy cacique with the faded colors of the PODEMOS party of Gimenez. The Bolivariano in red as the Bolivar aristocrat is now equated to a Lenin precursor. The rural suggestion of the background (not even the emblematic Sorte mountain of Maria Lionza!). And of course the element that cannot miss from the wardrobe of any self respecting Venezuelan: the heavy jacket in a tropical country, harking to the Mantuano past! (1) I wonder if Gimenez realizes how much of himself this billboard reveals.

But this new cultural revolution creates some other weird items. For example the new logo of the revolution: "Venezuela now belongs to all". 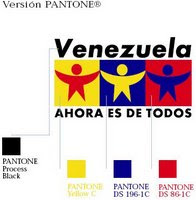 If you visit the pages of the Communication Ministry, one of the names that a propaganda ministry might want to use, you will find at the bottom a few tabs. One of them will lead you to a PDF file where you will learn all the ways to use properly the revolutionary logo, color systems, proper ministerial positioning of legends around the logo, all… It does make for quite a fascinating read to see how propaganda is made technical, how the little people are not allowed to sway away of the "right" usage of the logo, a logo acquiring now biblical proportions.

But there are more and more laws voted or being about to be voted as to what is proper culture in Venezuela. I will pass over the "Ley Resorte" which I best refer to as the "gag law". One of its dark sides is that now all musical radio stations must present half of their music coming from Venezuelan sources, and the rest from the rest of the world except that 20%, I think, must come from Latin America. The first result is that all the radio stations that I used to listen to for their mix are now boring, resorting to top international 40 and more and more obscure Venezuelan productions whose obscurity was well deserved. 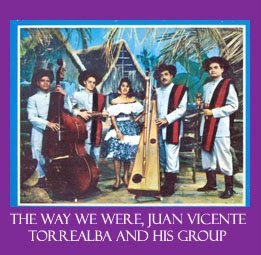 I am not opposed, mind you, to the promotion of Venezuelan music. But successful Venezuelan music usually had managed to peak through no matter what. Outside of Caracas you could find, in pre "resorte" times, quite a few radio stations that had 90% and more of Venezuelan music ("llaneras", for example, audio here). Indeed, why not give a 10 or 20% of peak hour music to Venezuelan bands? I am all for it. But when 50% of all broadcasts must be Venezuelan? Please! It is only a 25 million people country and no matter how artistically and musically gifted we are, well, it just ain't enough quality musicians hanging around.

But the obsequious bureaucrats, not realizing that the real objective of the "ley resorte" is to promote, and successfully at that, self censorship of the press, are taking seriously that quota system. The other day I heard of a proposal for forcing the broadcast everywhere of native American Venezuelan tunes. I find this simply anthropologically racist. Why not give the natives the means to buy modern and performing instruments so that they can transcribe and enrich their tunes in the this brave new world of electronics? Or is it, like the Nuevas Tribus cases, that the bolibanana revolutionaries are seeing the natives as "good savage" having to live as natives with little skirts in a semi zoo atmosphere? I am pretty sure that the Yekuanas of the Amazonas would very much like to have TV and refrigerators to come back home after a day out in the jungle. (You can read the official lengthy and highlighted version of this affair here, and a different version here, and the protestation of some of the natives here)

But the ultimate in ridicule was the announcement published September 30 in El Nacional that the Philarmonic Orchestra would follow the 50-50 distribution of music mandated by the "ley resorte". At least someone realized that Sojo might not be enough to fill up 50% of the concert programs and the 50% of Venezuelan classical is understood to include Latin America composers. We are in for overexposure to Villa-Lobos and Ginastera. Really, one thing is promoting new Venezuelan talent but when the Philarmonic equates the three B to XXth century Latin America composers you start wondering about the cultural integrity of the whole business. I quote the director Martinez:

Last time I read this type of language was when Nazism thought that the three B and the W were enough for the Reich.

But plastic arts are probably not far behind in getting their own creativity burst. In addition of all these new political posters now the Latin Parliament offices in Caracas are sponsoring a graffiti contest (they call it "mural", sounds better, as they bravely assert that graffiti will not be allowed) where Chavez must be the central figure. 5000 dollars will be spread among the best three entries which must measure AT LEAST 1.5 meters high by 2 meters long. So we will not be able to miss this developing cult to Chavez while we drive by. I can hardly wait…

So, where is the root of all this mediocrity? With the mediocre Supremo himself who is reported by CNN as bashing the Halloween celebration which has been slowly creeping in Venezuela (no word about closing McDonalds yet, something that I actually would think about supporting!) According to Chavez Halloween is part of the US culture of terror.

"Families go and begin to disguise their children as witches," Chavez said. "That is contrary to our ways." 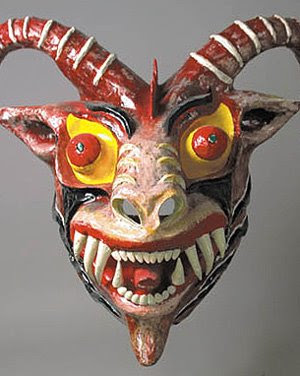 Which as usual is totally false, one of the now innumerable Chavez lies. I could point out to the world famous festival of Yare (scroll down for the English text story).

Politically Correct ghoulishness?
You can see clearly that the masks worn are the devil imaginary in Venezuela which in my humble opinion is pretty much the same as the imaginary evils that are represented by Anglo-Saxon witches (which by the way have long been adopted in the Venezuelan imaginary).
This display of bad taste, bad culture, general ignorance, would not be so bad if it were limited only to what we can get as of now on walls and air waves. The perverse effect of these initiatives will be the same observed everywhere, from the Buena Vista Cuban music long forgotten, to the book burnings of Germany circa 1935. Any good Venezuelan production will be shun: the ones that will get promotion are the mediocre efforts of the ones who wish to flatter Chavez with their works or those who are already recognized as Chavez supporters. Unfortunately it certainly will not stop that as the cultural utterings of the Supremo might have weird and dangerous consequences as people going to jail for Halloween political pranks (here and here).

1) In colonial times only the rich were allowed to wear a coat, manto, for some obscure reason. Thus the term "mantuano", coat wearer, a spiteful way to call the rich. But no politician would be caught dead without a coat except Chavez who is like Churchill in his wearing of all sorts of disguises.

Hat tip to the reader who sent me the CNN article. I looked and looked but could not find the original mail to post the proper acknowledgmeent. You know who you are!
Posted by Daniel at 1:02 PM