Well, the week started with a bang. It should have been so as El Nacional (subscription) did publish some statistics on Venezuelan poverty last Sunday that put to rest any type of attempt at the Venezuelan statistic agency (stress on agency as "agent manipulateur"), INE, to change the way poverty is counted. Indeed, by changing its ways INE has demonstrated that the great bolibanana revolution has been able to make and unmake poor people at dizzying rates! Only war times can make poor as fast as in Venezuela, from 14 to 25% in barely two years of Chavez administration (and starting, by the way, in 2nd semester 2001, before all the political troubles, see the little opalescent jewel added). And it unmade them from 24 to 10% in barely one year. Even Asian Dragons did not do as well in their better years. The graph appears as a PDF object in the INE page and I have extracted that picture were I added some comments. In other words, even when they cheat, they cannot do it right and it shows blatantly. 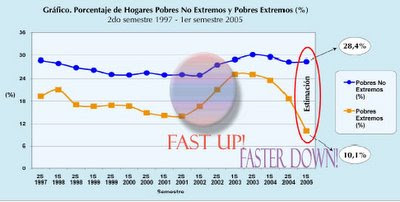 Extreme poverty (E group below?) in yellow. In blue poor "not extreme"!

But the CECA study published Sunday in El Nacional seemed a little bit more solid than the INE, and certainly more in tune with what I see in the streets. CECA focuses, at least as published, on the socio economic sectors E and D, which are the very poor and poor respectively (supposedly those who hold low pay wages). Well, together they represent 86% of the population (which seems high to me and this commentator). At any rate, according to CECA, in strata D and E only 32 % of people belonging there had three meals a day (2/3 eat only one or twice a day!); most spend their income on food and public transportation; 31% only were employed while 25% worked in the informal sector and a whopping 44% were jobless. Only 2.1% reported a monthly income of more than 240 dollars, that is, MORE than the minimal wage. Obviously 76% of them used the Mision Barrio Adentro for very basic Cuban sponsored health care (they cannot even afford public hospitals as Norwegian TV viewers know) and 72% went shopping for rice and beans at Mercal, subsidized state food. A further commentary on that survey pointed out that if the poor were still poor, there was some new 55 000 rich in Venezuela, almost exclusively military, public employees and associates of the government. The so called "boliburguesia" in numbers is getting into the select few of the A-B strata counted at 3.8%. That, I have observed myself. (1)

While people were left to sort out on Sunday as to which of CECA and INE were the closest to the truth, and how long until they moved to D or E, the news kept apace. The latest initiative of state interventionism is now the barely disguised attempt by the state at recovering SIDOR, the steel concern privatized just before Chavez came into office. As a private company SIDOR seems to have made some comeback from the "in the red" days, though a few problems were still around. But of course that meant that steel had to be sold at international prices and Chavez does not like that. If our gas is cheaper than bottled water why should we pay for steel?

To bring further confidence in foreign investors who certainly did not need to read about SIDOR problems in the newspapers, in addition to the land seizures, it was announced that the sales taxes and the bank movement tax (you pay a tax whenever you withdraw from your account in Venezuela) would not decrease in 2006. Certainly in Venezuela electoral campaigns are hugely populist affairs and even with an oil barrel at 50 USD Chavez needs all the money he can.

But these bad numbers and lousy administration do not stop Chavez from launching unrealistic projects in a country were indigence keeps going up, no need of statistics to see that. This morning as I was leaving for work an indigent was camping in front of the building door asking for clothes. That was a new one for me: begging used to be done at street corners, but I suppose that increased competition forces indigents to go to residential areas. The answer of Chavez to that? 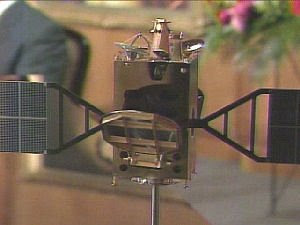 A noon time cadena (2) to announce the construction of the first Sino-Venezuelan satellite (in English here) . A satellite for Venezuela? Why? How are indigents going to afford the satellite dishes for signal reception? The picture of the model is priceless in its cheapness and the articles accompanying it even more so. Both the state radio and the information ministry article allow the sharp mind to realize that the Venezuelan participation will be minimal and that only a few Venezuelans will be "trained" in China ( read, will watch Chinese technicians and eat dim sun while watching). None of these articles mentions the lengthy and almost savage cadena (I was home for lunch); but Union Radio does report the cadena and also that the real use will be for the army to control better the country (you know, opposition movements controlled through satellite and the Bush invasion too).

To close this economic delirium tremens, Chavez also announces fiery speeches at the America summit in Argentina, where he will do all what he can to sabotage Bush visit there. Apparently Chavez is going to Mar del Plata to bury imperialism (just as he buys Chinese wares, helping along the renewed Celestial Empire, by the way. He needs a speech writer!). I wonder what president Kirchner, the gracious host, thinks of that coming show as Argentina negotiates discretely with all sorts of International agencies and is getting back into the international markets that Chavez wants to trash.

But if you think that internal politics could not match this bevy of economical news, you were wrong. As the electoral campaign for the legislature is just starting, the presidential party, the MVR, with its now legal, if unjust, morochas, a party who is planning to get 80% of seats thanks in large part to the complicity of the CNE, is already attacking the meager opposition effort. Apparently the opposition will not even be able to paste posters as its supporters caught doing so will go to jail. However the trumped up charges of the overzealous public servants (?) who arrested these Primero Justicia activists yesterday were not enough and they are already out on bond (in English here) . Still, the message is clear, the MVR with all its built in advantage is looking for terror tactics, for any ways that will shut up the opposition once and for all. Some democratic group! The interesting question is in fact why is Chavez, and MVR, so afraid of PJ? Because the nation's controller, unable and unwilling to sanction all the corruption seen around, did manage to find a minor misdemeanor in the accounting of Chacao Mayor that could inhibit him from running for office for 6 years! (English here). No one else in Venezuela has got more than 3 years since Russian (or is that Ruffian?) assumed his post 5 years ago. And Chavez, just by the FIEM case three years ago should actually be dismissed just as Carlos Andres Perez was dismissed in 1993 (3). This political manipulation is so obvious that one is left to wonder: why are MVR and Chavez so afraid of PJ? Chacao Mayor rules the best managed and wealthiest town hall of Venezuela, where the new 55 000 chavista millionaires are trying to buy expensive condos. Just next door of crumbling downtown Caracas whose two elected managers, Barreto and Bernal, are so incompetent that Chavez just put a general to administer the downtown core section! (4)

Indeed, Primero Justicia is demonstrating that without the flood of money that Chavez is wasting, just with what they collect on local taxes and what the national budget is FORCED to allocate them, they do a much better, much more efficient job, if not perfect, than the Caracas popular district where pro Chavez mayors who get boatloads of money waste it as well as any appointed chavista official. And mediocre people cannot stand semi successful ones, even if they can buy fancy (?) satellites from China.

Pass me a valium, please! Even if Chinese generically made!

PS:
1) Boliburguesia. The nouveau riche of the bolivarian revolution. Mostly military personnel, contractors with the state, public "servants" and all those who serve as a cover for the laundering of corruption monies.

2) Cadena. The forced simultaneous broadcast on all the TV and radio stations of Venezuela of Chavez lengthy speech whenever he feels like it. With no right to reply for the people attacked by Chavez; no jourtnalist asking questions; no nothing. Plain propaganda, uncompensated for the media, at the government's will, even during electoral campaigns. As unfair an use of the media as it can be imagined short of closing outright the private media.

3) FIEM case, "malversacion". The unauthorized change in the usage of budgeted items in the administration. Chavez a few years ago shifted money to "supposedly" pay public servants. Todate we do not know exactly were those billions went. This is a violation fo the Venezuelan law and cost Carlos Andres Perez his presidency. But in Venezuela a minor ministry employee was made, just recently, the fall guy. Well, Lopez of Chacao did the same thing when the governmet did nto send the moeny to pay for the firemen, the police guys and other municipal employees, all documented to the penny. But apparently he will not be allowed to have a fall guy. Comptroller Russian is becoming one of the biggest Chavez whores!

4) Downtown Caracas. A crumbling district, under dirt, garbage and lack of elemental maintenance, to the vociferous complaints of Chavez himself. Not to mention that street vendors occupy now all the main streets of downtown where tourists cannot go anymore. It smells now permanently of urine, even during the rainy season.
Posted by Daniel at 5:36 AM