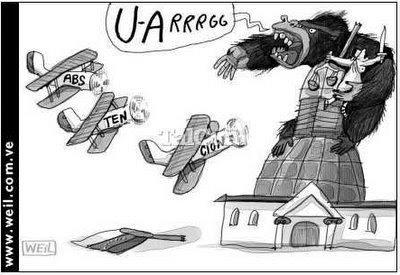 When you listen to the declarations of Maduro today, attacking the Venezuelan judicial system just because some ruling did not suit him, you might even wonder how prescient Weil was two days ago when he drew this cartoon.

Chavismo is on top of our Capitol dome, holding justice hostage while abstention (the one of December 4) is driving the beast crazy. Indeed, it seems that chavismo cannot find its bearings after that set back and instead is looking for ways to exact revenge from all of these people that dared not to vote for the beloved leader (who by the way is mad at the chavismo "leadership", blaming them for the failure to rouse the voters, never thinking, not even for an instant, and certainly not seriously if he does, that he might share some of the guilt).

Note the scream of King Kong, starting just as the chavista rallying scream... Uh! Ah! Chavez no se va! The only silly jingle that the revolution has been able to produce in 7 years. Even there the 4th Republic was more creative, having a couple of memorable new jingles every five years. 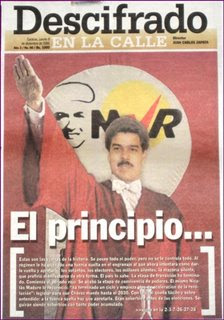 But indeed the attitude of Nicolas Maduro this paste few days is really worrisome. One cannot but wonder whether he feels he has to be more chavistas than Chavez or whether he is really the leader of the "extremist" wing of chavismo, wanting to push the "revolution" to its final consequences. Or if simply he feels he is losing it and it is now or never. Indeed, his mediocrity is well known and he has been able to show some efficacy only in the last year of parliament as its head, when all the rules had been changed and debate was all but inexistent. As the picture next shows, Descifrado has him well pegged, like some of those magistrates in some former totalitarian state that shall remain nameless. Servile, obedient, uncreative unless it is a matter of looking good in front of the boss.

Those are the type of people we have been cursed with. I just hope that Descifrado is not as prescient when it writes "The beginning..."
Posted by Daniel at 4:46 AM