Holydays are upon us and it is time I go to my family for a well deserved rest. This blogger has worked really hard for the last few weeks and deserves a break. That does not mean I will stop writing, I have a series of posts in mind to answer some of the questions I raised a few days ago. But I will deliberately not cover the news unless something really major hits us. I doubt it will happen as chavistas as well as anti chavistas are exhausted. I trust all will look for some egg nogg drunken stupor, or 18 year old Scotch.

Thus, hallacas and good wine helping I should put my thoughts in order and post something every 2 to 3 days only. I hope that you will be all too busy to read this blog anyway. But if not, I hope that the posts will be good enough to elicit more of the great commenting that we have had this last couple of month. Good comments are the best source of inspiration.

To leave you in the spirit of the season, I will describe a new aspect of the cultural war that Chavismo is trying to pull out.

After the Halloween condemnation as an imported holyday to terrorize children, Chavez has somehow alluded to Santa as been too much of a yanqi symbol. Or something like that, I cannot be bothered looking for links to such nonsense. But of course his sycophants have moved to remove all sorts of “imported” Christmas symbols and promote the local ones. This is of course ridiculous as Christmas by itself is an imported feast. Not mentioning that Venezuela has very strong Christmas traditions that are far, very far from being threatened: season foods cannot be beaten, Venezuelan Christmas music is just superb, the “nascimientos” are always seen next to Christmas tree, and often much more lavishly arranged. One wonders if secretly, after banning Colombus and the conquistadores from our pantheon, Chavez would not mind banning Christmas and religion, in spite of his cyclical mea culpa and pro Jesus statements.

Yaracuy governor, Carlos Gimenez, would not be far behind. Mercifully all references to Santa have not been banned, and old lights have been used to decorate the state house, one of them a rather incongruous reindeer. The novelty this year is cheap theater decorations sprouting in a few places. They represent a nativity with “ethnic” Venezuelan people.

Now, there is nothing inherently wrong with that. After all many fundamentalist in the USA love to paint Jesus as a very Aryan blonde blue eye GQ type. I suppose that it befits groups of people to relate to their God pictorially and a case could even be made that the real Jesus looked more Venezuelan than Aryian. But I digress.

Below you can see a picture of one of those nativity scenes that are now gracing some of San Felipe streets or Yaracuy roads. Syncretism, with baby Jesus pointing to the orchid and turpial. Some wits have pointed out that the model for baby Jesus that appears on many of such compositions looks suspiciously as what the governor would have looked as a baby. 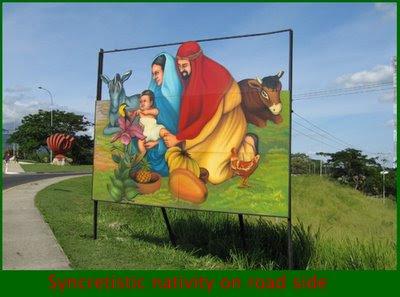 Then when we go to San Felipe Bolivar square we are treated to a plastic Christmas tree, no Santa in the decoration. However on the side, there is a life size nativity scene and old habits die hard, the angel on high is blonde. 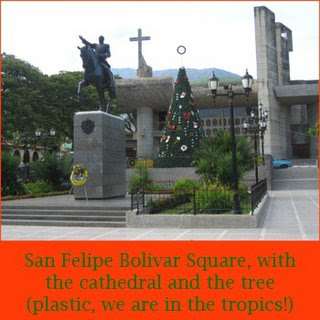 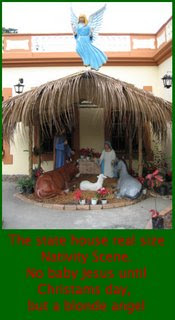 And this is what is really sad in this silly attempt at making Christmas more PC: they are not original. Already Andres Eloy Blanco, one of our greatest poets, did write about the need of little black angels, in some of the most beautiful verses of the Spanish language:

I could even mention the Venezuelan Christmas Jingle, “Si la Virgen fuese andina y san Jose de Los Llanos, el niño Jesus seria un niño Venezolano” (If Mary were from the Andes and Joseph from the Llanos, Baby Jesus woudl be a Venezuelan baby). I do not know about you, but these went well beyond syncretism, PC, or self esteem cheap boost. This was art. Poor is the culture that can come up only with cheesy billboards of a “native” scene.

And while I am listening to Garth Brooks Christmas album “beyond the Season”, I wish you a good holiday.

PS: the Christmas theme for the legends of the picture did not come out right. It is too late and I have no time to fix it, sorry. But if you click on the pic, you can see it larger and you can read the legends. I'll try to fix it up later.
Posted by Daniel at 5:28 AM