Votes, abstention and lies in Venezuela

It is time to do a brief overlook at the last Sunday election. As I already wrote, the only interesting result is the abstention vote. Whoever has been elected is irrelevant: they all belong to the government (not even an opposition representative, only 4-5 “dissidents” that will vote 98% of the times with Chavez laws, at the very least, just to show the “plurality” of the assembly). The only thing worth watching inside the new assembly is the infighting for access to contracts and goodies. After all, there are more representatives to feed, so to speak.

I did look at the following things: some big states, the state that “suffered” from foul weather, and at the results from 2004 in those states. Why?

The rain effect: even in the "open source" show professor Hellinger run the canard that the high abstention was due to heavy rains in many areas of Venezuela. This was false as rain only affected Vargas, Miranda, Sucre and Nueva Esparta. The rest of the country had fine weather or at most a quick shower, such as Yaracuy who got a slight drizzle gone by 7 AM when the sun broke out for the rest of the day. Thus I rated these states as going from no rain to significant rain and the abstention for these states. The reader will see in Table 1 below that rain had at most a minor effect in the abstention rate, and in small states at that, Miranda state being the only big state where some heavy rains fell. We can pout to rest this excuse.

The null vote: I also looked at that because it was said that many people forced to vote managed to vote null with a system that is supposedly designed to limit null votes. We can see a general increase in the null vote amounts from Table 2 to Table 1, but nothing really to draw major conclusions.

The chavista real share: the only thing left to measure is the real share of the electorate that belongs to chavismo, what we could call, with some reserve, the chavismo hard core vote. For this I took the percentage of people who actually voted, I subtracted the percentage of null votes and I multiplied by the percentage of people voting in the At Large list for the Assembly (Table 1). In Table 2 I did the same thing with the governor election. The reader will recall that these vote share decreased a lot, from the Recall Election 2.5 months earlier! Well, table 2 shows in light beige the difference between the columns in light blue. The loss of chavista vote in one year is definitely considerable, and even more so if I were to use the Recall Election numbers. 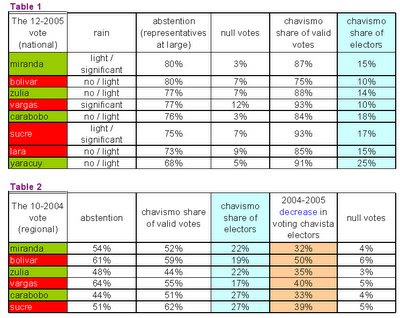 There is even the election result that confirms the rule! If you look at Yaracuy, the asbtention increase is much less significant than in other states, comparable to what one would expect going from legislative to state, and NOT the other way around as we see now. But let's call this a detail. Even though I did report empty voting stations, participation was higher elsewhere in Yaracuy than in San Felipe it seems. But Yaracuy is an exception because 1) it had a low abstention in October 2004 compared to other states due to a vigourous campaign by Lapi and 2) this time around there was a deep split between chavista files resulting in 1 dissident elected, Capella. The elections were thus interesting enough for chavista Yaracuy voters. Yet, the increase in abstention is huge! And validates the observed voting pattern elsewhere. Probably Yaracuy reflects best the real hardcore chavista vote number, when the chavista voter is interested in the issues at least.

Conclusion: it does not matter how chavismo massages the numbers, twist them, invent excuses and explanations, it cannot hide that it basically lost half of its voters. And this is considerably aggravated when one looks at all the pressure exerted by chavismo to have people vote, going as far as forcing government providers pay for transport for voters, making public transportation free in many places (Caracas subway), threatening people with job and contract loss, etc, etc… The task for next December is to recover at least all the lost voters, no easy feat by itself, and impossible with that CNE. Chavez can forget about the 10 million. Oh sure, he will win, but with what? 10%? Where is the “participatory democracy” if nobody participates?
Posted by Daniel at 6:13 AM