Censorship in Venezuela: it is official

The latest news from the general prosecutor is truly frightening. Basically he wants the government to control any information on the Danilo Anderson case. The problem is of course that the free press has unmasked the witness upon which rests all the case, or so it seems. Is it the fault of the media that Isaias Rodriguez has decided to base his case to arrest score of people on a single dubious and now discredited, and more than likely a pathological liar? Where is the other evidence Isaias? 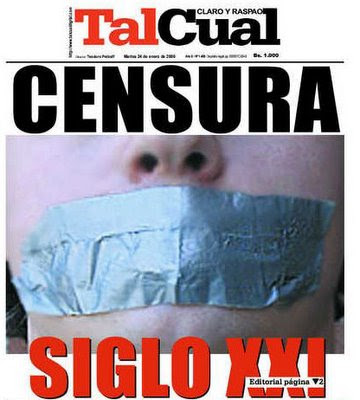 Tal Cual of coruse was not going to let this go and at the end of his editorial Teodoro even throws the guantlet to Isaias and the government at large. I translate the end (full editorial here).

But this goes further than the Anderson case.

This must be faced down with all resolve because this event looks too much like a general trial on censorship over freedom of speech.

Over the last two years the government has managed to create a certain level of self censorship through the "gag law" on the airborne media. But it seems that it is not enough. And with this "excuse" it is trying to silence further the air waves media, and or the first time to hit directly the written press.

The escalade continues. It seems that fake statistics and bombastic speeches are not enough to hide the reality of the country.


Note to the attendees of the Social Forum: you might want to follow this affair closely as to get a good idea of what is really going on in Venezuela.
Posted by Daniel at 9:18 PM