The first march of the year

While I was trekking to the airport (see previous post), the opposition was holding its first real rally in a long time. In fact, by far it seems, the biggest rally since the pre recall election days. I did get this photo in the mail which seems convincing enough. 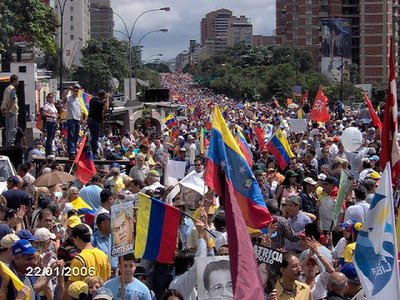 We are not in the half a million mark yet, but without buses, no means and quite a lot of fear from a now unfriendly Metropolitana, it is quite a turnout.

An anecdote. On the way to the airport (no, we could not make it to the march as we were escaping Caracas through the mountains) we were listenening to Alo Ciudadano. Some caller, a guy who gave his name as Moreno was bemoaning that he went to the march, that it was a fiasco, that perhaps as an opposition "we should draw the conclusion that the time to oppose Chavez had passed and that we should wait for a while" or some such nonsense. El Ciudadano let the guy finish his call as he always do as long as no insults are uttered. A few minutes alter another caller, mentioning that he lived in Cuba in the early 60ies. And then added that it was exactly what Castro used to do early in his regime when there was still some sembant of opposition: he would infiltrate agents to bring in self doubt. Classical.
Posted by Daniel at 3:43 PM