Trekking down from Caracas

This fearless blogger, regardless of the difficulties, has decided to travel for business to the US. One would have never thought that a missing bridge would complicate thinks so much, and so fast. Thus, while Jorge holds the fort as the distinguished ghost blogger, I will indulge in some travel diary. Who knows, it might even come handy to any of our distinguished visitor from the Social Forum visiting.

The first consideration is that now traveling to the US might take more than 24 hours, certainly if you have a morning flight. That is, the old road to the Caracas shore (Carretera Vieja or “benemerita” as Zapata called it in El Nacional, 1) opens for vehicular traffic at 5 AM. At night only trucks are allowed, one day up, next day down, thus making any delivery from La Güaira a 48 hours affair, including FedEx I suppose.

Unfortunately the road frequently does not open at 5 AM: truck accidents that are difficult to clear due to the difficulties of a 300+ bends road will take care of that. Some days it might take 2 or 3 hours to finally open and thus if your flight is, say, at 11 AM, well, too bad. Since I am traveling on business, we decided to leave the day before and sleep in some cheap hotel, which rates have doubles since two weeks ago, though we were guaranteed that it was free of bed bugs. We entered the Old Road at around 4 PM, as it closes at 6 PM to unleash trucking. Though closing time depends on traffic. It took us 1 hour and 43 minutes just to travel from the road entry to its exit in Maiquetia. Rather good in fact, probably due to the late Sunday time we picked to travel. The highway normally could be done in less than 20 minutes. To this of course you must add your inner city trips at each end.

There are two clearly different segments. Leaving Caracas the road winds through a favella, slums, ranchos or whatever you may want to call them. Let just say that you certainly would not want to have a flat tire in that area, even with all the cops and soldiers frequently seen. The neighborhood that formed along that road had had a very bad reputation and the government basically had to militarize the road to allow a modicum of security for travelers. That is, chavismo implicitly acknowledged that, well, it was dangerous. Many business prefer to travel through the alternate option of Carayaca if their trucks are small enough. They go through it usually in convoys of a few trucks to guard each other. That trip lasts for at least 3 hours, at night.

Now, I have driven through different bad neighborhoods of Venezuela 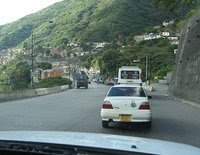 and this one was not worse than other I saw. Oh, sure enough it is bad and scary alright. But in a beautiful afternoon the “tourist” that I am anywhere could not help himself from taking a few shots. That it was a permanent stop and go for the first hour of the trip did help (click for larger pictures). This is conveyed in the first picture which allows you a glimpse of the long line ahead, and a military truck on the left side that is supposed to reassure us. It did not once I passed them trying to pick up some local girls. By the way, that particular shot is probably the widest the road ever gets, and the longest straight line.

The road must have been gorgeous when brand new. 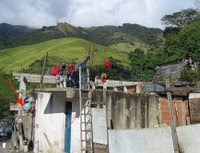 Probably even until the very early 60 ies when the slums were barely touching that area. The next view gives you an idea of the mountain vistas once enjoyed and the new foreground that you can peruse in, and I mean inside the house, as your car is stopped in front of dwelling built directly on the road. Note in this picture that there is a satellite dish, Direct TV for the inquiring minds, indicated by the red arrow.

But satellite dishes were quite a frequent sight! Even if sometimes the satellite dish seemed like the sturdiest item of the shelter. This other view gives you more detail as to the construction directly on the curb, a cheap zinc roof, BUT iron bars at the windows and the door and a satellite dish. No wonder Chavez is rumored to try to find ways to control cable and satellite TV: next right is the proof that people at all social levels are not afraid to pay good money to escape cadenas! (2)

Another advantage of the old road is that you get a clear understanding on how the viaduct eventually met its end. And how Caracas has grown wildly, out of any planning. Sure enough, Chavez cannot be blamed for that chaotic construction, but he can be blamed for not ha

ving done much to stem the growth, amen of reversing it. The following pic shows a neighborhood that has collapsed above the highway. I do not know whether it has fallen naturally, or if it is already the crews that have been sent to remove people and remove the danger (it might be the famous Nueva Esparta area but I cannot check on that from here). The reader can imagine easily that such a neighborhood, without drains, has all of its sewage slowly but surely seeping into the ground, increasing its weight and its “mobility”. Put that on top of a natural fault undetected at the time, and you lose the viaduct. On the bottom left corner you can see edge of the highway, barely a few hundred yards from the bridge.

It is to be noted that this problem has been decried since I can remember, that slums allowed to grow so close of such a main highway could only bring trouble some day. Indeed, it did, and it was diagnosed already in the early 80ies! Even if earlier some Cassandra were complaining of the increasing risks that could come from people living so close, risks for the drivers as well as for the inhabitants.

Eventually after about an hour we reached “Plan de Manzano”. I believe that this used to be one of the very few flat areas on that road. It probably had always some “conuqueros” (3) living there and might have even been the seat of some small hacienda or a meeting point. Well, it has become a small town of sorts, the example on how eventually slums become glorified Kasbas. You could probably stop for a drink there in a normal day and not feel like you will be robbed silly.

After Plan de Manzano the road starts slowly winding its way down. It is very high above the finished highway which looks far away, and strangely empty of any vehicle. It is also a rather beautiful road, and that afternoon the mists from the sea were coming up, creating an unusual and bucolic freshness to the air. I am actually looking forward a trip with clear skies, though there are very few and rare spots where one could stop and admire the scenery: the road is that narrow. It is also basically empty of constructions, Plan de Manzano being as far as the city seems to reach.

As a child I had traveled that road once, my parents inquisitive and “perpetual tourist” wanted to see it again even though the new spectacular highway was available. I did not remember anything from then, except that I was quite taken with motion sickness. But perhaps it is as well. No reference point might make the heart a little bit less sadder at witnessing my country go down the drain faster, and faster even if car traffic is down to a crawl.

1) The old road (Carretera Vieja) to La Güaira was hailed in its time as a big advance from the Colonial Times treck. That road was build under Juan Vicente Gomez, the longest serving dictator of Venezuelan history, Por Ahora. He had himself nicknamed “El Benemerito”, (the blessed one ?). In a great cartoon that Jorge might have the good idea to send me so I can post it here, Gomez complains that the road should be renamed “la Benemerita” instead of Carretera Vieja, since we are so blessed to have that as an escape route.

2)Cadenas: the power that Chavez has to comandeer ALL OF VENEZUELAN MEDIA, TV and radio, for as long as he wishes to pass his speeches or propaganda. Only cable TV escapes sicne the foreign signal cannot be cut. But at least through the "gag law" chavismo forces cable providers to pass governmental propaganda during scheduled intermissions!

3) Conuqueros: traditional slash and burn peasants.
Posted by Daniel at 5:18 AM