Today Weil in Tal cual had the following cartoon. 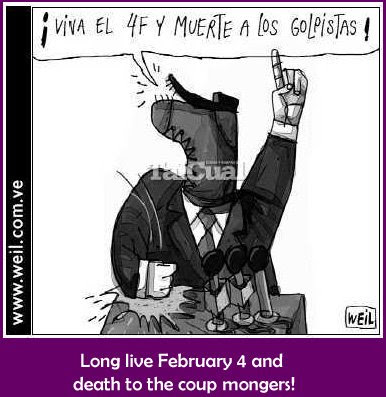 Weil has started drawing Chavez with a suit but with a head like a military boot. The allusion is, of course, one that more and more Venezuelan share: we are under a military regime that uses a civilian drag. Any serious observer in Venezuela would notice the amount of soldiers in positions of importance in the public administration. Wherever there are important decisions to be made, there is a military gatekeeper. The military of Veenzuela have reached power again without needing to make a coup. And they are now acting as under a military regime: their word cannot be challenged.

Today's cartoon was in allusion to the speeches of recent days where Chavez started attacking anyone that opposes him as either a coup monger or a lackey of the Empire, forgetting conveniently that his own coup of 1992 was infinitely worse than the one that lasted for a full day in April 2002. Deaths and damage to the country included.

But this cartoon goes further, it shows that Chavez through 2006 will crush anyone that will stand on his way to reelection, and without legal excuses if needed.

Well, Weil could not have guessed that this very same day his cartoon would be vindicated.

The general prosecutor office has announced today that it will seek a 16 year jail term for Maria Corina Machado and her associates in SUMATE; she is the formal head of SUMATE (in English here). What is worse, the prosecutor wants Machado and her associates to be in jail during their trial. This is in open contempt of a High Court ruling of last year which unambiguously stated that they should be tried in liberty. Apparently the prosecution office has received the order to put the directors of SUMATE in jail A.S.A.P. and might be defying the high court. We anticipate the high court to go along and pretend not be be challenged.

The consequent reader of this blog knows very well what this really mean: as the ground is shifting under Chavez, this one does not want to risk anything. If the opposition must abstain, so be it, but SUMATE must be shut down as it is the organization that will expose all the misery, perversity and illegality of the Venezuelan Electoral System.

This will be followed closely in the blog dedicated to SUMATE which I have set up long ago and which can be easily reactivated now. This blog by the way will include several valuable co-bloggers to keep a close watch on the events.

But I want to leave with an important reflection, I think. Chavismo believes that by jailing SUMATE it might silence this one and the opposition. This is silly. This reflects their own mind set where they all depend from Chavez, the bringer of all life. In their totalitarian-proto-fascist ways they assume that Machado is some unique leader of the opposition, Chavez like since she is received by Bush, for example. They are in for a rude awakening as jailing Machado will be the first major mistake of Chavez reelection bid. There is no better way to propel new leaders to fight Chavez than jail Maria Corina. Remember: you read it here first.
Posted by Daniel at 1:21 AM