The baseball Caracas team, Leones, just won the Caribbean baseball series. Translation: they are arguably the second best team in the world after the US top ones (a world cup coming soon might decide the best country, not the best league team). 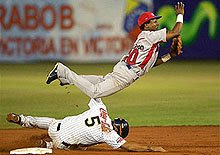 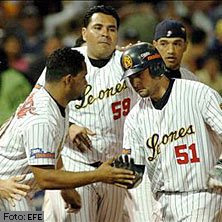 Now, the interesting detail there is that Cisneros, the richest man in Venezuela (Forbes) and an ennemy now in truce, owns the Leones whereas chavismo has been trying to find ways to own their rivals, the Magallanes of Valencia since it is the team that Chavez roots for. Or so I understand. Besides chavismo has even been trying to find ways to remove the lion as the Caracas symbol. You know, they are rewriting history...

Just remember that I am a soccer person, but the racket in San Felipe streets made me write this post waiting for the partying to go down so I can sleep. After more than a decade, baseball crazed Venezuelans are delirious to see the trophy back at home. Even some "magallaneros"! And heck, I am a Pastora/Red Sox guy, but Caracas is my native town and I am happy tonight. I do not not care for Magallanes.

Ah! If it could be an omen!

As all Venezuelan TV where announcing ecstatically the result of the game and the fact that Venezuela made it with a clean sweep, not loosing a single game, with enough cliff hangers, the only channel that was silent was the official propaganda channel VTV. It seems that the 24/24, 7/7, 365/365 TV consecrated to magnifying the pseudo revolution at tax payer expense has reached such intensity in its justificatory aims, its propaganda and adulatory mentality, that they could not interrupt even for a few minutes the vitriolic, bitter and resentful program called La Hojilla which stands as their comedy hour. In fact last night I watched them for a couple of minutes astounded that they were not showing the result of VENEZUELA’S MAIN PASSION. During these two minutes I observed how they tried to justify the spending of the buses and other for the Saturday march (at least they admit that public money was used to promote a chavista political activity, we should be happy for that I suppose). But you know how they justified that? By asking who paid for the bullets of April 11 2002 from the Metropolitana. Conveniently forgetting to ask who paid the bullets for Llaguno bridge. VTV and chavismo are reaching such a state of psychotic dissociation that you start wondering….
Posted by Daniel at 5:01 AM