If there is an area that has experimented rapid growth in Venezuela is the area of creative accounting, be it from the private sector to escape the repressive SENIAT tax avenger, to the government trying to hide the monies stolen through corruption, or lost through its sheer inefficiency.

A new bright example of this sophisticated trend that has even allowed PDVSA to skip a SEC reckoning (though the pressure must be so high that they have decided to bail out of the SEC) came with yesterday’s unemployment numbers.

The INE admits that from December 2005 to January 2006 unemployment has grown by a stupendous 4 %. So what do they do, they decided to admit the effect on this number is due to the “buhonero” effect, that is seasonal employment which soars at holiday time before sending all of them back to the streets in January.

This is true, of course. But it is hypocritical for the INE to use now the “underemployment figures” as an excuse for bad numbers in January when 2 months ago the INE head dodged any question on the real employment numbers just when underemployment was used as a makeup to drop dramatically the “employment rate” of Venezuela. That is, anyone that has an “activity”, even a two hours street corner vendor of empanadas at lunch time, is considered as “employed”. Never mind that this person does not even get minimal wage and even less social security. May the Misiones provide! Which they do as those in any educational plan, in particular the “mision vuelvan caras”, are taken of the rolls of unemployment even as they receive a meager stipend for doing almost nothing of their involuntary free time.

However this time there is a new twist: the INE, desperate to hide the chavismo bad numbers, specially after the INE head, Eljuri, promised to drop below 10% by December 2005 (he did) and thus justly concerned that Chavez might lash back at him (shoot the messenger, a favorite in those grounds), has decided to highlight these January numbers by comparing them to last January. Benefiting for an undeniable, if clay footed, growth, we thus finally get a glimpse of the real jobless rate drop for 2005: 2.6 % in one year (if we can trust it, but why not?) So let’s us see, we get supposedly a 9+ % GDP growth for only a 2+% jobless drop? I refuse to do the math as to how long it will take us to bring 50% of the country to the “quince y último”, that is, to regular pay check and social security enrollment.

And get this! To try not to look too much as backpedaling on previous declarations, Eljuri calls this January to January comparison as reflecting “quality improvement of the type of jobs” meaning that from going to street corner vendor of empanadas to janitor in that same street corner would be a “quality improvement”. Well, it probably is if you put the vendor on the payroll and get Social Security registration, but that is not often the case. I would rather call this a sub-conscious lapse where Eljuri, slipping in the bureaucrat mold of proto-totalitarian regimes, Orwell style, starts believing that it is just fine to equate street vendor jobs as almost equal in “quality” to his underling bureaucratic jobs under AC at the INE office. I suggest for Eljuri to manage a “buhonero” stand for a couple of days and stop talking shit. It seems that even this opposition blogger has a higher regard to buhoneros and other street vendors than Eljuri who is so obsequiously worried about his and his master glory.

But this is nothing new for the dedicated readers of this blog who have got an eyeful here, here and here of what these INE numbers really mean.

This blogger is leaving for a few days of a well deserved break. He has hired brilliantissime Jorge Arena to try to put a post but he heard that Jorge is also moonlighting at the Miguel sweat shop. We’ll see. 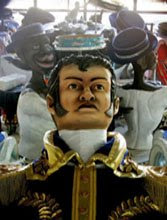 Meanwhile as a parting post card, and since it is Carnival, I would like to post this pic of the Bolivar figure built at PDVSA expense by the Samba school Vila Isabel to preside their parade. Rumor has that PDVSA will also foot the bill for an expensive lodge at the Sambodrome where Chavez might or might not show up. I wonder what the street vendors of Vargas might think of that as their meager income will be cut shorter by the collapsed bridge and dearth of tourists in Vargas during Carnival. Now, about this pic, am I the only to think that it seems like a strange cross between a pic of Chavez and the iconography of Bolivar (which, at any rate, does not look like this silly and expensive puppet)?

Meanwhile I will be for a few days at least one hour from the closest slowest, internet dial-up thing. A good break by itself. If you decide to post comments any way, be patient, they might take a day or two to come up.
Posted by Daniel at 4:01 PM