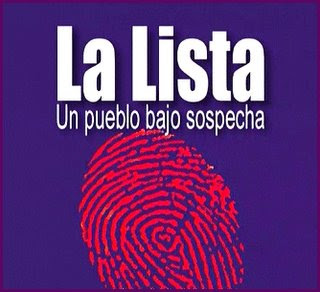 Writing a full review of it is not necessary, besides, Miguel, who I met there, already has reported on the video per se. I would just want to share with the readers the emotions that I experienced during the screening, and try to discuss which are some of the very main points that the video so beautifully and convincingly addresses.

La Lista as a heroic tale, and an indictment of the Chavez regime

The most important contribution of the video is to show that the Tascon List was not an isolated event, a crazy idea that came up with the now infamous deputy Tascon. No. It is clear that Chavez knew all along that the infamous list was created, what it was designed for, how it was used, and when its main purpose was duly served. And it is fair to say that to this day the list is still in use and that Chavez knows about it and that he lets it happen. 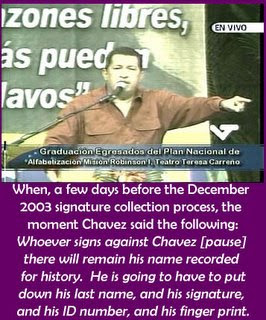 This is enough for one day to try him and to send him to jail as no sitting president of a democratic country should EVER allow the creation of an instrument whose sole aim is to create an apartheid based on political differences.

For the reader that comes in late, the Tascon list was elaborated on the basis of the Venezuelan constitutional right that we can request a petition or law submitted to referendum, or call for a Recall Election for any elected public servant. This is achived by gathering a certain amount of signatures equal to a specific percentage of the electoral rolls of Venezuela, that percentage varying according to the type of referendum requested. 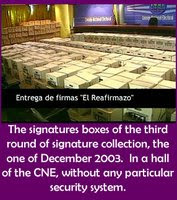 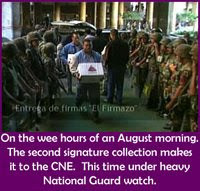 
Normally, once those signatures are gathered they should be held in strict confidentiality, scrutinized according to recognized statistical methods as to their validity and then destroyed so that no record remains. Not only this did not happen in the Recall Referendum process against Chavez, 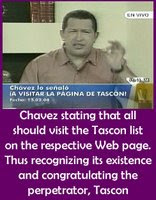 but ALL the names of the signatories, even those whose signatures were not recognized as valid, found their way into the infamous Tascon list which was then used to put undue pressure on all public servants, and their relatives EVEN IF THEY DID NOT SIGN FOR THE REFERENDUM. It also created all sorts of legal hardships from denial of loans to refusal to emit passports for those civilians that had nothing to do with government business but still found that government mandatory services were denied to them because they signed.

The severity of the application, from mere denials and stigmatization, to outright firing, depended on the public servant in charge and his desire to please in upper echelons. Some ministries and institutions were much more touched than others. One of the worst offenders has been PDVSA where if any or your close relatives signed against 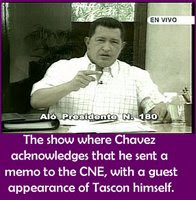 Chavez you are banned from job application, or subcontracting. Entering into PDVSA this day is a long screening and once inside you are subject to dismisal if suddenly you are found associated with "undesirable activities" or something like that. A problem in Venezuela as PDVSA is one of the main employers and a big contracting agency (contractors and their personnel are also subjected to such abuses). I know personally of three cases. The movie will acquaint you with many other such cases, from PDVSA, FOGADE and more. You will see and hear all of these people tell you their story, from the lucid ones who have decided to follow the paths of justice come what may, to those who have become almost wrecks of their former selves. Quite a contrast with the clips from public "servants" and their lies. An abject lesson for all of us.

La Lista does a good job, an excellent job, to remind us of all of these high moments during the signature collection process. It also does a particularly fantastic job in finding the quotes in from the different videos of Chavez himself. There he gives diverse 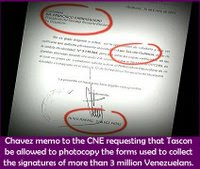 announcements showing his knowledge of the existence and of the use of the segregation list. Put together, the evidence cannot be denied and any democrat must shiver at the idea of what else would this president do in the future if he allowed such a horror to hold onto power at any cost.

And one cannot fail to add that to the threat of the Tascon List, outright violence was offered by supporters of Chavez such as Lina Ron below. They knew who you were and where you lived, and that was scary alright at the time to decide to go and sign anyway. 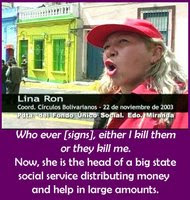 Lina Ron, by the way, was one of the main organizers of the violence that was present at the very first time the opposition tried to submit a consultative referendum, promptly annuled by the high court. Below the arrival of these boxes with tear gas clad carriers. Those images were carried in all minds one year later when we had to go and stamp our signatures. 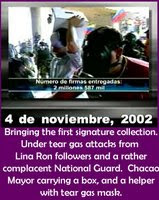 The most famous violations of the elemental discourse of political responsibility came in December 2003, when after havi ng agreed on 5 rules under which a signature could be rejected, the CNE came up with 34 new rules, bringing the total to 39 (according to La Lista) and thus managed to annul enough signatures to force yet a 4th gathering of signatures, called “El Reparo”. But that was not all. When the famous Reparo came, we assisted at the first large scale application of the Tascon list. We also saw an additional vexation as people were forced to go back and confirm their original signature while those whose signatures were valid were allowed to withdraw their names. BUT NO ONE WAS ALLOWED TO ADD his or her name. All was deliberately designed to coerce people into not signing again, into being scared of losing their job if they did not withdraw their signature. Yet the only thing that chavismo achieved was to highlight the heroism of the opposition who against all of the state apparatus managed to get MORE than the 20% required.

Below the pictures of a few of the people who tried to either justify the use of the list or tried to pretend it was not a big deal. 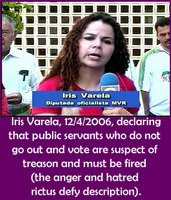 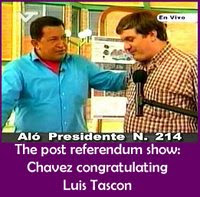 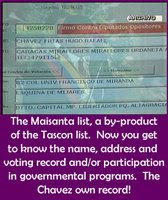 Tascon list was transmuted into the Maisanta program which now lists ALL of Venezuelan electors. Now the government through Maisanta can decide, according to the voting pattern, who is a “real” patriot and who is a traitor. We are now past the apartheid stage of the Tascon list (though this novel apartheid will never go away as some who did not go to Reparo under pressure still got problems at work). Now all Venezuelans are listed and all Venezuelans are under scrutiny whenever they seek to exert any of their constitutional rights or demand the services expected from the state. The Maisanta list tunes up the voting pattern by listing any pro-Chavez social program that a given elector is enrolled in.

Chavez can mock us by asking/announcing that the Tascon list "be buried". But no one has been punished for its use. And the Maisanta is rolling freely around. Yet another one of Chavez lies.

The Maisanta list is so abject that it was even mentioned clearly in the European Union observation mission for the December election, as one of the causes for the high abstention, provoking the ire of Chavez who was caught pants down.

Many will result, but the first result, unintended by the government, was the natural loss of confidence by the electors that their vote was still secret. Since the Tascon list appeared, abstention rates have been climbing fast: after all it is the CNE that released to Tascon the names of those who signed against Chavez.

Another graver result is that now all the constitutional articles on the so vaunted “participatory democracy” are now void. Who will now initiate a referendum process if they think that their signature might get used against them if their side does not win the contest? This great advance of the 1999 constitution, the only one that this writer admired from the start, has been shot down as soon as Chavez realized that it was a two edged sword for him. He is safe now in the knowledge that no one will ever try again a referendum against him or any of his legal programs. 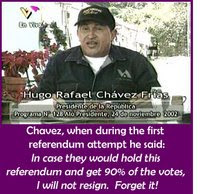 even more graver result is that the ongoing, and now maybe never-ending Venezuelan political crisis, can only be solved two ways: either a new constitutional assembly (and this must be called through a referendum, thus limiting the odds in the present set up) or the demise of Chavez, be it from its natural death or more likely through violent means, probably coming from his own followers as the list turns against some of them, as it will undoubtedly do some day. This is the dynamic of the such regimes through history: they remain on top through constant purges to scare into submission their own followers.

The emotions raised by the documentary

Well, the only thing I can say is that to watch summarized in not even one hour all the ordeals that as a citizen I had to go through from 2002 to 2004 was an intense experience. How could we put up, as a people, with such shit? All that tenacity, dedication, hope, risk and daring, heroism, for nothing? It was indeed an emotional moment for me, and I venture to say for all in the attendance.

Another sad constatation was that we started to forget all of it. There were so many moments when I realized that "I forgot that one!" And the further realization that this is exactly what the regime does, push away a scandal with a new one.

After the projection, one was left with more questions than answers, but also with the resolve to help in any possible way that such a horror stops, and never occurs again in Venezuela.

The documentary La Lista, Un pueblo bajo sospecha (The List, a people under close watch) can be obtained through the page Web of Ciudadania Activa, the NGO sponsoring it. Their web page is: www.ciudadaniaactiva.org. If you have trouble getting it you can write me and I might be able to help up to a point. It costs only 20 000 Bs., about 8 dollars at the street rate (I doubt that CADIVI will give you dollars for that video). I assume that you must also pay for shipping.

Translations into English and French are ongoing (whith yours truly involved). Translations in other languages are under work too.

I strongly recommend that you get one copy and diffuse it as much as possible.

And next time you find an asshole who still thinks that “The revolution will not be televised” ask them to watch that video. Actually offer that person to watch both videos together and see what happens.

1) I apologize for the not so great lay out as it has already been pointed out to me. But blogger does not allow me to do the lay out I wanted and I had to settle for this not too great combination. Suggestions as as to how improve this blogger set up are welcome.
Posted by Daniel at 5:40 AM