A commemoration for the 70 000 that died under Chavez

Acuestate por la Vida,
commemorating the 70 000 deaths by violence in Venezuela in the last 6 years. 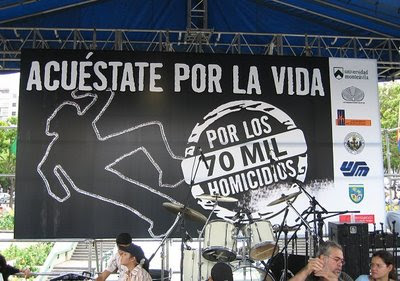 Since Hugo Chavez has become president in 1998, the toll of violent death from crime has been multiplied by three. Violent crime has become the number one cause of death for young men between 15 and 25 year old. The weekend roll of death reads more like the death toll of a civil war than what 'normal' crime would read. Caracas has become the most violent capital of the Americas. The government seems helpless, bereft of ideas, or, worse, welcoming such a disaster that distracts people from the other woes that we suffer at the hand of the regime.

The recent sequential deaths of Sindoni, the Faddoul kids and their driver Rivas, and the journalist Aguirre that was covering the national grief seem to have been too much. A group of students from many universities have organized a "lay down" manifestation. "Acuestate Por La Vida" = Lay Down for Life.

Today from Chacao to Parque del Este, people were invited to come, draw the outline of their bodies on the pavement, and at noon to lay on the street, on the selected spot, for ten minutes, to commemorate, reflect, pray for the 70 000 victims of violence in Venezuela during the recent years.

I was there. I did not lay down as I was too busy taking pictures of this memorable and truly emotional day. I have tried to reduce the size of the pictures so as not to make the page too heavy to download. All pics can be clicked to get a larger version. Comments as needed.

Waiting for the lay down time

The general view between Parque del Este and Plaza Altamira as people gathered and waited.

I was allowed to climb on the stand reserved for the announcements, the media and the band that would play later. How did I manage that? I said that I was Daniel Duquenal from this blog and voilà! A most gratifying moment!

The view is from the stand toward Chacao (and the first picture above to introduce the post is of course taken from inside the stand). 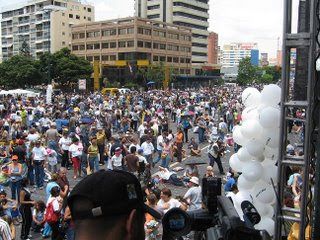 The ambiance in the stand as the media gets ready. The speaker giving instructions on the microphone seems tiny and irrelevant :) In the background one of the famous art deco like buildings of Caracas from the 50ies, with a great mural, that will be probably lost to real estate greed. 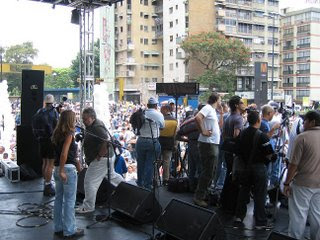 A view of the grand stand with, in red, some doomsayer that never is missing from such events. 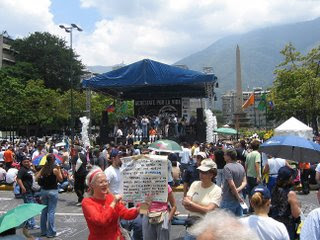 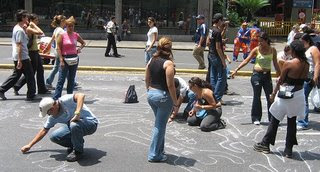 Picking up a site, drawing up the shape, writing down the name.

Another couple of general views. 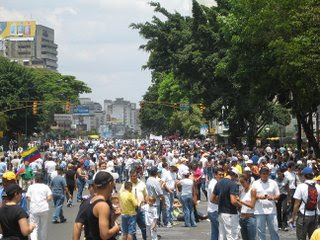 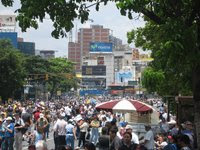 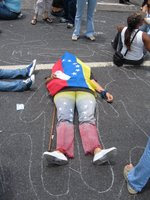 Laying down in the Francisco de Miranda

The area went from Parque Cristal to the Chacao entrance, almost the equivalent of two metro segments, about 8 large street blocks of the Francisco de Miranda avenue. The starting time, promised for 11 something was eventually at noon.

The tow pictures next are of the group of people at the La Castellana crossing, a couple of minutes before they laid down and as the commemoration started. 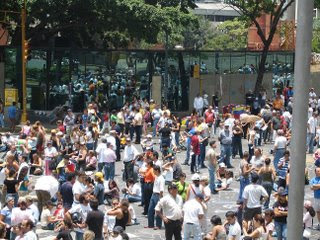 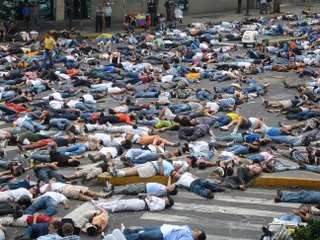 The view toward Chacao. The objective was to have 70 000 people to lay down. I do not know if they reached it, but definitely the visualization of this picture alone is harrowing. 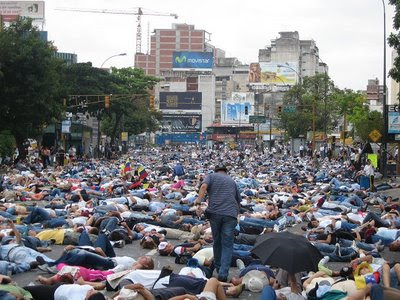 At one of Altamira Metro exits. 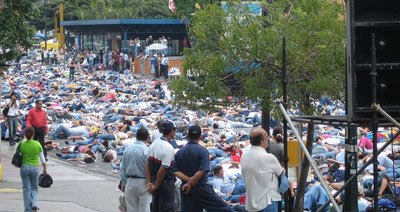 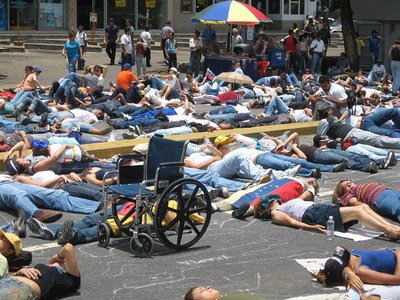 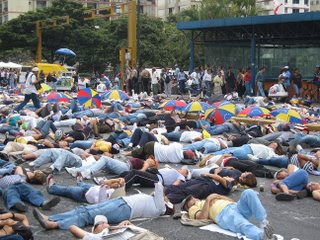 Remembering the Faddoul brothers with a home made poster. 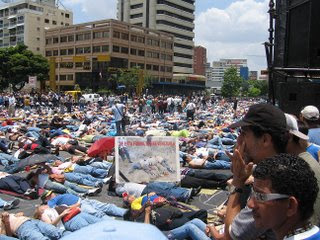 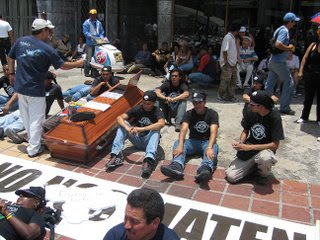 The crowds from Parque Cristal stand up and move towards Plaza Altamira. 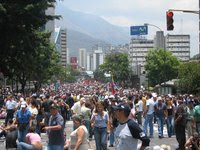 Sure enough, the helicopters of the government where monitoring the concentration. We got two visits, the first one by a red helicopter at noon. This one came at the very end, when most people had left Parque Cristal to go to Plaza Altamira for the concert, or simply home. I am pretty sure that if the state official propaganda venue, VTV, shows anything, it will be the images from that moment with some caption to the effect of implying that no body showed up. Of course NO PRIVATE helicopter has been allowed over Caracas since 2002 to film ANY opposition activity, to make sure that we never know the full aerial view. 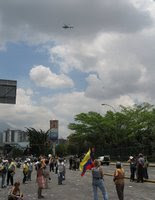 PS: I have taken a short video that I will try to post elsewhere. Keep tuned.

PS2: I have just received these two pictures sent to me by a faithful reader. The first one is the infamous leaflet circulated by chavistas. The other one is a view from inside Chacao. I did not realize that the lay down reached that far, at least 12 blocks total of the Miranda Avenue and MORE than two Metro segments! The most successful public demonstration since 2004! The text of the absolutley tasteless leaflet: Lay down for security while we... have 10 millions [votes] to push down your gullet [the Chavez extremely vulgar campaign theme]
For a second I thought it might have actually been printed by the opposition, but then again, it is so tasteless in chavista style that I would bet on it coming from chavismo crassest levels, such as the Barreto crowd. 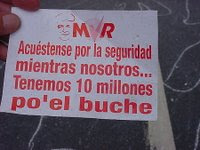 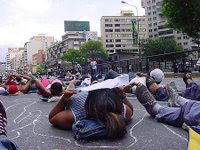