Driving through Caracas streets: slogans and a reality check

Last week this blogger was AWOL, which did not meant that he was forgetting all about this blog. One holiday activity I had was to take pictures while driving of the revolutionary posters which visually assault us all the time. At the end I contrast them with some pictures that show the reality of Venezuela behind all of the pretty slogans that the bolibanana revolution would like us to believe. All pictures taken between April 15 and 18. All in Caracas. Comments on each one as needed.

One thing that is now routine is for public buildings have a certain air of "liberated", when not used for gross state propaganda. 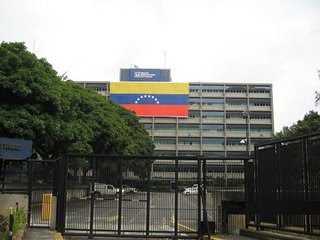 This used to be a PDVSA building in La Floresta, previously, if memory serves me well, the Mobil headquarters in pre oil nationalization in 1974 (yes, Chavez DID NOT nationalize oil, he just grabbed it for his own profit, in fact privatizing it). Now it is some technical school that is real estate over endowed (the sale price of this high market real estate could pay for at least a couple of fully equipped technical schools elsewhere in Venezuela, where the need is much greater). Observe the flag. The huge and expensive flag has ALREADY the 8th star on it, less than a month after the new 8th star has been added to it. There is always money for such expenditures. 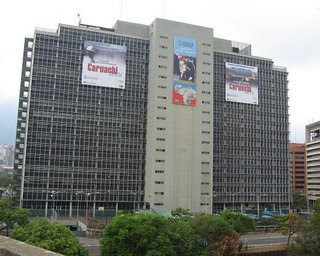 This is an example of building use for propaganda set up. This one used to be the Shell one. It became one of the centers of opposition rallying during the PDVSA strikes of 2002. Chavez exerted his rueful revenge by making it a military university of sorts. And the billboard of choice for his antics in the face of an epicenter of opposition. Below a magnification of the poster on Chavez, hugging a child while promising that said university network of campuses will hold 200 000 students. Note that the use of the child with a red beret in propaganda is against the law. All his authoritarian role models would be proud of such a poster.

But while this goes on, what about other established monuments? While ex PDVSA buildings are luxuriously kept and dedicated preferably to students that support the regime, other monuments and buildings that do not enjoy the favor of the revolutionary fervor sink in utter decrepitude. For example below we have the pedestal of the Columbus monument close to Plaza Venezuela which since the statue was torn down over a year ago has languished as one of the major eye sore of Caracas. Chavismo does not have even the decency to finish to destroy it and leaves it as yet another image of what Milagros Socorro calls "post nuclear scenery of downtown Caracas". Indeed, visiting downtown Caracas these days is a filthy and creepy experience. 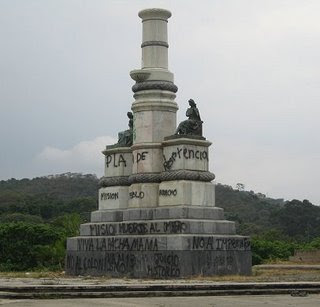 There is a lot of new "decorations" in Caracas streets. Now we are visually aggressed by a constant barrage of state propaganda, more than often featuring the great leader, alone or accompanied by the local potentate that wants to make sure to figure close to the beloved leader.

There is first and foremost the "heroic type" with Chavez single-handedly directing the country's development.

Then there is the "popular" one where Chavez is sure to appear with "real" Venezuelans, usually dressed in red, and Chavez as the benevolent benefactor. 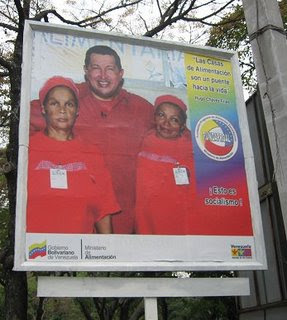 Since we already did the "baby and Chavez" thing we can move on to the outright slogans. This first one is at the door of "La Estancia". This venerable hacienda occupies a prime real estate spot in Caracas. Through a preservation campaign it was bought by PDVSA in the 90ies, restored and preserved, with its park, as a glorious green oasis of culture exhibits in the middle of bustling Caracas. After the 2002 strike, the staff was mostly fired, even the one at the concession stand. Eventually it was reopened in 2004 but now we do have "bolivarian" exposition of the talents of "the people", quite often without any regard for aesthetical value as long as the bolivarian message comes across, bluntly as a sledge hammer if necessary. In addition, at the entry of the shrine we find the following poster which translates as: "Our free of charge programming represents the planting of oil in culture" achieving thus the combination of a naked lie (La Estancia was always free entry) and stealing of the famous Uslar Prieti words. Orwell would have it so easy! 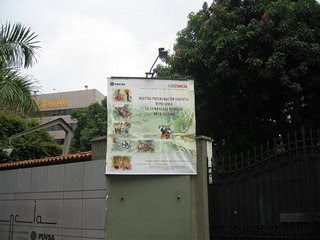 And my favorite one: the anti US slogan, destined to whip up the justified anger of the masses against uncle Sam. Translation "there are two super powers today, one is the US and the other one is you" (with only 7 stars). Castro meets self esteem coaches.

Not to forget the ones to rewrite recent history. This one illustrate the slow building of April 13 2002 into a new National Holiday. This "day of dignity" wants us to believe that millions went out to the streets to restore Chavez that day. The truth is that only a few thousands in the Western part of Caracas protested, many of them taking advantage of the unrest that day to loot a few hundred stores. Very far from the hundred of thousand that marched on April 11. Of course Chavez wants to erase any perception that he came back to power because the army said so, pulling out the crowds illusions, and certainly not because he was clever enough to regain office.

The reality behind the slogans

These slogans of a brave new world cannot unfortunately hide the crude fact: homeless people, in terrible indigency, in the street of Caracas, are more numerous than ever, to the point of literally nesting wherever they can, even under highway bridges if necessary. Most pictures taken from a car window, crude pictures of this awful reality that no propaganda can erase for those who are willing to open their eyes. 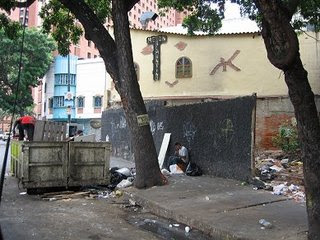 Three indigents scavenging in a dumpster on Solano avenue,
smack in the center of Caracas. Observe the surrounding trash. 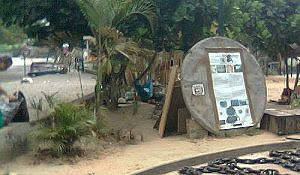 On Plaza Morelos itself, the main seat of Caracas Museums, native Americans
from the Delta area have set camp. You can see the traditional hammock, even
if in cheap nylon blue, all ironically set behind an awful "revolutionary"
monument to denounce some historical wrong, probably against
the very same natives that are left to rot everywhere in Caracas, Chavez
chest hitting notwithstanding.

Another view of the same group, from a different angle, far enough for respect.
Blue hammock on the left, cornered between Plaza Morelos and Avenida Libertador. 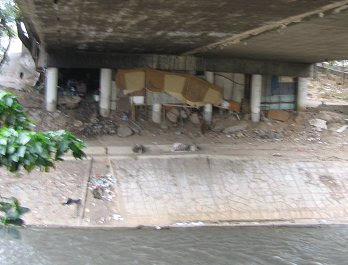 This picture, slightly blurred for the car motion, is taken while going under
a Caracas bridge, along the Guaïre river which has become an open air gigantic sewer.
A group of indigents have build a cardboard set up where to huddle.
Probably a couple of dozen people "reside" there.

And to conclude perhaps the most pathetic one of them all. I only noticed that one
because I was in traffic jam and I had the leisure to observe. What you see in that little
corner is a homeless person that has set up camp using
some plastic cover and an broken umbrella. This, amazingly, is located in El Paraiso area,
a couple of hundred yards of the well appointed Nazional Guard historical seat.
Caracas on its way to Calcutta, under Chavez.