I was writing the earlier post this morning while having my breakfast, not having watched the news (I have stopped long ago watching TV in the morning, too stressing before a day's work).

One I had posted it, I learned of the horrible fate of the Faddoul brothers. Over a month ago, through a police check point, apparently from rogue AND serving Metropolitana Police from Caracas, the three brothers and their driver where kidnapped on the way to school. Last night their bodies were found, bullet in head, execution style.

I cannot bring myself to read the details or inquire further.

Another reader sends me the following propaganda poster in El Nacional, about the "popular security" programs of Barreto. I think it is abject to publish such an item after not only the horrible death of the Faddoul brothers (think about it, a family deprived of their three children in the most horrible circumstances), but about the murder of Sindoni, also in execution style, also through a fake police check point, or the students executed by the DISIP a few months ago, or the resurgent "exterminio" groups in Portuguesa. Security forces in Venezuela have become terrorist groups that the government is unable, or unwilling, to control, too busy in looting the country or looking for ways to secure their hold onto office. In this insecurity, by the way, both rich and poor suffer as the criminality in poor areas is not even reported except in the week end statistics which read like an Iraq war report. Thus proceeds the deliquescence of Venezuela. 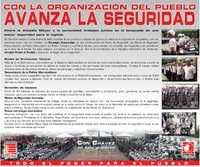