Life style of the nouveau riche and infamous

Readers send stuff and on occasion the stuff is worth publishing. 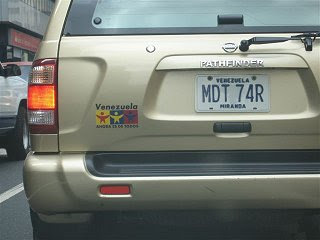 government: "now Venezuela belongs to us". I will pass on the necessary correction that Venezuela belongs to 15% as of December 2005 (look on the right side of this blog). I will limit myself to observe that this car is considered luxury car in Venezuela and is worth 293 minimal monthly wages, insurance included but without options. That is, the bolivarian worker in a mision, assuming he gets at least minimum wage, would have to save all of its paychecks for 25 years just to afford the basic version of the car (not to mention the taxes that go along).

Ah! It is good to see that some do have access to the good life. Luis Velazquez Alvaray and Jesse Chacon were discussing this lately. I wonder how did the parking lot of the CAEZ in Barinas looked like before the corruption scandal broke. And there are more, much more on the way.

How to keep people focused

No matter how the high bananas of the bolibananarian revolution live, one must make sure that the 15% who vote remain on track. One way to do that, besides forcing them to listen to 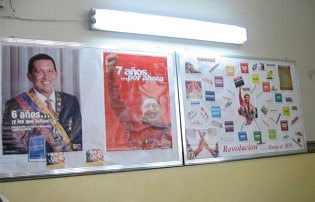 speeches when they get their misiones benefits (when they do get them), is to litter the public administration with "suggestive" posters. As the pic next shows well, suggestion is now blatant. This bulletinboard reaches several objectives, from left to right (from the ONIDEX of Los Teques, where people get their ID cards):

1) Glorify the president after 6 years in office, smiling, dignified, icon like. You could put it up in your house altar.
2) Remind folks of the fighter, in movement, in red, with the promise (or threat?) that 7 years are not enough.
3) Make sure to link the president to ALL the different Misiones, to etch in the brain of poor folks that Chavez IS the SOLE provider. That without him they will get nothing (is there a Mision Nissan Pathfinder?)

Of course, the intensity of these bulletin words vary between governmental offices depending on the local "commitment" to the bolivarian revolution (or rather its glorious leader). I have been subjected to this form of pressure, from the mere portrait of the president (normal), to the forced broadcast of the State Radio RNV (in the judicial tribunals!) to the TV set on the state TV, VTV, on loud, in the waiting room so you cannot even have a conversation. I have also seen billboards much flashier and crowded than this one but I was never in a position to take a pic, though as the campaign for the 10 million gets into high gear, it will be worthwhile taking the risk to click the shutter in public.