Chavez at the Vatican

Apparently, in an electoral year, Chavez thought that a brief foray into the city of Saint Peter might do him some good. It did not. And the rather discreet coverage of that foray (ABN has all but nothing on the matter, leaving it for MINCI and RNV) seems to indicate that chavistas are nto too sure how to use it. Not to mention that Globovison gives quite a different perspective, totally ignored in the pro government news propaganda system.

The news in fact is how the news is covered. 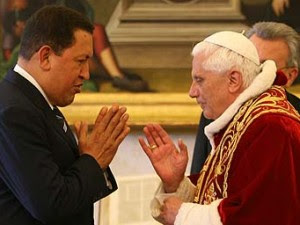 On the sate side we can red such things as the MINCI version telling us that the 35 minutes interview where filled with Chavez exposing the catalogue of Chavez Misiones to Benedict XVI. More "engaged" RNV cannot escape its idolatry of Chavez and writes the rather stunning sentence:

I do put it in Spanish first as the arrogant sycophancy of the Spanish text cannot be conveyed in the translation below (emphasis mine):

"The exchange of presents was also part of its reciprocity of opinions. The serigraph of the Libertador, Simon Bolivar, was the present granted by the national leader to his Holiness, who in turn gave him a Vatican coin collection"

Surely, the editor of RNV has been trained at Prensa Latina and Granma.....

The list of visitors that accompanied Chavez is a who's who of Venezuelan junketeers. It included truculent Barreto, Mousy Delsy Rodriguez (the sister of Jorge of the CNE) and Nicolas Maduro. Barreto is one of the biggest cynics of Venezuela. The now Caracas mayor has a past littered with racial, sexist, homophobic, anti religion epithets and one can only wonder what the heck he was doing in the Vatican. Maduro has been known to travel first class to India, during the last stretch of his 2006 electoral campaign. I pointed then that it showed he must have known that the results was preordained to be taking time off to visit Said Baba on its birthday. Said Baba and Benedict? As for Delsy Rodriguez, whatever is known of her is that she is of the bitchy type, making her brother look nicer and more diplomatic, certainly not the type of woman to be seen at church benches every Sunday (I actually know that from somebody who worked with her during her brief tenure at the Foreign office). I do not know whether Benedict XVI knew of the past of his visitors, but I am pretty sure he would have been nonplussed.

One interesting detail is that the official press uses the opportunity to launch yet a new round to convince people that Venezuela's new Cardianl, Urosa Savino, has been named by the Pope to please Chavez. RNV also uses the opportunity to announce that Chavez in his magnaminity has announced that "he will turn" the page on the past frayed relations between his adminsitration and the Venezuelan Church. 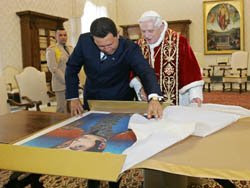 From the other side, it seems that the story comes from a whole different reunion, somewhere esle in space and time. Globovision actually reports the words of the Pope, lacking in every governmental publication that I have checked on Internet. According to Globovision the Pope pressed on the following issues: respect of the rights of the Catholics in Venezuela (could it be that he was aware that no real catholic was among Chavez' courtiers?); freedom to name the bishops that the Church sees fit to name (there is an outdated concordat that Chavez is willing to use on that matter); protest of the new education law and its anti spirituality bent; and of course, the usual pro life stand. I do not know about you, but I have the feeling that Benedict XV was not fooled for a minute by Delsy Rodriguez new found faith...

Globovision also reports that the Vatican coverage and pomposity was rather subdued, diminishing the photo Op moment that Chavez would have loved to carry home with him. It also reports that the talks between Cardinal Castillo Lara, fierce Chavez opponent, and the Pope where way longer than the 35 minutes of Chavez. And that last but not least, Benedict XV gave a written letter to Chavez of all of his opinions so as to make sure that Chavez would not distort them as he pleases once he is out of the Vatican. Nope, the Pope was not fooled and new exactly who he was dealing with. All of these of course absent of the pro Chavez media.... But present in the New York Times!

A note on the pics I chose. The first one with all the fake piety of Chavez comes from RNV. The second one, where Chavez appears as edging the Pope and where you can see one of his military aids in the background (in the Pope office? What the heck!...) comes from Globovision. As usual, pictures are worth thousands of words….


And of course Weil in Tal Cual yesterday has the best possible summary as to what Chavez really wanted to say to the Pope when he went to Rome. Priceless! A good cartoon is worth a thousand blogs :) 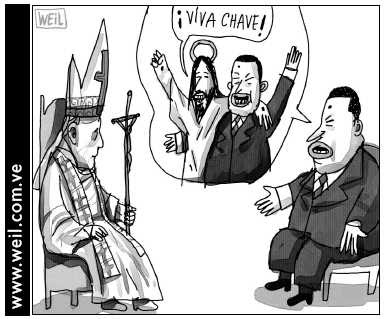