I must confess that I am greatly amused, and pleased by the way Chavez latest European foray is turning out. At the same time I can observe with satisfaction that certain of his moves are backfiring, such as the Vatican visit, while other moves are rather bright political maneuvers that are leaving European leaders in a state of deserved consternation. Let's follow step by step the journey.

The objective was to score some easy indulgences with the Pope and while at it, befriend the incoming left of center administration. As I related the Vatican visit did not turn out as expected. The Pope, who has been following the Venezuelan "question" for quite a while was not impressed, and certainly not fooled by Chavez. The Church has been battling the materialism of the pseudo-revolution for quite a while. Benedict XVI waited for Chavez with letter in hand, knowing full well that Chavez lives off evanescent words and even more fleeting promises. Chavez, tied by the letter had been very discreet on the matter. Then again the church has been around for quite a while and has survived worse threats than bolibananarism.

The agenda at the Italian Parliament turned out more favorably. A whole bunch of barely reconstructed communists were only too delighted to welcome Chavez. After all they are coming out from the Berlusconi failed administration under which they feared, with some justification, for the democratic future of Italy. They were wrong in that Berlusconi did lose the election after all, but more because he failed to deliver on his promises rather than from some innovative program from the recycled Prodi. 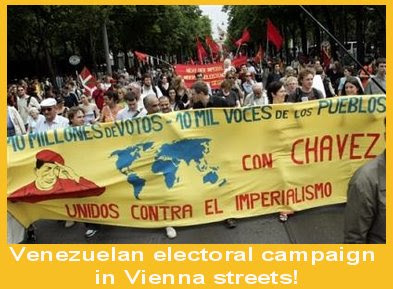 From the social activities of Rome, Chavez flew to Vienna where the European Union was holding a meeting with Latin America. The original idea was to impulse trade talks and create some form of free trade between both worlds, before the United States get it all fort itself. It would have been all fine and dandy except that now Chavez has decided that the only model for free trade is the one he is sponsoring with Castro: a quickly written nonsensical agreement where “solidarity” is more important than whether the signing countries do actually have something to offer each other. We are still wondering what will Bolivia, Cuba and Venezuela will trade between them. But I digress, and it is irrelevant anyway. The only reason for this ALBA is that it provides an excuse for Chavez to push to the left his former commercial partners. With the Bolivian nationalization (confiscation?) of its gas industry, Lula and Kirchener have suddenly waken up to what Chavez is really about: support for the Piqueteros and Sem Terra to force Kirchner and Lula respectively to veer to the left and align themselves with Chavez, not Venezuela aligning on Brazil. Amazingly Chavez seems to be reaching that goal, fat checkbook helping out as Toledo crudely but exactly asserted.

Just as it happened in the Mar del Plata summit of last year, just as it is happening in his tormented entry into the Mercosur, just as it happened when Chavez kicked out the Andean Community, his destructive tendencies reached Vienna with a great effect. And as it has become his strategy, Chavez arrives, sticks his tongue to his host and colleagues and hits the streets to "reach the real people". Venezuelan embassies have been working diligently. Sycophantic paid for journalists such as Le Monde Diplomatique staff have been “educating” the anti globalization masses and now we see that ill educated trooper become president enchanting the masses with long winding speeches that make no sense at all but somehow resonate well with the frustration of the century and the anguish that the US failures in the Middle East rising everywhere.

Chavez now takes very seriously his anti US speech. It seems that at any possible opportunity during his trip, whenever he is asked about cattle raising in Barinas he manages to excoriate the US for 10 minutes. When the next question is in oil production, we get a long speech on the end of capitalism. No matter what the question is, the answer is always the same: it is all the fault of Bush and capitalism. Rumor is that the Vienna guests and host were getting quite exasperated (not to mention that apparently Venezuela had the biggest delegation and the least constructive participation, as even Evo Morales tried more the dialogue thing than Chavez).

But the best was yet to come. As in Mar del Plata a “counter summit” was held. A perfect platform to criticize further the US while everybody else is working on constructive trade proposals. In addition this lead to some kind of rally to support Cuba and Venezuela. While the BBC Spanish section gave a rather sympathetic coverage to the circus in town, CNN showed us 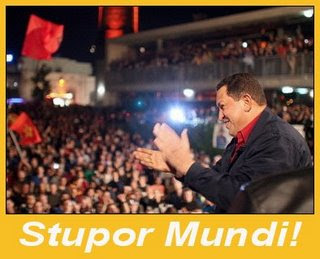 the footage of some Vienna square full of red flags and Che images, people chanting, Chavez uttering his now well rehearsed and passionate speech. Eerie echoes of similar meetings, in the 1920ies, and in Vienna of all places, came instantly to mind to this observer, and I am sure into the mind of many an European one. I was personally flabbergasted at the similarities!

But it seems that if Chavez was successful in grabbing the headlines and become closer to become the leader of a brave new world, the neglect of his duties at the summit and his extensive delegation busier at organizing Austrian subversion rather than monitoring hallway gossip yielded to him some unsatisfactory results. In spite of his departure from the Andean Community, the EU decided to keep negotiating with the 4 remaining countries. Mexico protested itself against the abuses of Chavez and Toledo had a rather surprisingly starring role. Chavez is still not closer from killing FTA between LatinAmerican and where the purchasers are.

Oh, and I was forgetting! While in Vienna Chavez decided to use Austrian technology to build cable cars in Caracas "cerros" (a gross mistake for a future post), offered to give oil to the European poor (who benefit from a welfare state the envy of the Boston "poor") and after PetroSur and PetroCaribe there will be a PetroEuroAmerica... But no declarations of Chavez on how is he going top pay for this as HIS Central Bank announces more, and more extensive losses!

The visit that has yet to start has already made quite a lot of ink run. Be it from Alek Boyd who made it to the Times to protest London Mayor receiving Chavez, to the Prime Minister itself that emitted a warning at the Vienna summit. Interestingly the BBC titles that "Chavez to ignore Blair" when we all know that if it were up to Blair Chavez would not even land at Heathrow. Then again the BBC is rather mercurial in its news coverage on Venezuela, though more and more pro Chavez, NYT style. El Universal, more circumspect, say that "Blair and Chavez will not meet".

But that London visit is expected to be more positive for Chavez. ABN is already publishing the extensive support of Ken Linvingstone to Chavez. Longer article than any written on the Papal visit... (1)

Thus it remains that slowly but surely Chavez is building an international network that is starting to have an effect on foreign leaders and their interests. For many years, even in Venezuela through the ambassadors residing here, nobody paid attention to Chavez, be it Lula sending him gasoline in January 2003, or the French making business with Chavez through an openly supportive naive ambassador. Now Brazil lost Petrobras to Chavez’s pupil, the Sem Terra look to Chavez and not to Lula, France lost Total in Venezuela and is about to lose Sincor, and the Spaniards are losing big in Bolivia too in spite of a rather servile attitude to Chavez. There were bloggers warning them for the past three years but our predictions were never heard. But Fox and Toledo are showing the way, how to counter Chavez. We'll see if it works, or if it is too late, or if others have the will and the guts.

But it does not matter, for the time being Chavez is a star, the new Stupor Mundi. And perhaps, in the long run, he will be as ineffective as his predecessor was.

1) At any rate, there will certainly be more to write. It certainly creates an excitement there as not only Alek writes for the Times but yours truly might be on one of the BBC radio stations Sunday evening: it seems that the views on Chavez are not uniform between the BBC.
Posted by Daniel at 6:32 AM